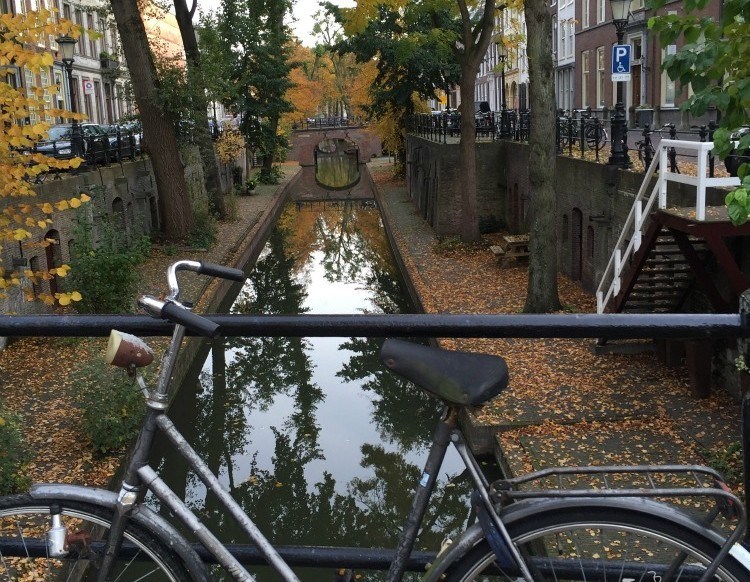 We went back to Utrecht with a kid-friendly itinerary. Back in September for Open Monuments Weekend we spent most of our visit hauling the kids around to things we wanted to see. This time we planned an itinerary just for the kiddos. We took the train, changing from the Sprinter to the Intercity in Gouda and arrived an hour later in the sprawling Utrecht train station.  Most everything in town was just opening when we arrived at 10:00. We took a little stroll around town to check it out. Prior to arriving we booked tickets for the 11:00 boat tour. Last time we were in Utrecht H saw a boat tour and insisted that we do a tour the next time we were in town. Even though we walked much of Utrecht on our last visit seeing it from the canals gives you a new perspective.

My favorite part was seeing all the bridges from the water. The lamp posts around town have tiles on water level that have given the bridges or canal areas their names. There is even a new one of King Willem.

The tour was given in Dutch, English and German by the same tour operator – he was amazing. The tour company gave H some postcards to color and a set of colored pencils. This kept him occupied for most of the trip. We fed O a ton of snacks on the boat to keep him quiet. In the middle of the boat tour, the captain had a youngster go up and steer the boat. It looked like the prime age for this special treat was about 10 years old.

After the boat tour we grabbed lunch. There are so many good options in all of these towns. Take a look at the menu and see if they have something you would like. There is a free English walking tour given on Saturdays and Sundays in Utrecht, except in the winter. The tour lasts three hours and starts under the Dom Tower. We dropped my mom off to take the tour and headed off to surprise the kids. The Utrecht Railroad Museum was hosting Chuggington and we had tickets! (Actually it turns out it is covered by the Museum Card.) This museum is amazing and should be on any Utrecht itinerary with kids! They re-purposed their old station into a phenomenal railway museum. We hardly even got to explore the actual museum because the kids were so overtaken by all the Chuggington Fun! The highlight for both boys was the enormous play area of Chuggington toys. This was a kids-only area so prepare to sit on the wall and let the kids play. I was so nervous about setting the boys free (I’m so American!) to play while I sat on the sideline. I let H know where I would be and set him free. Once I saw how well everyone was playing I even let O down into the play area although Jeff jumped in a few times to keep him close to us. There were plenty of toys and the staff monitors did a great job allowing the kids to play. There was a whole room of beanbags with Chuggington playing on a projector screen in Dutch. The boys loved sitting and watching a few episodes. It was probably a great way to learn some Dutch! The museum had tons of special vendors available for food and drink. We had already eaten lunch but did grab an ice cream cone for just a Euro. (We were not fans of the pear… but it seemed to be a fan favorite.)

The museum has a great playground, a small train, some interactive rides and a little model railroad in addition to their collection of trains. We cannot wait to go back and spend some time in the actual museum learning about trains. We did spend some time checking out H’s favorite – switches! The museum has a working switch house. You can see the chains working the switches and signals in the track below. They also have examples of the different types of railway signals. Things were winding down on the Chuggington event so we headed to meet up with my mom after her tour. We had planned to grab dinner at Cafe Olivier.  Cafe Olivier is built in an old church. It looks incredibly cool with a good menu. We will make it there eventually! Most places in the Netherlands do not start serving dinner until 5:30pm. Since we were ready to leave around 4:30 we just hopped on a train to head home with plans to hit a grocery store and make dinner.

Unfortunately due to some issues with the trains our train sped through our station and went instead to Den Haag. We rolled with it, grabbed some dinner in the station for the boys and got on a train headed back to where we left our bikes. When the train arrived there Jeff grabbed some takeout pizza while I took the boys home for bed. It wasn’t our best meal. I’m sure Cafe Olivier would have been much better but it got us all fed and to bed on time.