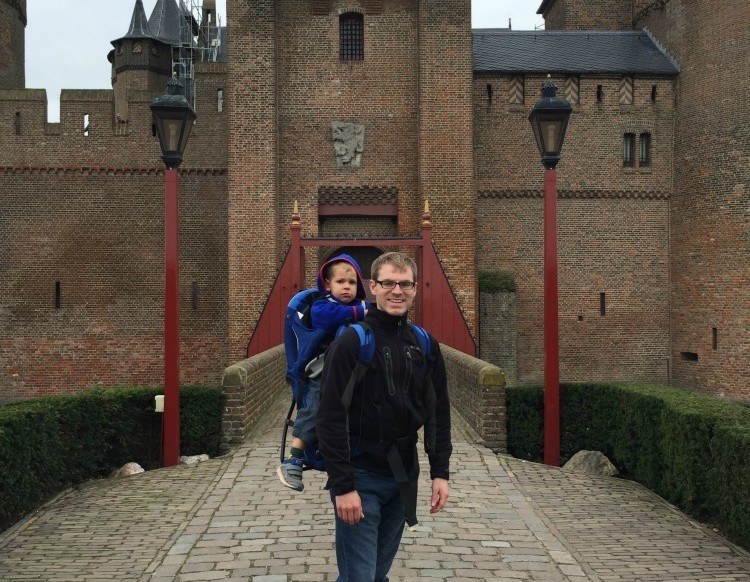 You’ve probably never heard of the adorable Dutch town of Muiden. I certainly had not before my husband suggested a quick day-trip to this city outside of Amsterdam. Muiden has played an integral part in the defense of Amsterdam for centuries and is now a perfect day-trip that affords you small-town charm, a stunning castle and an amazing fort.

We drove from Delft and parked in the free parking lot just outside of town (Park and Ride, Maxisweg). The public transport option involves taking a bus from Amsterdam, which can be lengthy. The town only has two bridges and one is closed to cars on Sunday, so it’s not worth driving around town to look for parking. The walk from the parking lot is well signed and gorgeous. The lot was pretty full when we arrived but people were making their own spaces so we just joined in and parallel parked next to the curb.

Muiden was hosting a sailing contest the day we were there. The harbor was full of tall ships getting ready to head out. The bridges were in constant motion letting the tall ships in and out. The boys were in heaven!

We are waiting for some ships to come into the harbor.

Muiden is small so it is easy to take a stroll through town. We found a small playground perfect for the kids. The local bakery is the perfect stop for a quick treat any time of day. One of the things I love about walking through Dutch towns is peering through the windows. It’s a very Dutch thing to do. Everyone decorates their windowsills and accents them with flower boxes. Muiden is no exception. Model ships filled the windows lining the harbor. I came across this incredibly pink hydrangea in a flower box.

Other than just enjoying the town and waterfront, the two big attractions here are Muiderslot Castle and the ferry out to Fort Pampus.

Muiderslot Castle is a square-shaped medieval castle complete with a moat and drawbridge.  The castle hosts a national museum focusing on castle life and is part of the Museumkaart program.

Muiderslot Castle is basically the Look Inside A Castle book brought to life! I could not believe how much H had learned about castles from this book that he pointed out to us in the museum.

The museum has tons of things to touch and is extremely kid friendly. There is an entire room where you can dress up as a page boy, jester or lady in waiting and prepare to be a knight! Little O was a huge fan of the beautiful formal gardens. He loved running around them and even tried to pick some of the vegetables that had been left on the vines. The gardens oozed of autumn with all the vines a brilliant yellow.

There was even a Falconry demonstration held in the center of the castle courtyard. The falcon flew right over our heads.

When the kids lost interest we moved up to the sentry walk and watched a bit from there. Muiderslot Castle has two separate, unconnected, sentry walks so that the entire castle could not be taken at once. They’ve now connected them with a suspended walkway.

Fort Pampus is a 19th century sea fort that is part of the waterline collection of forts used for Amsterdam’s protection. The fort is on an artificial island that can only be reached by boat. There is a ferry that runs out to Fort Pampus every hour (seasonal service), or you can take your own boat.

The ferry typically leaves from the harbor in town, but due to the sailing festival during our visit, the ferry was leaving from the dock at Muiderslot Castle. The fort itself is part of the Museumkaart program, but the ferry is a separate fee. If you do not have a Museumkaart, you can buy a combo ticket for ferry and entry.

The ride out to the island was twenty minutes, smooth and scenic, only enhanced by the plethora of sailing ships. Once on the island everyone headed for the cafe. We grabbed some English audio guides (free from the gift shop attendant) and headed into the fort. The audio tours only work when you are in an area with a sensor. These areas were marked on our map, but with H leading our exploration we only managed to find one sensor. I was impressed by the amount of touch stuff available in the fort. H was entertained by the interactive displays. There was an area where we got to load the (pretend)  gun powder and raise the explosives up to the top floor using pulleys. There were long, dimly lit curved tunnels running the circumference of the fort we ran through. This fort had more small rooms than I have ever seen in a fort. You can even venture onto the roof for a better look at the harbor entrance. The two giant guns are no longer there. They were removed and melted down by the Germans during WWII to make more ammunition.

Once we were done exploring we headed into the cafe to grab some food. Picnicking is not allowed on the island so your only option for a real meal is the cafe. We were not disappointed by our selection. I had an amazing salad with melted cheese on top – yummy. We did not try the cakes, but everyone getting off the boat was having cake and tea and it looked divine. We finished eating just as we saw the boat heading back to the island and decided to hop on and head back to town.

If you are heading out to Pampus bring an extra layer for everyone. When the wind picks up it can get chilly on the island. We saw a few people with strollers, but left ours at home opting instead for bookbag style carriers for both the boys. We left the larger carrier in the coat room while we explored the fort letting H be our leader.