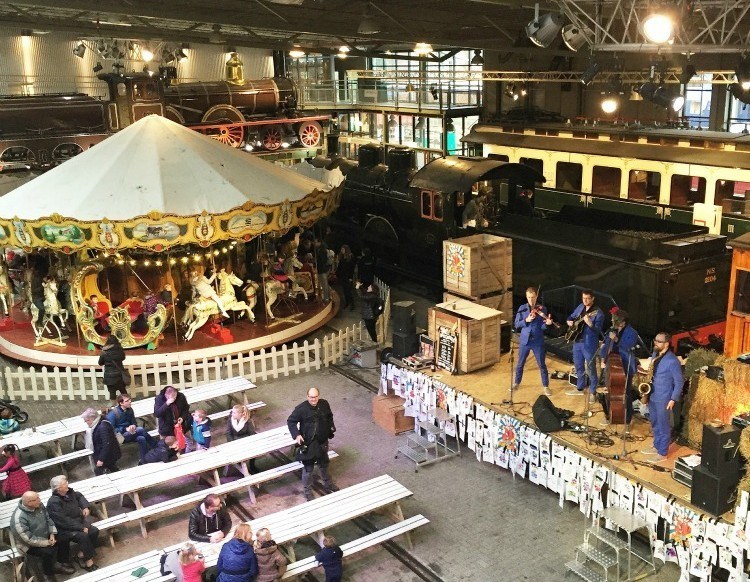 We have two train loving boys, so we instantly fell in love with the the Utrecht Train Museum. Thanks to the Dutch MuseumKaart we can stop by and check out all their events at no additional cost. The entire museum was given a holiday touch. A carousel is prominently featured when you walk in and is included in your admission. Humoring our kids with ride after ride, we started our visit off right. We could not pass up the holiday craft table. There were several crafts to choose from each costing a few Euro. H chose to decorate a cupcake with fondant. I’m pretty sure it is because he wanted to eat the cupcake, regardless he was into it. With the craft finished we coaxed the kids on to the theme ride we passed up last time. You load your family onto a little train car which rides through a train yard. It’s a bit dark and even features a small drop. H was a bit scared but in the end liked it. It was worth the 15 minute wait, but with kids who are 1 and 3, I would not recommend the ride if the wait is long. We grabbed some lunch at the on-site cafe and enjoyed the band who took the stage. There were plenty of food and drink options including several vendors there just for Winter Station. O was particularly transfixed. There was a brick oven pizza food truck, a burger cart, a ski bar serving drinks and a waffle cart. While O took in the band I walked around with H to see his favorite exhibit, the model trains. He loves to point out all the ones we have ridden in before. One of the big draws of Winter Station is the ice skating rink. This year it was located in a heated tent out back. In previous years, the ice rink has been inside the main museum hall, literally around the trains. Skates are free or you can bring your own. We thought this was a perfect time to get H some ice time. He has a blast learning to skate and keeps asking to go back. There were two-bladed strap-on skates for kiddos and walker devices to help kids keep upright. O was getting pretty tired so he dozed off in the stroller for a bit. I grabbed a coffee and an Apple Flap and enjoyed watching Jeff and H take laps around the rink. On the way out of the museum we walked past a wall of notes to Santa. Although we visited in the New Year H could not resist getting the chance to hammer his name into this wall. What kid doesn’t love using a real hammer and a nail. He was surprisingly accurate with his hit. Jeff’s fingers were unhurt. I don’t think I mentioned on our last visit how much I loved the sinks in the bathrooms. (Jeff tells me they have these same ones in the men’s room.) I made sure to grab a picture of these old round sinks this time.