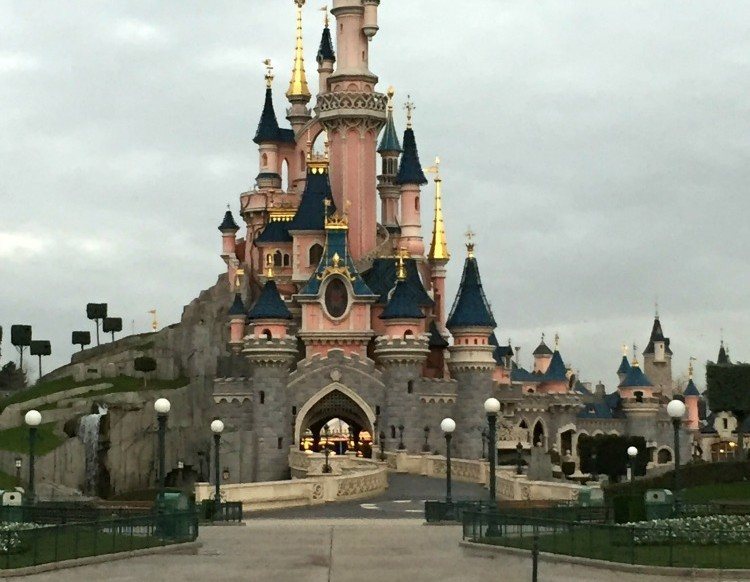 A Winter Visit to Disneyland Paris

Our kids are right in the zone for a character-filled visit to Disney. We spent a week at Walt Disney World before we left the States and had a blast, so when I found a deal for a February Disneyland Paris visit we booked right away. We did not tell the kids. I found the package through the Disney Paris Netherlands webpage. (The deals were better on the Dutch and German pages than on the British or U.S. pages. Use Google Translate and you won’t have a problem.) The only hitch we had was that when we checked in, the staff thought we spoke Dutch so our welcome packet was entirely in Dutch. There are lots of winter deals to be had because Disneyland Paris is cold and rainy in February!

Our deal included a 2-night hotel stay at the Sequoia Lodge, half-board plus for each person over 2  (two breakfasts, two three-course meals in a park table service restaurant, and two snack vouchers) and three days of park hopper tickets. We took the Thalys from Rotterdam to the TGV in Brussels and on to Disney Paris directly (Marne la Vallee station). You can book the whole voyage through SNBC Europe. Jeff has an app on his iPhone that lets us see how fast the train is going. He regrets missing out on a photo when we were going 182 mph.

Once you arrive at Disney Paris you can easily walk to the on-property hotels, or you can take the bus to your hotel property. They honestly take about the same amount of time. So when we were heavily laden with our bags, we took the bus but otherwise we walked. We were checked into the hotel and were in the Magic Kingdom by 1:30pm. Delft to Disney in 4 hours!

Winter means lots of closures, so check when you book to make sure you are not disappointed. Quite a bit of the Magic Kingdom and Disney Studios were closed during our visit but my kids are young enough to not care, or really know the difference. It was cold and rainy for much of the visit, but we bundled up, brought rain gear and went on our way. Almost all of the queues are covered or inside. Our first half day was by far the wettest. We were in the Magic Kingdom from 1:30pm – 6pm. We rode Dumbo, the Carousel, Small World, Pirates of the Caribbean, the Alice in Wonderland Maze and Autopia. We never waited more then 20 min for a ride. We also used our first snack voucher, a choice of a doughnut or ice cream bar and sparkly water, OJ or a hot beverage. We gave H some pins when we visited Walt Disney World this summer for him to “trade” with Cast Members at the park. It is a great way to help H learn to talk to adults. It is also a great activity to burn some time, hide from the rain or help us wait in line. H brought 6 pins with him to Disneyland Paris and traded all of them multiple times over, practicing his French with each trade. We found the most success trading in stores, as the Cast Members outside had their overcoats on so we could not see the pins. At 6pm we had dinner reservations at Inventions , inside the Disneyland Hotel for the character dining. (This meal is not part of the half-board program.) The first half-hour we were the only ones there, meaning lots of quality time with the characters. Mickey, Minnie, Goofy, Pluto and Tigger all spent time joking around with both boys. The buffet was impressive. We all left stuffed and happy. Breakfast at the Sequoia Lodge, included with the half-board meal plan, is perfectly sufficient but nothing special. There were a variety of breads, yogurts and cereals. We made 7am reservations, although they tell you these are merely guidelines. At 8am we were inside the Magic Kingdom for their extra magic hours for park guests. From 8am to 9am the park was completely empty. We walked on to Buzz Lightyear, the spinning Rockets, Space Mountain (Jeff), Dumbo, Pinocchio and the Carousel. The kids enjoyed the empty park and took advantage by running up and down Main Street and exploring around the castle. At 8am there are also tons of characters in the park with virtually no lines. We were the first ones to meet Donald Duck at the gazebo and saw Chip & Dale on our walk down Main Street. The park opens to everyone at 10am and the crowds pick up. We spent the rest of the morning riding Autopia, Small World (back to back due to no line), the Casey Jr. Train and the Storybook Boats. We had an 11:30 lunch reservation at Blue Lagoon in the Pirates of the Caribbean ride. Our half-board plan included three courses for us and H. The staff brought a plate so we could split the food with O. H got to meet “real pirates” when the pirate band came through.

The kids were zonked so we walked back to the hotel for some rest. O fell asleep on the walk home. After a bit of quiet time, but no one actually sleeping, we headed to the pool for the remainder of the afternoon. The Sequoia Lodge has a great pool in a detached building. There is a waterslide that H loved and a small kids splashing area that O enjoyed. They have plenty of flotation devices and some toys. There are changing facilities at the pool so come in your clothes and change there to stay warm.

Still pretty full from the three-course lunch we grabbed a quick dinner at Earl of Sandwich in Downtown Disney. The kids were asleep by 6:30 and Jeff and I not far behind.

The next morning we got packed up before we headed to breakfast and checked our bags with the bellman. After breakfast we headed back to the Magic Kingdom for those amazing extra magic hours. Once again we were the only ones in the park! The boys took advantage of the Main Street vehicles riding them up and down Main Street. We once again walked on to Buzz Lightyear, the Rockets, the Carousel and Dumbo. The kids wanted to have a few more character visits so we met Minnie & Mickey and Pluto & Goofy again. I was so impressed by the characters here. They spent time with the kids, playing and interacting with them. H and O had glow sticks because it was still nearly dark at 8am. The characters enjoyed pretending the glow sticks were light sabers. How fun! At 10am we were waiting at the gates for Disney Studios. There is a really limited selection of things to do here for kids so we knew that a half-day would be plenty.We immediately walked back to Ratatouille and got Fast Passes. Even heading right there, the earliest time we could get was 11:10. We rode the Cars Ride (like the teacups) and checked out the Toy Story Land, but determined the rides were too intense for our little ones. We popped into the Art of Disney Animation just as it started to rain. The kids actually loved this two-part show. Jeff loved the animation camera you can see in the lobby. Then it was off to use our Fast Pass at Ratatouille. We had 11:30 reservations at the Ratatouille restaurant. Again, our half-board included three courses for Jeff, H and myself. The food was good and the service here was excellent. We hit the 1pm Disney Jr. Live! show in English. If you want to meet Jake or Sophia at Disney Paris come early to the Disney Jr. show.  There is a dance party led by Jake and Sophia. O was overwhelmed, but H joined in the dance party right away. The Disney Jr. Live! is similar to the ones we’ve seen at Disneyland California and Walt Disney World. It features Mickey Mouse Clubhouse, Handy Manny, Little Einsteins and Pooh & Tigger.

We ran  over to the Stitch Live! show in English right next door. It is similar to meeting Crush at Disneyland California and Walt Disney World. It can be a little intense as Stitch is fleeing from the space police but my kids both enjoyed it.

It was clear the rain was coming but we rode the flying carpets twice in a row in a light rain before leaving the park.

We picked up sandwiches for a train dinner at Earl of Sandwich and sent Jeff to go grab the bags from the hotel. The kids and I headed back into Disney Studios to use our last snack voucher before we left. (Vouchers have to be used after 3pm, which is annoying but we made it work.)

We met Jeff back at the train station. This time we took the RER (local train) to Paris Nord and picked up the Thalys from there all the way back to Rotterdam (two hours and thirty-seven minutes). It was a great easy trip, but boy were we exhausted!