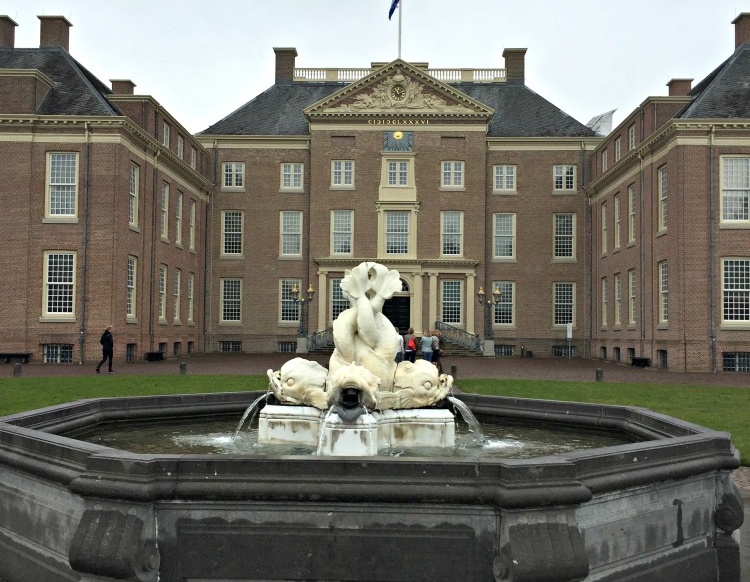 I’m embarrassed to say that Paleis Het Loo made it onto my radar when we visited Madurodam.  I snapped a photo of the palace and gardens, in miniature, and added them to my must visit list. When the perfect spring day presented itself we enlisted some friends to join us and made the two-hour drive East to Apeldoorn. Paleis Het Loo is part of the Museumkaart Program. Admission includes the stables, palace and substantial gardens. You’ll need to retain your ticket as the palace sits inside a public park. Each exhibit requires you to show your ticket. There is a €5 parking fee payable at the admission desk. There is quite a bit of walking between the parking lot and the palace so a stroller or carrier is recommended for the little ones.

The palace tour is stroller friendly, even with our inline double! We were sent to a special door that led to an elevator to make our entrance easier. Backpacks are not permitted and children in carriers must be worn on the front.

We made quick work of seeing the interior of the palace. Paleis Het Loo (The Woods Palace) was home to the Dutch Royal Family from the 17th Century until the 1960’s when Queen Wilhelmina passed away. It reopened in the 1980’s as a state museum and features furniture, paintings, dishes and other royal family odds and ends. The kids were amused by the many hunting trophies ranging from typical antler displays to an elephant trunk lamp. Our four-year-old arrived in full costume, as a king of course, and was treated to the docents asking him which room would be his when he moved in.

Signs in the rooms are in Dutch and English. The kids did not give us much time to read about each and every portrait but descriptions of the rooms were short enough so I was able to read them aloud before the boys wanted to move on. Upon reading the title “Queen Wilhelmina’s Drawing Room” H replied matter of factly, “It’s a lovely room and there is her drawing,” pointing to a painting on the wall. The palace visit (interior) took us under one hour and we were done when the kids were ready to leave.

The typical morning rain and clouds had passed when we exited the palace and being just past 11, we met up with friends for lunch. There is a restaurant inside the palace that looks amazing. We popped in but decided the kids would do better at the cafe near the stables, which also had a playground. The food at the cafe was divine. It is cafeteria style, so you can see all your options. The kids were able to put together their own sandwich boxes and the adults all chose salads. We sat outside to eat while the little ones were amused by roaming peacocks and the older ones enjoyed the palace-themed playground. In true Dutch form we hung out there for over an hour. We hung out at the cafe so long I nearly forgot we were there to visit the palace! The stables are directly across from the cafe. They are perfectly appointed and had a few horses in them. The other areas have been converted into a show room of royal vehicles. The children loved looking at the sleighs, carriages and cars, most of which were run of the mill Fords. With the sun fully shining we tossed our coats in the stroller and set the kids free in the gardens. The gardens are reminiscent of Versailles but on a smaller scale. The children loved wandering around, peering into the water features and playing on the bridges. We ended our trip with tired kids and sun-kissed skin. Palace Het Loo is a wonderful outing for a beautiful spring day. ** Some of the photos in this post were used with permission from my very talented friend, Larissa.