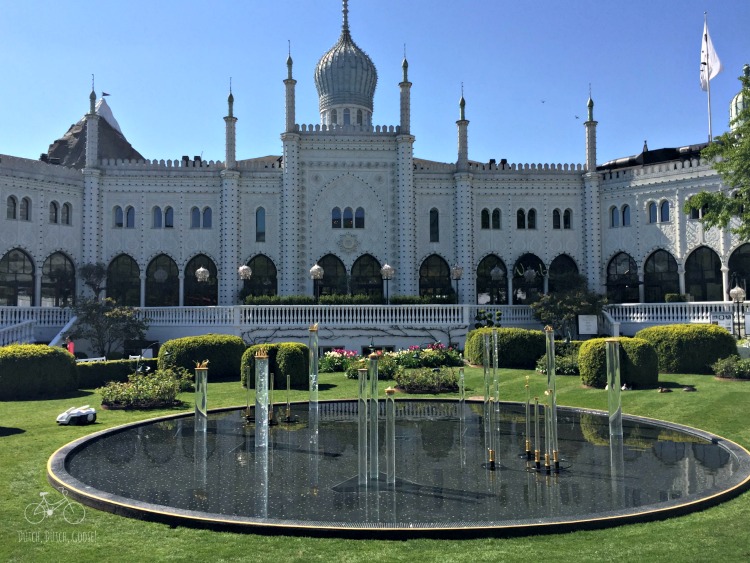 A trip to Copenhagen would not be complete without a trip to Tivoli Gardens. This old school amusement park has been around since 1843, making it one of the oldest operating theme parks in the world.

Despite reading great reviews of the park I thought Tivoli was going to feel more like a fairgrounds than a theme park. I was wrong. Tivoli takes up a big city block in Copenhagen. The park is so well designed though that once you get inside you almost forget you are in the center of a bustling city. The only pieces of ‘city’ you can see from the park are stately, gorgeous buildings. The park still operates on the old system of a simple entry fee and then paying per ride. There is an all-you-can-ride wristband, which we were given to use during our visit. If you do not use the wristband you purchase tickets at kiosks around the park. Rides vary in the amount of tickets required. Most of the kiddo attractions only cost one ticket. In addition to rides there are restaurants, shows, games and gardens inside the park.

Tivoli started out as model gardens from around the world and as such served as inspiration for Walt Disney Worlds’ Epcot Center. Hans Christian Andersen visited the gardens when they opened and was inspired to write The Nightingale. Although the park is now dominated by rides, you can still see the gardens and architectural framework that rocketed the park to popularity. A stroller is highly recommended if you have little ones. There is plenty of stroller parking. Although the park is small there is a lot of walking. There is a park app you can download that provides information on shows, food and attractions. The park has some wifi spots, but it is not available throughout the park.

We did have a small problem with O, the one year old, keeping his wristband on his wrist. They are very strict about needing to wear the wristbands. O was completely against wearing his. A ride operator called customer service to come meet us, they set us up with a little card that is stapled to the wristband so we could carry it in our pocket instead of making him wear it. If you have a little one just ask for one of these cards at customer service before you start your day in the park.

We visited on a Monday, when many other Copenhagen attractions were closed. The weather was beautiful and the park opened at 11am. We were there as the gates opened at 11 and had the park to ourselves for several hours. We did not wait in line for a ride until about 3pm! This is a dream park for families. We were able to ride most of the rides as a family – even with me being pregnant. There are a few high thrill rides that we bypassed that would certainly thrill older kids as well as most adults. Notably the Star Flyer, an 80 meter tall swing ride and Vertigo,  a three axis spinning airplane ride. Jeff has hundreds of hours of flight time but shook his head at Vertigo. Celebrating the park’s connection with Hans Christian Andersen, The Flying Trunk, a 7-minute dark ride, reminiscent of Small World at Disney, gives a synopsis of Andersen’s most famous stories with small puppets. Ask the ride operator to switch your vehicle language, a flying toy chest, to English for the full experience. The ride is a bit steep, so hold on to your little ones. A highlight with our kids is always the cars they can “drive.” At Tivoli the Vintage Car Ride, opened in 1959, allows kids to pretend they are driving cars around a small track that includes a tunnel. We were able to ride this several times in a row early in the morning, with no wait,  to the delight of our children. There are also electric boats you can cruise around a pond. Unlike the cars, you are actually driving these boats. Head to the boats early as the line got long and the ride time seemed to get shorter. Your boat is numbered. A large light board illuminates the boat numbers that need to return to the dock. There are up tot 20 boats on the pond at once. The kids mostly had us floating in circles, but they both loved driving the boats. Jeff and I helped pilot them in at the end of the ride or we would still be out in that pond.

We’ve been on some great carousels since moving to Europe, but the one at Tivoli had some of the best animals to ride. Unlike U.S. carousels, most European carousels have static animals.  Some horses rock back and fourth under the child’s own momentum. Typically a few features will rotate. On the Tivoli carousel H chose to ride an elephant by sitting on a basket. Jeff and O rode on a giraffe that had two seats. On a second ride H and I shared a camel with a similar layout, while Jeff and O took a turn on the elephant. With no lines H took a ride on a kiddy roller coaster and loved every moment of it. He also wanted to try the little kiddy free fall ride and loved that. He built up enough confidence on these two little rides to try the 100 year old roller coaster at Tivoli. The ride has been refurbished but is only towed up the first hill. From there the speed is regulated by a breakman riding on board. H loved it!

The mine ride is a water boat ride through a mine. The cars are equipped with wands. We were never really sure what we were supposed to do with the wands, but we fired them, producing a small sound, as we rode through the mine watching the working dwarfs go about their daily tasks. The kids loved the ride, but I’m still a bit confused. There were a variety of kiddie spin and fly rides, all of which we tried. Our favorite though was the Lighthouse Air Carousel, where peddling causes you to rise and stopping causes you to drop back down. O was actually too little to ride this one. The seats adjust though so even H’s little legs could reach the pedals. There is a similar dragon ride that the boys enjoyed, but no pedaling required. The playground in the kids area is small but packed with winning items. There are some musical instruments for the kids to bang on and plenty of things to climb. The little kids area had a bridge that O loved running on over and over. There are plenty of more challenging climbing items for older kids as well. We were lucky enough to catch a little show while in the kids area. The Tivoli kids’ mascot, Rasmus Klump, the bear, has a hut where he has little shows throughout the day. Although the show was in Danish it was engaging enough to entertain the boys. There was singing dancing and assorted silliness. Our boys even went up and hugged the bear mascot at the end of the show!

Another fun find was the Fun House. We asked the attendant if it was going to be too scary for the kids and he simply replied “It’s a Fun House. It’s fun, not scary.” It is all the silly old stuff you would expect to find in a fun house and our kids just ate it up. They both loved running on the spinning discs and moving walkways and heading down the huge slides. It was totally empty when we were inside which meant we could let the one year old walk on things and try things out as well. We had lots of smiles and giggles in there, proving that newer is not always better. For the adults, there are two giant hamster wheels! O is a huge fan of transportation of any kid. Instead of having a train, Tivoli has small tram cars, modeled after the ones that used to run in Copenhagen. It’s a one-way loop around the park but it was one of O’s favorite rides. I love that we could see most of the park on the ride and wish we had gone at the beginning of our day.

The food was well marked and generally well regarded. There are a ton of options inside the park ranging from sit down to stop by.  We opted for traditional park food, stopping by the aptly named “Hotdog Corner” for organic hot dogs, sausages, pulled pork and fries. The food was perfect and there was plenty of seating in the shade. We packed some snacks as well to supplement.

The plan was to pick up a treat at the end of the day, but when the lines started to grow around the park and we loaded up the kids to find the best ice cream stand (they are everywhere) we found both of our kiddos asleep! Instead of hanging around, we made the walk home with two sleeping kiddos. If we had been without the littles, I likely would have opted for an evening visit to include catching some music on one of the many stages and a sit down dinner. Most Saturdays during the summer season feature fireworks. There is also an aquarium, but it was closed during our visit due to a private event.

Even if you’re not an amusement park fan you would be remiss not to visit Tivoli Gardens on a Copenhagen visit. The history of the gardens is still alive and worth checking out.

We were guests of Tivoli Gardens. They graciously provided us with admission and ride wrist-bands. All opinions are my own.