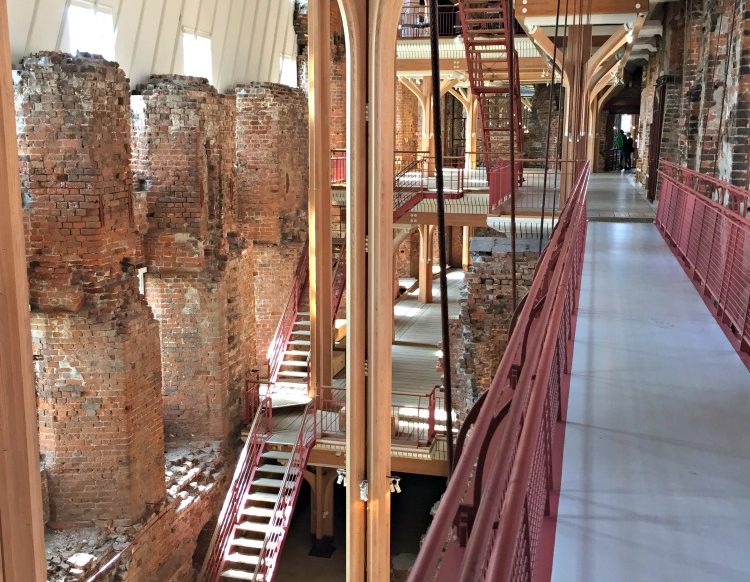 We made an afternoon stop in Kolding on our driving day from Hamburg to Copenhagen. Parking turned out to be a bit of a problem since the city was having a large market. We found some street parking though and ventured through the market to Koldinghus, which actually had its own parking lot we could have taken advantage of. Koldinghus is the beautiful castle that dominates Kolding’s landscape. It sits on the edge of a lake with a lovely walking path around it (including a playground). We didn’t have time to fully explore this path, but plenty of people were taking advantage of the weather and landscape. Koldinghus has something for everyone. There are plenty of museum displays on life in the castle as well as rotating displays. There are special tours for children. We opted to explore on our own since the kids needed to burn off some steam. The castle was left in ruins after an 1808 fire. The renovation beautifully pairs modern architecture that highlights the castle ruins while making the space into usable venues.

Our favorite part of the castle was climbing to the top of the highest tower to “survey the kingdom.” The views were amazing and the tower was nicely gated so the kids could safely explore on their own.

There is a cafe at the castle but the kids were not interested in the amazing-looking buffet (around 135 DKK). Instead we headed into the main square. It’s just a few minutes walk down the hill and into the center of town where there are plenty of great looking options. Foursquare steered us to the The Mokka Cafe. The cafe was offering their summer menu which had five entrees, but everything sounded delicious. This was our first proper meal in Denmark so we were timid, especially with the awkward menu translation from our iPhones. I ordered a burger and Jeff ordered the chile con carne served on rice. The kids weren’t hungry so they split a smoothie and snacked on our food. The Mokka Cafe was incredibly kid friendly. They have a small kids menu which we decided not to order from. There was ample outdoor seating, but we opted for a table at a couch inside.

We were on a bit of a time crunch to get to Copenhagen to meet up with our Air B&B host. We headed back to the car and both of the kids fell asleep before we even got out of town. Kolding was a perfect spot to break up a long day of driving. There is more to explore in the area but we will have to go back for those things.