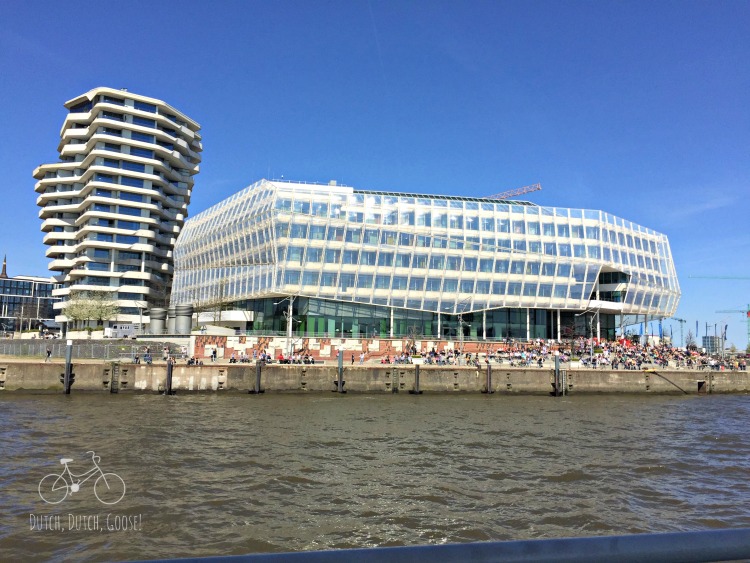 A Day in Hamburg

Our arrival into Hamburg was rough. What was supposed to be a 5-hour drive turned into an 8-hour adventure when traffic came to a complete stop on the highway.

The plan was to leave Utrecht (Netherlands) with tired kids and have them nap on the way to Hamburg where we would arrive for a late dinner. Unfortunately, by dinner time we were in the middle of nowhere stuck on the Autobahn. We took the first rest stop, made the best of the lackluster dinner options and hit up the playground that was miraculously present. We changed the kids into their PJ’s and continued on our way, arriving in Hamburg just before 9pm. The Sofitel in Hamburg was beyond gracious at our arrival. They upgraded our room and even had little stuffed lambs waiting for the kids in the room.

We woke up on Thursday to discover that not only was it the start to the Hamburg Port Anniversary Festival (which we knew about), but that Ascension Day was a German holiday. This pails in comparison to the  surprise my fellow expat travel blogger, Farrah at The Three Under got a week earlier, when she arrived in Hamburg to discover it was Demonstration Day (think riots).

Our chosen breakfast bakery, Le Crobag, next to the hotel, was closed, but the hotel called around for us and found out that the Starbucks across the street would be open at 8am. (We did stop at Le Crobag the next morning on our way out of town for lovely pastries, but don’t expect a hearty breakfast.) Our first stop of the day was Miniatur Wunderland, an enormous model museum that is absolutely incredible. Reservations are suggested and can be made on their webpage (here) free of charge. I made the earliest possible reservation (between 8-9) and received a 10% discount for coming early. Going early means you will have the place to yourself for about an hour before it gets quite crowded. (We were there on a holiday, but we were told it gets crowded most days.)

The best advice I can give is to take the elevator up to the top floor and head straight for the airport layout. The airport layout got crowded fast and stayed crowded. (Watch a video of one of the model airplanes take off here.) The airport was completed in 2013 at the cost of 3.5 million Euro. Simply amazing. The displays are incredible and full of detail.  Day and night rotate through the displays about every 20 min. In addition there are “fires” that happen in the towns and emergency vehicles rush to the scene to put them out. You can peek into circus tents and watch the acts. Boats move throughout the port which is filled with 30,000 liters of water and has a 4 cm tidal range. Every single display has something to offer. Las Vegas at night was one of our favorites because we have previously spent enough time in Las Vegas that the models really reminded us of the place. The entire place is equipped with standing benches and rails. It was so nice to not have to hold the four-year-old up to see everything. It also meant he could move around and see things at his pace. On the second floor in the cafe’s additional seating area there is a children’s play area. My little guys loved driving a model train of their own, controlling the speed and signals. There were also Lego trains to play with and some fire trucks. A small “gym” area is also available but we found it sparse. The next stop was the ruins of St. Nicholas. This church was bombed during World War II taking out the middle of the church. The ruins remain as a monument to peace. The remaining tower is currently under scaffolding to shore it up, but when open, it houses an information station and an elevator is available to go up the tower. Even without the tower visit, St. Nicholas church is quite beautiful and worth a quick stop. I made (unnecessarily) lunch reservations at the Mama Trattoria based on some reviews. This incredibly child friendly cafe serves delicious food. We ordered a few items and shared as a table. They were happy to give us a small box to take home the leftover pizza.

We wanted to take a cruise around the harbor and the hotel was happy to call around to find us a spot. I had looked prior to our trip, but wasn’t sure what our afternoon would look like with the harbor birthday festival going on. The tour book suggested just hopping on the public ferry but the hotel talked us into a tour that turned out to be amazing. We ended up booking with Abicht and riding on the Hanse Star. The  2pm tour was given in English, was incredibly informative and took us right up to several large container ships, in addition to hitting all the harbor highlights. Additionally, Jeff was able to have a drink on board, H got an ice cream and O lounged in the stroller. It was one of the best harbor cruises we’ve ever been on. I suspect that the tour is typically given on a much smaller boat, but I can’t be sure.

The harbor area was crazy crowded and we had a toddler trying to sleep in the stroller. We went to check out the old Elbe River tunnel, but it was  so crowded, we backed off and decided instead to take a walk. We walked a few blocks away from the waterfront to the city park, Planten un Blomen. There were playgrounds, water features and beautiful lawns and gardens. The park hosts a water and light show starting May 1 and running all summer. All of Hamburg, that wasn’t down at the harbor festival, was at the park. When we found the first playground O was asleep in the stroller. I found a shady spot to sit and Jeff and H went off to play. Once O woke up we walked the park a bit more to find another playground that looked amazing, Buller Mountain Playground.  It was completely overcrowded. H took a turn on a few of the climbing apparatus’ but after being knocked around, he asked to leave. O didn’t even want to give it a try. Crowds are not his thing.

Everyone was feeling tired so we made the 20 min walk back to the hotel. Every restaurant we passed was closed and no one felt very hungry. I suggested a smoothie though and the whole family was on board. So . . . back to the Starbucks with the rest of the town. haha. We picked up some smoothies and extra cups, went up to the room and turned the harbor birthday boat parade on the TV.

Hamburg turned out to be a pretty great day!