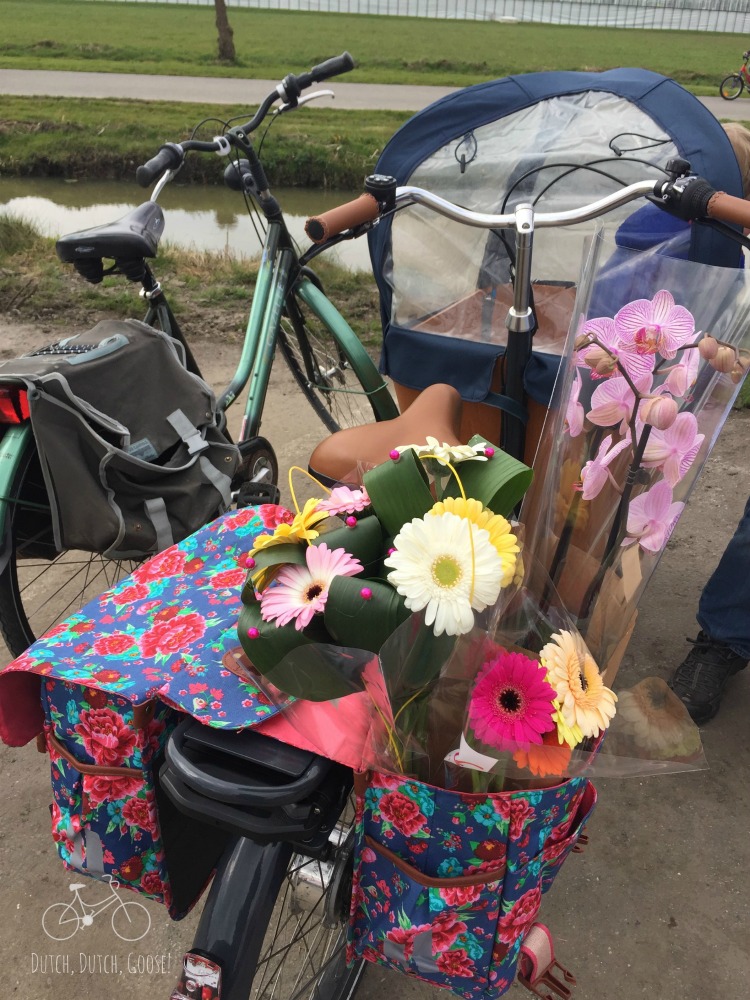 When we made the move to the Netherlands we left behind my car, opting to just bring Jeff’s smaller vehicle with us. My car was swiftly replaced by my mamafiets (a mama bike) upon arrival in August. In late November I added a Bakfiets for some extra cargo space. It also provided a better option for transporting the kids in bad weather. I no longer had to put the banana rain suits on the kids just because we were headed somewhere by bike.

Front baskets and carriers are very popular here, but they don’t work for me since I have a baby seat on the front of my bike already. I have double panniers on both bikes from two different companies.

The blue & white bag on the mamafiets is from New Looks. I ordered it off of BOL as soon as I realized that using bungie cords to carry the diaper bag wasn’t going to work. They are made of waterproof fabric which is necessary here. Everything seems to stay pretty dry inside. They are no-frills open bags, meaning that when you open the top, it’s just a bag. There are no extra compartments or pockets. This makes it easy to put my groceries or rain stuff in and I can put an egg carton right on top!

Even with all the interior storage space of the Bakfiets I realized I was going to need some storage outside of the main cargo section. (This will be even more true once I add a third little into the box.) For the Bakfiets I went with Basil Panniers. These have lots of internal pockets, which means I’m able to keep things a bit more organized. My milk bottles fit perfectly into the interior pockets, and there is still plenty of room for my eggs. The cinching cord keeps everything intact and also makes me feel a bit better about leaving things in the panniers when I run into the store. An added ‘perk’ is that my coffee fits in the outside pouch. “To Go” coffee is not really a thing in the Netherlands but sometimes I like to pick it up and have it to drink when we get to a park. On the day I took this picture I got caught at a raised bridge and enjoyed my coffee watching the boats through.

I think finding the right panniers is a matter of personal preference. Jeff won’t give up his bright teal panniers from his Boy Scout days. He loves that they are easily removable and he can carry just one if he chooses. The gaudy color also helps him find his bike in crowded bike racks.