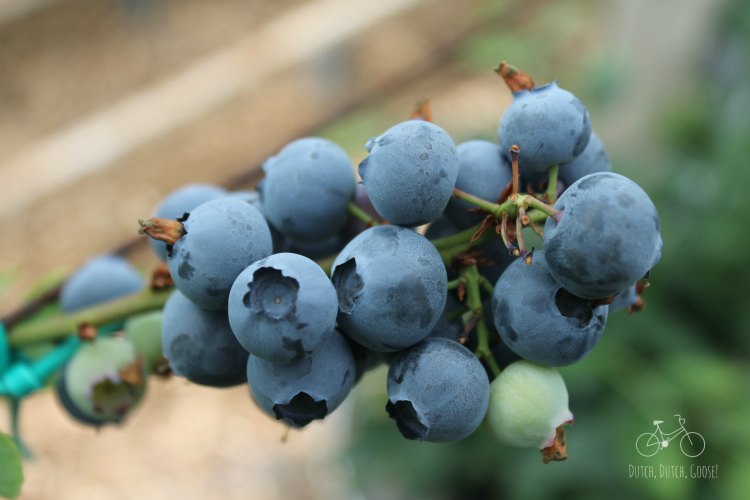 Fruit Picking in the Netherlands

Summer feels like the season to go pick some fruit. We had a great apple farm in the fall and I’ve been looking for more options ever since. So, when Jeff sent me an e-mail asking if I wanted to pick him up from work with the kids to go berry picking I was over the moon. Little did I know we would find a fun little place to return all summer. Plus who can resist any outing where you come home with some delicious berries! Framblij, a little farm in Monster, Netherlands, has you-pick-fruit from May through October. We did get to chat a bit with the owner who continues to stagger planting in the greenhouses hoping to eventually have year-round picking available. The farm is only open limited hours for picking on Wednesday afternoons and Saturday mornings.  (You can also book a party there by reservation.) When we arrived on a Wednesday, an hour before closing, the parking area was packed! The pricing scheme is a bit strange, particularly if you’re used to an American system of pick as much as you want and pay at the end. You pay for “tickets” in the cafe area. Tickets are €2.50/each. Each ticket is worth a different amount of a particular fruit. In short, you have to decide how much of each fruit you want before you see it. We were able to bend the system a bit and buy an extra crate of raspberries while picking. You’re not going to find cheep fruit here, but it is farm fresh and you get to enjoy picking it.

Note: You must have cash! On this particular Wednesday in June they had cherries, raspberries and blueberries. They had some strawberries earlier in the day, but all the ripe ones had been picked by the time we got there, so that was no longer an option. They are also growing less common berries and several “jam species” but neither was available for picking during our visit. The fruits are spread out over several greenhouses. Each greenhouse has someone to collect your tickets and monitor your picking. The vines are well marked as to which are ready to pick on a particular day. Children are given a bucket that hangs around their neck to collect what they pick. We started with the cherries. We needed three tickets to fill our pint container. The boys had a great time finding the cherries to pick and carefully cutting each one to fill our containers. The cherries were in great shape and there were many ripe ones to choose from. The blueberries were a bit more well suited for the two year old to help pick. We needed one ticket per clamshell (single layer). Our favorite fruit to pick was the raspberries. There were so many ripe ones, and from the looks of it many more to come. Raspberries also happen to be one of our very favorite fruits. We filled two containers quickly and were able to buy a third container right there in the greenhouse. H and I laughed each time a raspberry popped off the vine. That little hole in the center leaves behind a green nub on the plant and the feeling of separation is fun. It really makes you appreciate how delicate these fruits are. The raspberries were a bit harder for the two year old to pick. He loved trying though. The raspberries are €2.50 for a single layer in the clamshell box. Framblij also has an adorable cafe where you can grab a treat and some coffee or tea. When we were there they had muffins, cake and even homemade popsicles the kids were enjoying. There is a (very) small indoor play area off the cafe. A larger outdoor playground has some rabbits and small horses you can pet. I did not fully check out this area as our hour before closing was eaten up by berry picking, but I plan to return when we have more time.