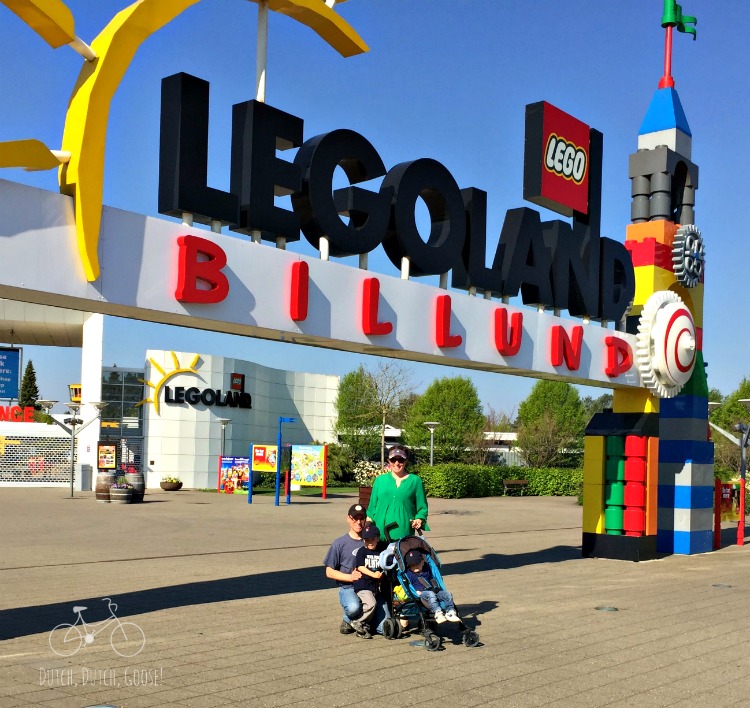 Legoland in Billund, Denmark is the Original Legoland. It opened in 1968, right next to the Lego factory. We knew that a trip to Denmark had to include a visit to the home of Lego. Our visit was a bit bi-polar. We loved Legoland. It was perfect for our four and two year old who could ride nearly everything and were completely enchanted by the mini-world. We were worried that we would not be able to fill a full day in the park, but stayed from opening to closing. Everything else about our visit to Billund, from lodging to food, was disappointing and expensive. During our visit (early May) the park opened at 10am and rides closed in the park between 4 and 5pm. The park is actually open for an additional hour though if you want to enjoy min-world. We ran into another family who was homesteading at a euro-campground about an hour away and day-tripping to the park. I highly reccomend this over what we did.

I’ll start with the disappointments so that I can end the post telling you about how much we all loved looking at the cities of Europe made from Legos. Hotels in Billund,  associated with Legoland or not, are expensive. Sure, everything in Denmark is expensive – that’s what it is. But the value for the price in Billund was quite low. We paid more per night to stay in Billund than at Walt Disney World in Florida and received none of the perks. We stayed at the Legoland Pirates Inn, which is part of the Holiday Village. The Holiday Village includes self-catering cabins and a campground. Farrah, over at The Three Under, stayed at the Legoland Hotel and had a nicer experience. The room we were in was a juxtaposition of over the top Lego touches with bottom of the line motel accommodations. The room had a bunk bed and a double bed, so plenty of space for our family. There was also a small Duplo table and treasure-chest full of Duplos for the kids to play with. The door to the room has a round window that is frosted but cannot be covered to prevent light, an issue in the summer in Northern Denmark where sunset was at 9:30pm. The bathroom featured a toilet, shower head, sink and a large lego spider. the shower curtain pulled between the toilet and the shower head, but the floor of the bathroom filled with water with each shower. The rooms mostly face the parking lot.

I should also mention that Billund is home to the second busiest airport in Denmark and it is located across from Legoland and behind the Legoland Holliday Village. If airplane noise is going to disrupt your sleep, this is not the place for you.

On our second night in the hotel, around midnight, we had someone bang on the hotel door repeatedly. The person said she was a staff member locked out of the hotel. We obviously didn’t answer the door and Jeff asked the person to go away. Honestly, neither of us really slept well after that. We informed the manager of the hotel in the morning. As we were checking out he appeared with a plethora of Lego gifts for the boys as an apology for the interruption. He was very apologetic and even followed up with a phone call to let us know they were looking into if it was in fact a staff member or someone else on the property. Our room fee, while quite expensive, included breakfast, parking, use of the grounds and our Legoland tickets. Breakfast was the highlight of our stay. There was an incredible spread of food at breakfast including make your own (American style) pancakes that the kids loved. There were two large Lego displays of pirates the kids were enamored with, a large Lego pirate the boys posed with for pictures with and a staff that went out of the way to make the boys feel welcome. The grounds had a few playgrounds, a jumping pillow and a petting zoo. The Pirates Inn is kitty-corner from the park. It takes about 5 minutes to walk to the park from the hotel. We looked into a few non-park hotels in the area but all seemed to cost about the same. There is a water park resort, Lalandia, that is supposed to be quite fun as well. Lalandia is located across the road from Legoland.

The blog, Travel with Boys, has a wonderful rundown of your options for lodging in Billund thats worth reading for planning your trip. It may have saved us a bit of trouble.

Food in Billund was also an issue. My research prior to the trip had revealed this. When we rolled into town in need of diner I turned to my typically reliable FourSqure for a recommendation. Restaurant Billund in downtown gets some of the best reviews, so we rolled in to the completely empty restaurant. (Restaurant Billund is also on the Trip Advisor “Top 10 Restaurants in Billund” list. ) The menu here is concerningly huge. We ordered two pizzas to share and some sparkling water. We had seen quite a few people picking up pizza from here so figured it was a safe bet. The sparkling water, which came in a huge glass, ended up being really, weirdly expensive. The pizza was fine. There was a weird collection of people sitting around in the “waiting area” at the back of the restaurant too, like groupies of the owner.

As I mentioned, breakfast at the hotel exceeded our expectations.

Having read terrible reviews of the park food we opted for traditional theme park food for lunch. Low expectations are always good in a situation like this. We had also packed tons of snacks to supplement. H and I ate hotdogs. They were fine but not nearly as good as the ones we had at Tivoli. The stand we grabbed the hotdogs from did not offer anything else so we were glad to have the snacks. O and H split a chicken sandwich from the hamburger place.

We weren’t going to risk it for our second dinner in Billund so we rolled over to the Super Brugsen grocery store and picked up a picnic dinner. We went back to the resort and spread out a picnic blanket on the lawn of the pirate ship playground. We had a lovely dinner while the kids played. There are also plenty of picnic tables available around the property. Luckily the park, which is the whole reason we were in Billund, was lovely. Jeff and I have been to the park in California before we had kids and I loved the Billund park even more. It is small, clean and just so cute. With the exception of poor food options, it is just lovely. Our kids were the right age to enjoy nearly everything Legoland had to offer. There were a few high thrill rides we avoided, but we spent our entire day at the park.

Our visit, mid-week in the second week of May fell just after the Denmark School Holiday and just before the German school holidays meaning the park was empty. When we arrived at opening we assumed the crowds would pick up as the day moved on, but they never really did. This likely added to our enjoyment. We hardly waited for a ride and when we did it was a minute or two. Much to my enjoyment the carousel horses at Legoland cannot accommodate adults, so Jeff was given a stick horse to use while H enjoyed his Lego horse. The Duplo play area was a favorite with our 4 and 2 year old. It’s nicely gated and has plenty of seating for the adults. It completely lacks shade though so if you’re there on a sunny day, like we were, it will be hot. Our transportation loving kids were thrilled by the train that moves around the little kids area and mini-land. O and I rode that so often that we met the train driver. She also gave O a button for his birthday celebration, which he wore with pride all day.The little boats you can actually drive past landmarks of the world made out of Legos was another favorite. There was also a monorail and Lego airplanes to ride. There is an interactive Lego firetruck ride that is a race to put out a fire. We were the only ones there so we “raced” ourselves, but still had a great time.

In addition to the rides there were a number of other entertainment options in the park. We stopped to watch the stage/water show, which was in Danish but entertaining enough to keep the kids, and our, attention. It was a nice break to sit, enjoy one of our pre-packed snack and watch a silly show that included lots of diving stunts. The aquarium is quite fun. Lots of little portholes to peak through at Lego figures placed inside the giant fish tank. Plus there were several tanks where you could pop up in the middle and really see the fish and giant crabs. The kids needed to be lifted to see but loved this and the touch tank area. The penguins were also quite entertaining. The keeper was there feeding them and the exhibit, like the park was totally empty. I would be remiss if I didn’t talk about mini-land. We saved it for the very end of our visit since it is open an hour later than the rest of the park. Miniland at Legoland Billund contains the towns of Europe, and the world is made from Legos with incredible working parts. The kids were amazed by the boats moving through the locks, the airplanes preparing for takeoff and landing and the vehicles moving throughout the towns. Miniature Holland was of course one of my favorite parts with working bridges and windmills. I would highly reccomend that Legoland Billund be part of your Denmark trip, particularly if you can visit when crowds are low, but make it a day trip and pack as much of your own food as you are able. At the very least the bathrooms signs are amusing.