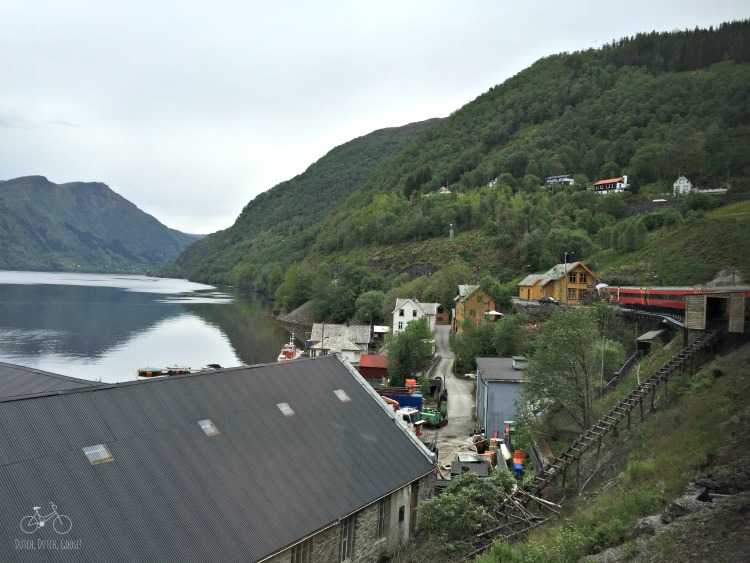 Bergen to Oslo Train with Kids

I first heard about the Bergen Railroad, the train between Bergen to Oslo. on the Rick Steves Podcast. Rick was encouraging a guest to take the Norway in a Nutshell tour that combines part of the rail journey with a boat fjord tour and an incline railway. With some investigation Jeff and I concluded that the Norway in a Nutshell tour was too aggressive to do with the children. Most of the variants of this popular tour ran a full 11 hours. Instead we decided to do a fjord tour in Bergen and on another day take the Bergen Railroad’s full 7-hour journey with our train obsessed kids. The alternative routing from Bergen to Oslo is by airplane, which is more expensive and much less fun.

Even with kids who love trains, 7 daytime hours seemed really intimidating on the train. I could not find a lot of information about the trip online. We were prepared for the worst though and had a lovely trip with stunning views of Norway.

The Bergen train station is small, and as of May 2016, it was completely under construction. We arrived early as we’ve faced long waits and other problems on train trips. This was the opposite. We picked up our tickets at the NSB office and then had to wait for the platform to open.

The train boards 30 min prior to departure. Despite having plenty of seating on the platform you are not allowed to wait on the platform. There is limited seating in the “waiting area” due to construction.

The bathrooms in the station are pay toilets and only take credit cards. We booked ourselves in the Family Car. If you have young kids this is the place to be. Don’t be alarmed that when you Google “family car Bergen Railway” you are treated to reviews by adults who booked themselves in this car. Of course reviews of a loud family car by people without kids are going to be negative. If you are traveling with your younger kids this is where you want to be. The family car has lots of extra space, plus a small play area for kids. The soft play area has a small TV that shows cartoons without any volume.

If you are traveling with your pram, and I’m not talking folding stroller, you need to book a “space reservation” which allows you to book a seat with a spot for the pram right in front of it. There appeared to be four of these spaces available in the family car. We were lucky enough to be able to fit our folding stroller in our aisle when O fell asleep, which kept him out of the way of other passengers. There was plenty of space since our car was not completely full, so we could have parked him away from our seats without an issue.

Each seat has a tray table. There are no large tables in the family car. (Two of the rows turn to make a four person seating group, but the community table is very very small, so it is really not worth it, plus you would need to make sure all four seats were available.) There is a large bathroom with a baby changing table in the family car. The door slides, just an FYI.

H, the four year old, spent the entire time in the soft play area. Two of the boys in the car were also four, one was another American. They became instant friends and spent our seven-hour journey watching movies, playing and coloring. H popped out only to ask for toys or stickers to share with his friends.

O, the two year old, spent most of the time looking out the windows, doing stickers with grandma and sleeping in his stroller. I packed sticker books, paint with water, books, magnetic blocks and dry erase drawing books in addition to the iPad for the trip. We used most of what I brought for O.

The adults enjoyed the ride and the ever-changing views out the windows. There are quite a few tunnels so having something to do like a book, adult coloring or even some work is a good idea.

The train has free wifi, although it’s spotty, particularly when you are high in the mountains. There was enough wifi though for me to text with a friend for most of the journey and post a few pictures and videos on Instagram. There are also power plugs under each seat. Storing luggage is easy. There are large luggage racks at the front of each train compartment for your larger items. There is also luggage storage above each seat which easily accommodated book-bags, small rolling suitcases and duffel bags.

Our train left at noon, which meant we had two meals on the train.

Food on the train is your standard train food. You can find a menu online. The cafe car is a nice place to visit, particularly when the little ones are ready for a break.

If you want to enjoy any beer or wine on the train it has to be done in the cafe car. You are not allowed to bring it back to another car. We packed food that we picked up in Bergen and were the envy of the train car. We had fruit and chips from the supermarket and each picked out a sandwich from a bakery in Bergen before boarding the train.  (We went to Godt Brod since they had done such a great job with our sandwiches for the fjord cruise. They make the sandwiches to order and also have a large selection of pastries. My big mistake was not getting more pastries!) We had enough food to cover everyone for two meals. We supplemented with hot drinks and treats from the cafe car.

Make sure you pack some water with you. The water in the bathrooms of the train is not potable. We brought several large bottles of water as well as filled all our reusable water bottles at the hotel.

This is a truly amazing experience you should not miss if you are visiting Norway. We were able to really see the country. Each new valley felt like a new place we wanted to visit. We wound through several fjord valleys we had seen from our fjord cruise. Even in late May the snow started to cover the landscape as we left Bergen. The train takes you to the top of the world. The highest point on the route (1,222 meters above sea level) is in Finne. The train also crosses over the highest mountain plateau in Europe. Amazingly, the sporadic rain only added to the beauty of the train ride. The red barns dotting the landscape were one of my favorite elements of the ride. The color pops against the often dreary skyline. A woman sitting in our compartment with her baby lives in Bergen and works in Oslo, and prefers to take the 7 hour train trip than the half-hour flight when she goes home to visit! She says the views never get old.