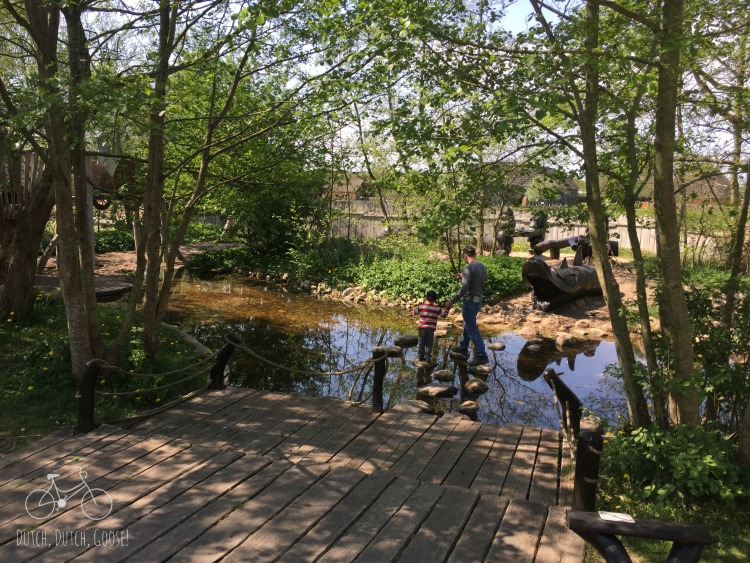 A Day in Ribe & Romo, Denmark

Although we loved our visit to Copenhagen we tend to enjoy small towns a bit more. On our last day in Denmark the only goal was to get from Billund, where Legoland is located, to our hotel in Husum, Germany just over the border.

We opted for a day of driving through the Denmark countryside instead of taking the expressway. We pinpointed two towns: Ribe and Romo.

Ribe is Denmark’s oldest town and was an hour’s drive from Billund. We arrived early in the morning just as this sleepy little town was waking up. There was ample free parking in a town parking lot along a river. We walked around town enjoying the quiet while shop owners were literally opening their shades and setting out chalkboards with daily specials. We popped into one of the churches although O was in a mood so I quickly removed him to play in the garden instead.

The Tourist Information in town is across from the Cathedral and the woman working there offered us several very tempting options for our day. The Wadden Sea Life Center offers several fun interactive tours. There are mud flat tours, where you dawn boots and explore the life that lives between the sea and the land. There is a shorter mud flat tour that is perfect for families, or longer tours and night tours aimed at older kids and adults.  There are also Seal Tours where you are taken by horse carriage or tractor out to see the seals and explore the mud flats. If you opt for one of these tours you will want to be prepared with water and snacks as they all last several hours. Instead we headed to the Ribe Viking Center, a living Viking village. The kids loved this place. There is an activity card you can add to your admission price that includes shooting 5 arrows, working on a wood shaving bench and making a Viking coin. Our kids were too little for two of the three activities, so instead we just paid to make the coin. (Watch H stamp his coin here.) The Viking village has so much for the kids to do and explore. Everyone there was happy to engage the kids. As a result our kids learned a lot about being Vikings. The boys were allowed to help feed and visit with the cows and many other animals. Yep. They had him sit on a cow for a photo. H went to a Viking warrior demonstration. He was too little to participate (min age: 7), but they let him have his own little adventure with dad and all the Viking gear. Little O even got in on the action, although he could barely lift the metal sword he chose. The kids were put to work helping to make the small wooden scraps into “nails” that can be used in construction of the viking houses. They were given large mallets and instructed to hit the wooden pieces through small metal holes until the wood scraps took the right shape. (You can watch H in action here.) The real winner for our kids though was the playground which features a miniature Viking village. The kids loved playing in the different type of houses. There were wooden horses to ride. There was also a “challenge” course of sorts that was made up of Viking god statues. It was too advanced for O, but H loved giving it a try. We ate lunch at the Viking Village, adjacent to the playground, and were pleasantly surprised by the food. (You can view the menu here.)  The best though was the kids Viking meal that our boys split. It came in a small box with a coloring sheet and pencils and contained one chicken leg, two fish cakes, fresh tomatoes and apple slices. Our kids quickly ran back to the playground after lunch. After departing the Viking village we made the 4o-min drive, much of which is over the mudflats, to the island of Romo. The plan was to get in some beach time given the great weather. We arrived at the beach to find that it was miles of packed sand. It was dominated by land sailers and kite flyers. O was asleep so we parked near the dunes, unpacked our blanket and sand toys and had some sandy fun. H and Jeff ran all over the sand chasing balls and digging holes. When the boys tired of the sand we headed to a labyrinth playground. It’s actually right next door to another great playground, but that one was locked. The labyrinth playground is pay to play, but has a dropbox for when it is not staffed. It was filled with several labyrinths of varying difficulty. In the largest labyrinth Jeff and I hung out on one of the platforms letting the kids run all around the maze on their own. This playground also had a variety of other games and puzzles to enjoy. We were of course the only ones there. There was more typical European playground equipment too, like these challenge courses that we see in parks all over the place. The playground had a few non-traditional options too, like this box full of oversized Legos (quite fitting for Denmark). We played for a bit but the kids were getting cranky and hungry from all our earlier fun.

We did an early dinner at Romo’s famous Fish & Chips place on the harbor (Otto & Ani’s Fisk). The restaurant is attached to the fish market which sells the fresh catch of the day. Our visit was a total disaster. We arrived at 4 and the restaurant closes at 4:30. They assured us they were in no rush, but were clearly cleaning the kitchen. The menu was in German and Danish, neither of which we speak well. They offered an English menu which we used to order, but quickly discovered all the numbering was off as none of us received a meal we ordered. When we got our food it was close to 4:30 so we ate the variety of dishes we were served. Everything was good . . . just not what we had planned on. It’s bound to happen! We took a quick peek at the fishing boats in the harbor and the ferry boat unloading before getting everyone back in the car to head to our hotel.

We stayed at the Theodor Storm Hotel, a Best Western property in central Husum, Germany. We stayed on the third floor in a room with plenty of space but only a shower. (There are bathtubs available in some rooms but the hotel was full when we arrived.) The hotel has plenty of off-street, free parking.The breakfast spread was excellent and even included a coffee drink of my choice!

In the morning before departing we walked around Husum. The walk to Husum Castle through the gardens is lovely and easy from the hotel. The castle didn’t open till 10 so we just enjoyed the grounds. There was a playground across the street from the back of the hotel, next to a cemetery but it was the dirtiest playground we have seen in Europe. We also took the boys down to the waterfront. We saw a rainbow and tons of boats much to the pleasure of both boys.