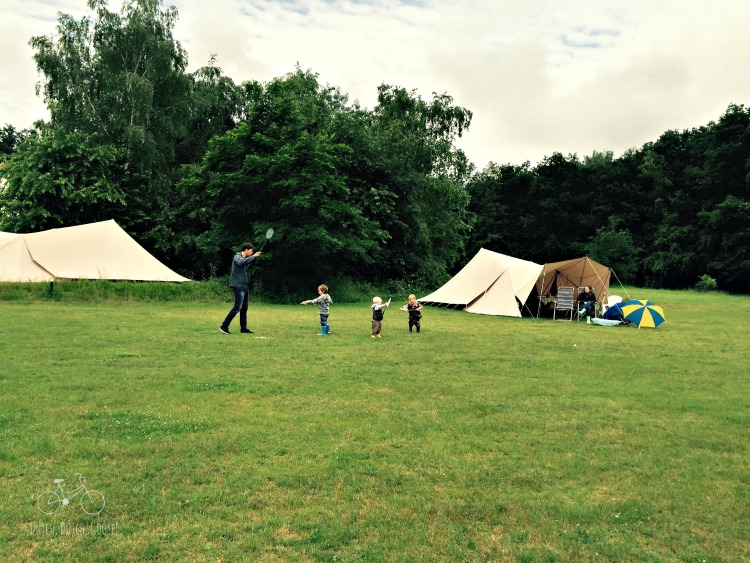 Father’s Day weekend a friend suggested we do some Dutch camping. She knew of a company, Holland Tent, that sets up everything before you get there. With a last minute booking we asked Holland Tent where they had tents available. The company’s last two tents were at Wega Campground in Weert, a small town in Limburg. We booked them!

On Friday afternoon, Jeff, the boys and I headed down by car. Traffic was terrible and our friends taking the train beat us into town! (Yep. In the Netherlands you can take the train to camp!) Checking in was easy, we checked the list and found our tent numbers. The large camping area is organized into circles of tents. It being off season the campground only had a few people camping. There are a few cabins and a teepee available. The tent was all ready to go, fully stocked for our visit. You just have to bring bedding, food and clothing to be ready to go! (Holland Tent has a full list of everything you are provided on their webpage.) No sooner were we all inside the tent when a giant rainstorm blew through the campground. Luckily there is covered seating at the tent, something that saved us as we ate many of our meals in the rain. The kids were endlessly amused by the Holland Tent toy chest in our tent which was stocked with Legos, marbles, badminton and even some board games. The tent had plenty of space for the kids to play. I did bring a few activities for the kids to do in addition to what was provided. The color box scavenger hunt was a big hit. We sent the three little boys out to find as many different colored items as they could. (Directions for this easy project can be found here.)

There are so many activities in the area that we didn’t get to do everything on the list. We were able to easily alternate outdoor activities with indoor activities as the Dutch weather changed. The campground itself has a small playground that our kids loved. It has a water pump and sand to dig in, plus a few swings. There is a ping pong table, but balls have to be purchased from the office that is only open for thirty minutes each morning (10:00-10:30). There is also a recreation room that has wifi and plenty of table space. It also has outlets – which we used to charge phones a few times. There are colored pencils on the table, but you’ll need to bring your own paper. There are also several shelves of books to borrow (only one English book). The campground also has a “critter kit” that can be borrowed from reception. The kit had a big box and bug jars for capturing bugs. We managed to get two frogs, a slug and a snail all in the box. It had an ant farm sucker, but no one was willing to be the one to suck on the one end to draw the ants into the jar. It also had a small, cruelty free, mouse trap that we seeded with peanut butter, placed in the woods and almost instantly got a large field mouse. We obviously released all our finds back into the woods. On our first walk from the campground we followed the marked path all the way around the campground to the petting zoo. We were talking about how the campground should have a bridge over the canal so you could access the path easier. Turns out they do! Over our next two days of exploration we found several log bridges and small paths from behind the tents connecting the campground to the recreation area. You simply scamper into the woods behind any of the outer tent rings using one of the worn paths and follow that to the nearest bridge. The petting zoo turned out to be a favorite. They have pony rides (€5/15min) and plenty of animals to feed. There are walking trails, a fitness trail, a lake, a high ropes course and multiple playgrounds.

We also ventured by car to the indoor activities. You can get to these on the walking trails and the campground rents bikes. We took the car because the storms were blowing through and we didn’t want to get stuck. There is a large indoor/outdoor playground. Jeff took H there while I enjoyed a nap in the tent with little O during a particularly crazy rainstorm. There is also a great public pool. The pool turned out to be our kids’ absolute favorite. There were three main pool rooms. A kids area where the water was warm and shallow. There was a small water slide the little ones could go down and be caught by their parents at the end. (Even the two-year-old was obsessed with this one.) Another cooler pool had activities for older kids like a rope bridge, basketball hoops and large mats to play on. The main pool area had a large water slide that protrudes from the building that both the kids loved riding on our laps. There was also a zero entry wave pool with waves every 15-20 min. Nearby is a fast moving lazy river that made me wish we had inner-tubes with us. Another pool area had a tots splash pool with small slides and water mushrooms. The pool also has a large snack bar.

Just across the street is a cafe, De Sluis, with a playground. We had one dinner there which was stellar. Everyone loved their food, which was plentiful. We went back for some ice cream after swimming on Sunday and let the kids play in the playground for a while. It was a great little find that would be walkable from the campground, but also has ample parking.

The only downside to camping in June in the Netherlands is that it is light out till nearly eleven and the sun is back up around five. With little kids this made our nights short and our kids tired. The tent was cool with the cloud cover but heated quickly in the sun. The tent rental from Holland Tents is three nights. We decided to send Jeff and H back to Delft by train, so they could make it to work and school on Monday. Meanwhile, I stayed behind for a night of solo camping with O. He loved having the whole tent to himself, even if we both ended up sleeping on one mattress! It was the warmest of our nights in the tent, staying warm till after midnight and then plummeting into cold. We cuddled together under the blankets and slept better with the cold air. If you are looking for a fun way to get away from the city, or like us, you’re an expat missing the U.S. camping experience I can highly recommend a weekend with Holland Tent. All of their locations look to be at places like where we stayed, with plenty of activities at or near the camp. It was the perfect way to get away for the weekend and just have some fun in the woods.