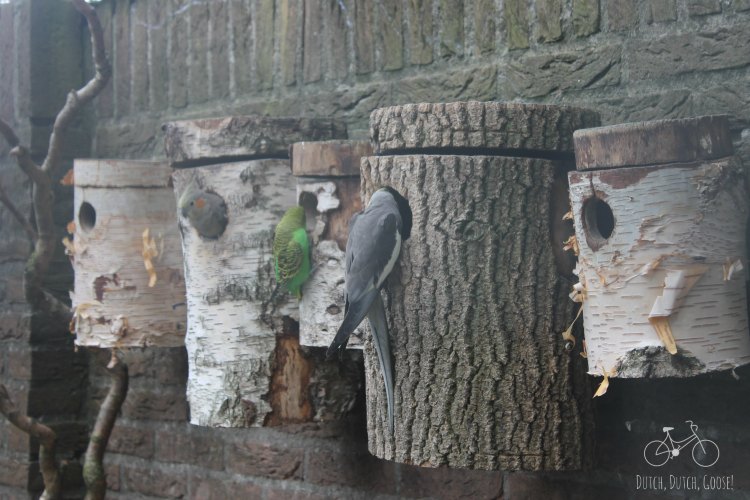 The Vogelpark Avifauna park in Alphen aan de Rijn seemed like a perfect last-minute Sunday outing when the weather unexpectedly cleared up.  Any expectations we had were exceeded! We were honestly not very prepared for the trip. I had the park on my list of “places to take the kids” and we knew that using the Jumbo discount stickers would save us a few Euros on tickets. We packed a lunch and hopped into the car ten minutes after deciding it was a good day to go. The park is not terribly large, but we were glad to have our stroller with us. We also noticed that families were outnumbered by larger adult groups. Vogelpark Avifauna claims to be the first bird park in the world, having opened in May of 1950. The park is owned by the Van Der Valk Group, which is a large hotel and restaurant chain in the Netherlands. Parking is free and ample. You can also easily arrive by bus or bike.

The park features every sort of bird you can imagine. There is a rain forest free-flying area that the kids loved. The birds both scurried past us on the ground and flew just above our heads. There are a variety of Birds of Prey, which are always a big hit with my boys. Plus who doesn’t love penguins and brightly colored tropical birds. We explored about two-thirds of the bird exhibits in our morning (10-1) at the park. The park has a few monkeys that cohabitant with the birds. They were quite active, running across their ropes over and over when we arrived. The park holds bird shows and feedings throughout the day.  We caught the 11:30 bird show and were properly amazed,  despite our limited understanding of the Dutch narration. The culmination of the bird show occurred when the eagles and falcons flew over the lake and caught bait thrown by the keepers into the air. The highlight of the park, however, was the massive play facility. The playground had something for everyone. There was a large rock climbing area with rope bridges, sliding poles and boulders to climb. A giant slide tower had a variety of slides coming from different levels and different sides. One of the big slides was full of rollers. The noise of all the rollers spinning added to the fun The smallest slide on the towers departs from the first floor and was O’s favorite as he could make the climb and slide on his own. There were also several play structures for little ones. This red train was my kids’ favorite, followed by a Jeep mounted on springs allowing you to bounce on it.

For €2 you can buy a wristband that provides unlimited use of all the motorized activities. Our kids could not get enough of these activities. There were cars for the kids to drive, bumper boats, a jumping pillow, a small carousel, diggers and bumper cars. The drive-your-own cars were my kids’ very favorite. They had the track to themselves and just loved driving around and around. These were the same type of cars we had in Berlin, but here O was allowed to ride with Jeff’s assistance.

The bumper boats were a favorite of the kids, but a bit of a mess as our kids were not old enough to drive the boats on their own. There is a small boat track that lacks a current. The older kids had no trouble. We, however, took forever to work our way back to the dock! They even had an entire sandbox of our favorite hydraulic digger toy! Again, both boys were able to enjoy this here with unlimited play included in their wristband. (In Germany these typically cost us €1 for a few minutes of play.) The boys are not tall enough for their legs to sit on the ground and needed some adult assistance to pivot the digger. There is a large arcade full of your typical arcade games. These are coin-operated and not included in the wristband deal.

There are several restaurant options on the property as well, although we packed our own lunch and enjoyed it at one of the many tables at the playground. There is also a Van Der Valk hotel and Grand Cafe just outside the property.

We apparently missed one of the most popular things to do which is to take the Van Der Valk boat out on a Rhine River cruise. The boats leave right from the park, but are a separate fee. (More info here.) We plan to return, even if it is just for a boat trip.