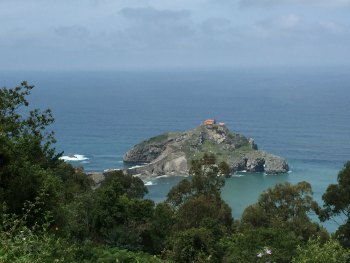 Driving the Basque Coast from San Sebastian to Bilbao

There is much to be explored in Basque Country. We had a lovely plan to see a few coastal towns and hit a few of the highlights on our trip from San Sebastian to Bilbao. Life, however, had other plans.

Almost immediately into our drive H (4 years old) said he didn’t feel well. He would spend most of the day sleeping in the stroller or in the car, meaning that one of us was left behind. Unbeknownst to us we were traveling on a local holiday meaning restaurants and attractions we had researched were on holiday hours. We had plenty of snacks but no real “meal” food and were literally unable to find a place with an open kitchen until 2pm. It was not our best travel day, but we did manage to see a few things along the way. The first stop on our trip was the birthplace and Basilica of St. Ignatius of Loyola in Azpetia, Spain. The visit to the sanctuary is free, but there is a small fee to tour his birthplace, which is adjacent to the church. The tour is not at all stroller friendly, so we parked ours at the entrance desk. The kids actually really enjoyed touring the house. St. Ignatius was a knight before his conversion, so there are many castle type artifacts in addition to the religious artifacts. St. Ignatius was the founder of the Jesuit Order. We should have grabbed something to eat in town because as we pressed on we ran into trouble.  The next stop was supposed to be the Oma painted forest. There were several restaurants in the area so we thought we would grab lunch before pressing on, unfortunately they were all “open” but not serving food until 2pm. H was fast asleep in the back seat and O was close to napping so we pressed on skipping the stop altogether. We stopped at San Juan de Gaztelugatxe, a chapel out on an island connected to the mainland by a stone bridge. There are 200 or so steps required to reach the chapel. The infrastructure here is exactly what we were looking for. They had a restaurant, cafe, small bakery stand, bathrooms, playgrounds and plenty of things to explore. H was still asleep so we took turns hanging out with him in the car while other parts of the group grabbed lunch, checked out the playground and enjoyed the view.

It’s a quick drive from Gaztelugatxe to Bilabo, where we got settled into our AirBnB. Another good stop on a Basque Coastal Drive is Hondarribia. We stopped here on our drive from Lourdes, France as it is on the border between Spain and France. It is an ancient walled town that is just adorable. They have elevators to take you into the walled city center, as there is limited driving inside the walls. We stopped into the TI and were able to enjoy an English subtitled video that told us all about Hondarribia. Hondarribia is a great little town that is worth wandering around in for a bit. We grabbed dinner at a random restaurant that was open, but seriously there are plenty.

Wherever you stop the coast is full of interesting and beautiful towns and landscapes. It’s worth taking the scenic route!