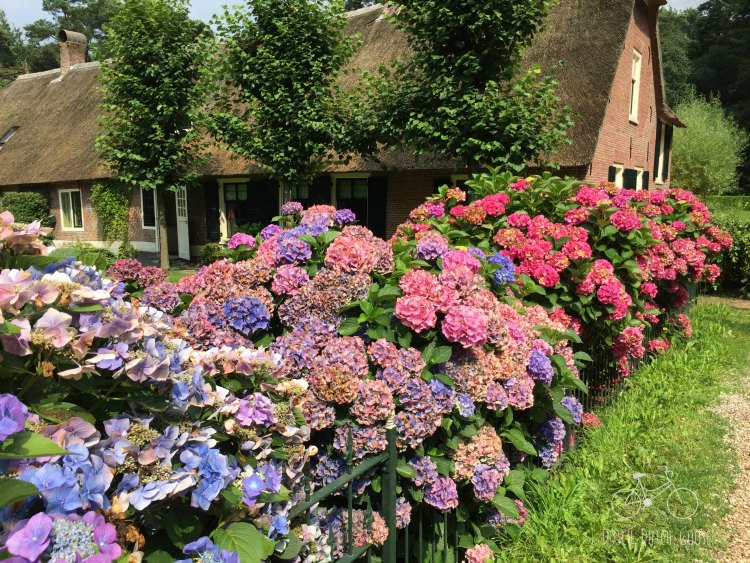 With my belly quickly growing (33 weeks!) we’ve shifted our travel focus for the next few months to a list of in-country attractions. So on Saturday morning when we heard the weather was supposed to be nice we loaded the car and made the hour and a half drive to Arnhem to check out the Open Air Museum.

We hit a bit of traffic entering Arnhem and, unexpectedly, the rain started to pour down. My four-year-old then announced he had to pee. Jeff, having been to Arnhem said that the Airborne Museum was right around the corner. It is indoor, a Museumkaart member and had bathrooms. We popped in and used the bathrooms. The museum is incredibly well done and tells the story of the WWII battle at Arnhem (Operation Market Garden). The museum is completely inappropriate for small children. This would be a great stop for families with kids 8 and older. They even have a special children’s program targeted at that age group. The Open Air Museum is just a bit farther down the road (15 mins), easy to find following the brown signs. The museum has a large paid parking lot. (Your parking token must be purchased at the ticket counter or gift shop before you leave, 6 Euros.) You can also reach the museum by bus from Arnhem Station. The Open Air Museum is part of the Museumkaart program.

The museum has something for everyone visiting regardless of age or time in the Netherlands. The museum was established in 1912. So, for over 100 years, historic buildings from around the country have been moved here and put on display. The signs are all in English and Dutch. The buildings are almost all open to explore, many of them with guides inside to tell you about the building. We popped into an old farm house to learn about the old Dutch way of making linen from flax. The guide even gave H a piece of flax from which to harvest the fiber. She also had plenty of demonstration items for H to touch. Jeff found the working brewery and chatted with the brewmaster for a while. He sampled the beer that was ready and we even purchased a bottle. (Do note that the museum does not take cash so you will need your pin card to make purchases at the small craft stores.) The brewery has both modern day equipment as well as older production equipment. There were hops for the kids to smell, and they could see them being harvested on the vines outside the brewery. Our cheese lover, O, enjoyed the steam powered dairy. We were able to see a steam engine power belts throughout the museum to make cheese and butter. The dairy is still used, so of course we purchased a wheel of cheese to take home with us. I particularly enjoyed some of the old homes from the North Sea area that were moved to the museum. They were built up on hills due to the low lying land and the families subsisted on fishing. The house next door had a demonstration on ship building that was fascinating. There was even a boat you could pull yourself on over the canal to reach the houses. There is of course plenty for the kids to do as well. There was a well appointed playground with your typical amazing Dutch equipment. This one is linked to a large hedge maze. The museum also has a children’s village where kids are encouraged to take on the chores they would have done like laundry, cow milking and horse carting. The “town square” also had a selection of old bicycles (one big wheel, one small wheel), push carts, stilts and rings for the kids to try. If that wasn’t enough you will also find a carousel (€1.20/ride). Our kids were thrilled with the fire engine option with a working bell. As if all of this wasn’t enough the museum has working tram cars that circle the park. There are five stops. We boarded the tram immediately upon entry and took it one stop where we got off to explore. We worked our way back around throughout the day and took a last ride of the full circuit before leaving. As for logistics, if you have little ones a stroller is a necessity. There is a lot of walking and not many spots to sit in the demonstration areas. Our kids were happy to listen and touch things from their stroller seats. The buildings almost all have ramps, so although we had some tight turns in buildings, we were able to bring the stroller everywhere with us. They even have ramps on and off the trolleys. We packed a picnic lunch and picnic blanket. There are plenty of picnic tables (some even covered) to use throughout the park, so the blanket was unnecessary.  There are also several cafes if you would rather get food there. We did stop in the “town bakery” for a treat in the afternoon.

I thought the kids would last an hour or two at the museum. We ended up spending most of the day there (10-4), leaving just an hour before closing.

If you’re a first time Netherlands visitor you can hit all the highlights here – windmill, cheesemaking, wooden shoes, plus so much more. If you are a longtime Netherlands resident I guarantee you will find something new.