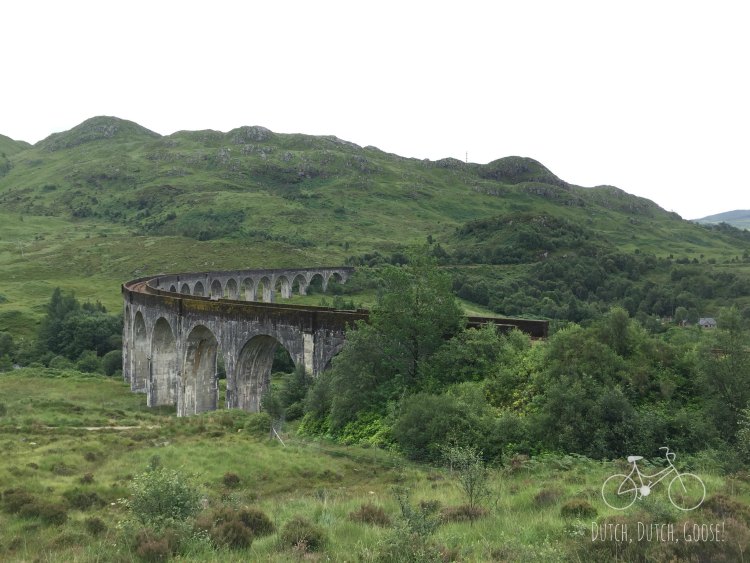 You are going to think we are totally crazy when we tell you that even with our train obsessed kids we bypassed the Jacobite Steam Train. The Jacobite Steam Train, which was featured in the Harry Potter films as the Hogwarts Express runs out of Fort William. The trip is several hours long though and we knew our little ones were just not up to it. It’s hard for them to sit still for that long and we knew we would not properly enjoy the trip. Instead we had big plans to see the Jacobite Steam Train go across the Glenfinnan Viaduct (the really famous bridge from the Harry Potter films.) It’s hard to find information on the Glenfinnan Viaduct Trail, this hiking page was the best we could find. We decided our best plan was to go to the Glenfinnan train station and ask for a train schedule. The station worker, an 18 year old, told us we had 20 min before the train came. We decided to try to make it work but quickly discovered that the path was much too steep for two kids and a pregnant lady to make it to the train on time. Not to mention that it was a muddy mess. I was glad to be sporting the Wellies! Instead, we watched the steam train come through the valley and took our time hiking to the viaduct. The hike provides views of the valley, the viaduct from above and finally brings you back under the viaduct. H was particularly pleased with the view as we are reading some of the Harry Potter books together in the evenings. He hasn’t seen the movies but it was enough to just know that the Hogwarts Express crossed this bridge. Turns out the hike can be done as a loop and if we had started the other way we would have easily made it to see the train, had we been lucky enough to find an open parking spot. Oops. The hike back also took us by an old church – the Church of St. Mary and St. Finnan, commonly called Glenfinnan Church – nestled into the valley, it was worth stopping into. There are a few parking spots in front of this church as well, which could be used to do the viaduct hike. We had a lovely lunch at the Glenfinnan Station in the rail car restaurant. I would recommend this as part of your loop walk. The food and service were excellent. It’s a popular stop though and we ordered the last of the soup of the day. (There is also a hostel here in a rail car that would be perfect for a group.) You get a free ticket for the museum if you eat at the restaurant. Our next stop was Neptune’s Staircase, a series of 8 locks. There is a playground near the parking lot that H enjoyed while O was taking a car nap. We walked up the full set of locks and peeked down the whole set. H got a chance to help the guy running the locks. H closed the gates to let the last boats out for the afternoon. The water was already down so H did not get to see the water drain out, but he still thought it was super cool and we waved the boats off on their journey. Our next stop was the Dunstaffnage Castle and Chapel. This castle provided plenty of room for the kids to run around. The old ruins out front were the perfect place for a game of chase and hill rolling before we calmed down a bit to explore inside. The castle was built in 1240 and is one of Scotland’s oldest stone castles. It remained in use by many parties including the MacDougall clan who made some “modern” improvements to the castle, including the gate house in 1500. There is a small chapel in the woods that was quiet during our visit as many visitors bypass it completely. The boys though were most taken by the rocky beach that is nestled behind the castle. We explored rock pools and threw rocks until the castle and park grounds were near closing. The lake was calm but the tide was coming in. We found so many creatures crawling under the larger rocks and in the surrounding tide pools. We pressed on out of town to Oban where we would be spending the night. Oban is a cute little town with plenty going on. We stayed at the Alderlea House, which had an attic room with a double bed and two single beds giving us plenty of space to spread out. Parking is also available in the evenings at a lot next door (free after 6pm). Breakfast was cooked to order in a dining room in the basement. It’s a dark, awkward space but the food was good.

We ate dinner in Oban at the Oban Bay Fish & Chips Shop. The food was fine but the place was so incredibly kid friendly, which is what we needed because our kids were hyper! I did order a milkshake and had high hopes only to be disappointed. It was nearly as thin as milk!

Oban has a chocolate shop I really wanted to check out, but it was closed when we arrived and we knew we would be departing before it opened the next day. Our tour book listed hours for the shop that were incorrect. We should have checked the shop’s website first!

We just wanted to make sure you knew that VisitScotland provided us with an ASVA attractions pass during our visit. All opinions are our own.