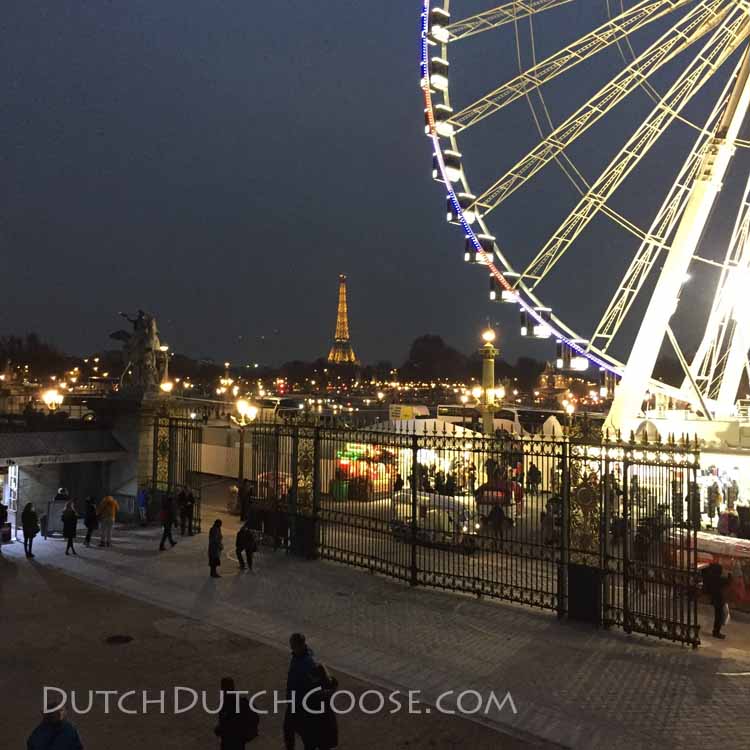 A Girls Weekend (Plus Baby) In Paris

This past weekend I got to experience one of my “living in Europe dreams.” On Friday afternoon, after a full week of crazy kids, I packed up a small bag, grabbed the baby and met my girlfriend at the train station.

We boarded the Thalys for a girls weekend in Paris. The goal was to enjoy Pairs sans kids – our itinerary included wine, art and shopping. The Thalys high speed train takes just over three hours to shoot from Rotterdam to Paris. (We also enjoy taking the Thalys with the kids as there is plenty of space for activities on the train, bathrooms and lots for the kids to watch.) Our train was delayed nearly 30 min due to a suspicious package found in the Paris Nord station. We spent the time shopping at a few of the stores in the Rotterdam Central station. On board we enjoyed some champagne we had brought along and uninterrupted conversation. There is a bar onboard where you can purchase drinks and snacks. There is also Wireless Internet, which was even better and more reliable than on my last trip. My little guy slept for most of the ride. The train has baby changing stations in a few of the bathrooms onboard. They are well marked, although they can be a few cars away from your seat.

When we arrived in Paris Nord the queue for the Paris Metro tickets was long. The machines take a while, and choices are not always clear. We purchased a 10-pack of cards, so we wouldn’t have to wait in another line or worry about it again. I used the Google Maps transportation option to find the route to our hotel. We opted to take the RER one stop to our hotel. When taking the RER inside zone 1 only a regular metro ticket is required. We stayed at the Paris Opera Hilton, which was incredible. My girlfriend’s husband travels for work. He was able to hook us up with an amazing room that included breakfast. The room was huge for Paris standards, had an amazing bathroom and plenty of space to put the travel basinet.

We emerged from the Saint Lazare Train Station and pulled out our phones for directions to the hotel, only to find we were literally standing at the entrance. The hotel is perfectly located in the center of everything. We were walking distance from everything we wanted to do all weekend.

We had dinner at Le Carre, just a few blocks from the hotel. I made reservations on Open Table and we were seated right away. We were seated in the bar area, which was odd. I’m sure we could have asked to move, but honestly we were just hungry. The food was delicious. My friend ordered a steak and I had lobster ravioli, which oddly came with a side of rice. We also split a chocolate ball for desert. This was one of those magic deserts that is melted by the heat of the sauce to reveal a delicious creamy interior swimming in a chocolate cream sauce.

The next morning after breakfast at the hotel, we grabbed a Starbucks (in the hotel building, but also on every block) to keep us warm while we explored the city. Minutes into our walk we found ourselves at the enchanted Christmas windows of two of Paris’ largest department stores – Printemps and Galeries Lafayette.

We wandered the windows taking it all in. We were surrounded by languages from every corner of the world, marveling at the store windows. The polar bear windows were my favorite. These bears were making quite a mess of things, and were made entirely from folded paper. The windows are truly amazing. I venture a guess that you can only see the likes of them in New York, London and Paris. We awed at the fact that you can literally come to Paris every year for Christmas and see new fantastical window displays. Finally, lured by the idea of more Christmas decorations we popped into a store. Inside the Galeries Lafayette we found ourselves continuously distracted by something or the other. We worked our way through the store until it opened up into a gratuitous atrium Below us the traditional cosmetic and accessories stalls were covered in lights. It looked like a small town under the large hanging tree. After fully appreciating the decorations, which moved and included a Ferris Wheel, ski lifts and aerial trams full of winter animals, we headed up the escalators. Behind the grand dome the children’s department and toy store fill the floor. A Santa with red hipster glasses and furry robe sat greeting children. My little guy was too cozy to wake to meet Santa, although I may regret not seizing the opportunity to have his first picture with Santa. The toy department and clothing department were impeccably laid out. Make your way to the windows in the very back for a view of Sacre Coeur.

The department store is truly a time suck. Even a non-shopper, such as myself, can get sucked in for hours. When we glanced at our watches we were horrified to realize that more than half the day had slipped away. We averted our eyes and dashed for the nearest exit. On our walk we paused briefly in front of The Louvre for pictures. We’ve both been to the museum previously and found it overwhelming. Instead we opted to spend our time in a smaller but equally impressive museum. Ah, The Orsay. We pre-purchased tickets through the museum itself, which allowed us to walk right in. We processed through security, checked our coats and entered the museum. The Orsay is incredibly baby friendly. There are two large baby changing areas and even a breastfeeding room. I chose to feed my little guy in one of the galleries, after finding a guard sleeping in the breastfeeding room. I alerted someone who rectified the situation, but I just felt better being out in the gallery, and no one seemed to mind.

I had downloaded the Rick Steves audio tour (free) but ended up not using it, opting instead to just explore. Even with a map we were unable to find anything we were specifically looking for. my traveling companion is an artist so it was amazing to hear her explain technique and composition as we wandered. We were a bit disappointed to be unable to find the famous impressionist paintings. We realized we hadn’t eaten lunch and the museum boasts several restaurants. We opted for the one on the top floor. We waited in a small line and were quickly seated. (A lovely couple allowed us to line cut as the baby clearly needed to be out of the carrier.) Lunch (at 3pm!) was excellent. A selection of sandwiches, quiches, salads and of course wine. I had the chicken caesar salad and my friend had a chicken pot pie of sorts. We enjoyed a Rose and while sitting there noticed the Impressionist Gallery tucked into the back. Every painting in this collection is recognizable. We spent over an hour enjoying these paintings. It is truly incredible to be able to see these paintings in person. The galleries were crowded but not such that you couldn’t enjoy yourself. I never felt rushed. I could have brought out the audio tour, but really enjoyed just wandering and looking.

At the end of the exhibit is a lovely little gift shop. Much less overwhelming than the large one on the first floor. I found several great books for the kids there in English about Impressionism and Paris. We scooted out the door into twilight Paris and followed the crowd toward the Tuileries Garden. This walk is stunning any time of day but was particularly stunning in the evening with all the Christmas lights. We just kept stopping as the view got better and better. Our ultimate goal was to make it to the Christmas Market on the Champs-Elysees. We nearly died crossing the massive traffic circle into the market, despite there being crowds everywhere. The cars didn’t stop. The people didn’t stop. It was dark. Yikes! Despite reading reviews on how amazing this Christmas Market was, I found it disappointing. It was incredibly crowded. It was hard to stop and shop, or even look, as you were caught up in the movement of the crowd. The shops that we found were all selling Chinese-made goods. After about 50 booths, we started to see all the same items again. There were a few gems tucked in there though.

We were tired and didn’t make it to the end. Once our disappointment set in, and knowing we were headed to the German Christmas markets the following weekend, we bailed and headed back to the hotel.

After a little rest we popped over to Lazare, without reservations, for dinner. Lazare is located in the shopping area of the Gare Saint-Lazare, giving it a bit of a casual atmosphere. The menu is simple but delicious. The next morning we had a half day before we needed to catch our train back to the Netherlands. We spent this time Christmas shopping in earnest. Although most small boutiques are closed on Sundays, the larger department stores and shopping areas are open. I found a few new favorites, including “the H&M of Japan” UNIQLO. I bought a new coat and enough other little things that I needed to expand my bag on the way home. The great thing about the train though is you don’t have to worry about your luggage weight. We will (hopefully) be back soon!