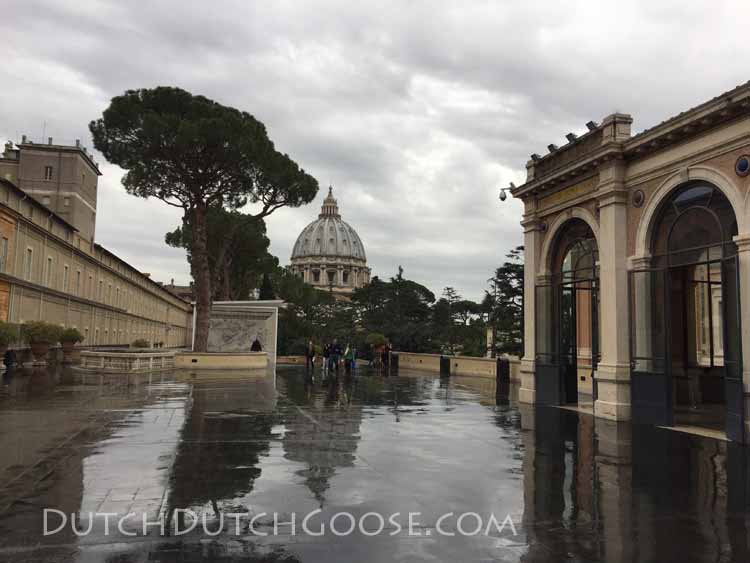 We arrived as early as we could with timed tickets. On our particular day that was 10am instead of the more typical 9am. We were bumped to the handicapped line, giving us quicker entry, because we had little children with us.

The kids were well fed and hydrated when we got to the Vatican. We let them snack in our line outside so there were no issues or snack requests while inside the museum. There is a cafe and pizzeria but outside food and drinks were not permitted.

We bypassed the guided tours and audio tours opting instead to let the kids set the pace and path. Sure, we likely walked past lots of “famous” art, but we got to see what the kids were interested in. We did pre-purchase timed tickets which helped us “skip the line.” Jeff had to take the barcoded ticket on his phone to a desk, once inside, to get paper tickets. It was easy and only took a few minutes. Once you reach the top of the ramp, head out onto the terrace for beautiful views of Saint Peter’s. We also found lots of little details we watched other people walk right by, like this reflection of St. Peter’s in the glass H spotted. Or, the tile birds on the floor grabbed the boys’ attention and sent them on a hunt for other animals they might be able to find. Or the domed ceiling that the boys insisted looked like a giant eyeball watching us. . .haha. (My silly boys!) We brought a stroller that the two oldest rotated in and out of. This gave us flexibility. We were able to use the stroller to restrain the bolting 2 year old for a bit and also as a chance for both boys to rest their legs. Our newborn spent the whole visit happily in the Ergo. I had no trouble finding places to nurse him when I needed to. We had to carry the stroller up (and down) several flights of stairs. Despite this it was nice to have it with us. The guards pointed us towards elevators whenever they were available. Jeff was able to bring the boys down to his favorite area of the Vatican, this hallway full of Roman statues. We found large open space in front of tour groups. Guided tours act as bottlenecks. We often found going just ahead of one or just behind one gave the kids ample space to explore a bit on their own. Our middle little spent a lot of time looking out windows and enjoying the maps. He also had a few of his meltdowns where he throws himself on the floor and lays there quietly. Luckily the Italians love children and happily stepped around him while giving him encouragement to get up. We even found 10min to ourselves, in a room full of Mattise paintings and benches for a much needed sit down. I didn’t even know one of my favorite pieces of art was in the Vatican. I loved spending a few minutes with it in person.

Even wth tired kids they were in awe at the Sistine Chapel. Some things just translate to kids, even when kids can’t comprehend it in totality. Grandpa and Henry played a fun game to mimic Adam and God touching fingers.

After the Sistine Chapel you wind around a bit till you’re spit out where you started with that lovely view of St. Peter’s Basilica. I found the visit to be completely overwhelming. I think it’s hard to appreciate the grandiosity of what you’re seeing when everything around you is stunning. I was over saturated and will likely be absorbing and processing the incredible works for days. (I have had similar reactions at the Louvre and the MET.)

One thing we missed and need to figure out how to see on our next visit is the Papal Carriages Museum. Our kids are very much into transportation methods and would likely be quite interested in the Pope’s methods of transport across the ages. The Vatican also offers a 2 hour Vatican Garden Tour, that looks like something I would enjoy, but not with the children. Whatever you do, make sure you take some time to peer out the windows, or you will miss some stunning views of Rome! The route out of the Vatican Museum takes you down a ramp not suitable for strollers. Instead we boarded an old elevator, complete with benches and an elevator operator. (This was the highlight for my four year old! A guy, wearing a uniform, whose job it is to push buttons!)

Just a few blocks from the Vatican is a wonderful pizza by the kilo place, Bonci Pizza. We snagged the bench out front to enjoy our pizza and wine! Yummy. Lonely Planet named this some of the best pizza in the city and we couldn’t agree more. Don’t leave without trying one of their fried rice and potato balls. They are delicious. If the bench isn’t open there are plenty of tables for standing and enjoying your food.