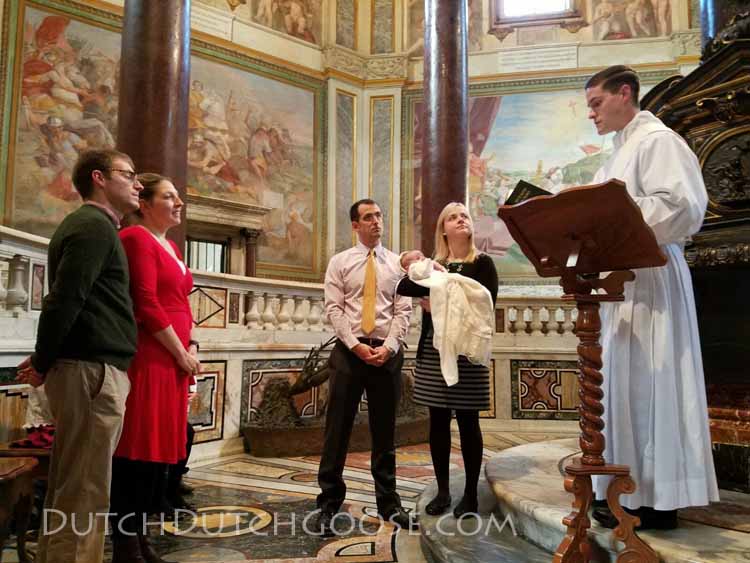 Being an expat means being far away from family and friends. Although this poses challenges, it also provides an opportunity for amazing experiences. When the newest little joined the family we struggled over what to do for his Baptism.

The two other boys were Baptized at my home parish, the Cathedral of Christ the King in Atlanta, GA. This also happens to be where Jeff and I got married and I went to grade school. Flying back to Atlanta was not an option this time around.

Local options were also difficult. The Netherlands is rather secular. Although our kids attend a Catholic school here, it is not attached to a Parish in the same way we are used to in the States. Finding a priest willing to perform the Baptism in English was also proving to be a problem.

Knowing we were headed to Italy for Christmas I casually suggested to Jeff that we might find someone to Baptize our new little one while we were there. Jeff and I started contacting anyone we knew who might have a connection to an English speaking priest in Rome.

Next thing we knew our middle-little’s Godfather had hooked us up with a friend of a friend in Seminary in Rome. As luck would have it, he was going to be a Deacon by the time we were planning our trip and was willing to host the Baptism. The next challenge was finding a church. The Deacon said he had some leads and the next thing we knew he had arranged for our little guy to be Baptized at the world’s oldest baptistry and highest church in Rome – the baptistry of the Archbasilica of Saint John Lateran. The church is absolutely amazing. It is the oldest church in the West and the seat of the Pope, making it the Archbasilica. Our middle little loved taking in all the open space of the basilica. Statues of the Apostles line the walls, tucked into niches. The statues are larger than life and command the space. Even the floor is beautiful and intricate. We were reasonably certain, as the plans formed, that we would be the only ones in attendance. It seemed unreasonable to ask the Godparents to fly across the Atlantic. That’s ok we thought, it can be a small family affair.

Our party soon grew by two as my parents made plans to join us for Christmas including our stint in Rome. We could not believe our luck when the Godmother informed us that although her husband wouldn’t be able to travel she and her mother (my son’s great-godmother) would be joining us. Our party had grown again.

Then our child’s Godfather called Jeff to tell him that he and his wife and three kids would be coming over as well. They would be celebrating 10 years of marriage and wanted to bring their kids to Europe. Now we were 15 people strong. Chatting with an old friend from our days in California who was now living in Rome, I mentioned that we would love to have her join us for the Baptism, but also understood if she didn’t want to spend her day at my kid’s Baptism. Wouldn’t you know it, she lives a few blocks away from St. John Lateran and said she would love to meet up with us. She and her three children joined our group. Lunch was held at Ristorante Orazio. It was delicious and the perfect place to celebrate the sacrament. There is even a grass lawn in the back on which the kids ran around and enjoyed. At lunch, I looked around at the 19 faces who had turned my far away expat Baptism into a community event. Sometimes our crazy plans don’t work out, but when they do they certainly are special.

I also highly encourage you to check out St. John Lateran on your next trip to Rome. It is just as beautiful but much quieter then St. Peter’s Basilica.