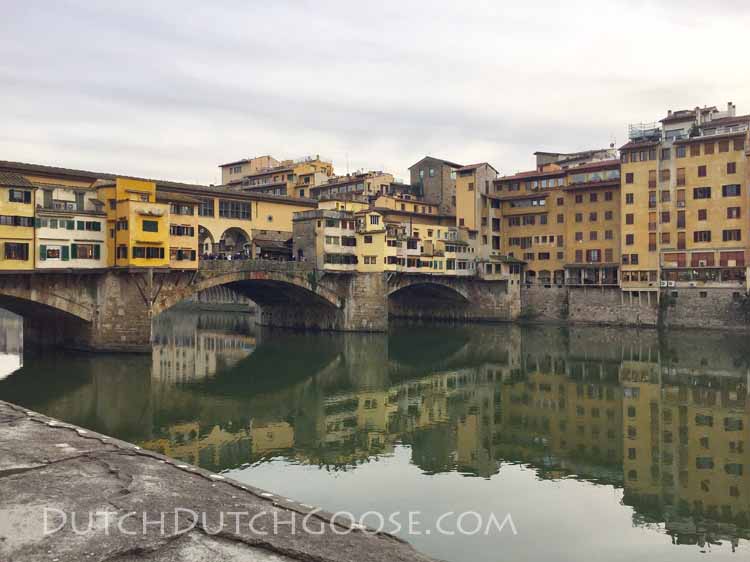 Although we stayed in a villa outside of Florence we ventured into the city on Christmas Eve and Christmas to enjoy all the city has to offer.

We opted to take the train into Florence. Certain roads in Florence require a special pass to drive on. The maps are confusing and the fines are high (90€). It was easier to park for free at the train station and take a 20 min ride into the central station. Although Florence is a large city it is really walkable. The Dome of Florence Cathedral (Duomo) looms large and is constantly spotted peeking between the buildings as you explore the city. We popped into ICY DOT WINE for a morning treat. This place looks like a great snack stop any time of day.

The Cathedral is so large, and its outlying buildings extend into the square so it’s honestly quite hard to take in all at once. We ventured inside, which is free. The kids loved saying a prayer and lighting a candle together. Other than that there is not much to see. There is a museum in the basement, which is included as part of the ticket that allows you to climb the tower and view the baptistry. We did not try these out, but information on these tickets can be found here. There was a beautiful nativity outside of the Florence Duomo. There were tons of people hanging around in the plaza enjoying all the decorations in the beautiful weather. We continued our walk through the city finally finding our way to the Galleria dell’Accademia. Everything online says to get your tickets ahead of time. We had not done that and somehow walked right in. Our friends who tried to visit later in the week were not so lucky and encountered a two-hour wait. So, book those tickets before you go! The museum is small and known for the David statue. It makes it the perfect place to visit with the kids. The museum is perfectly digestible for little ones. There was an exhibit on musical instruments, including some computers that had interactive programming that played music. There was also a room full of tapestries and paintings of Jesus and Mary, which were easily understood by our kids. Of course David is the highlight and the building is built to highlight this amazing statue. I was amazed by the enormity of David. The kids were really quite captivated too. We did have our typical meltdown from the middle little when it was time to leave. (Perhaps he really loves museums…) A room full of plaster models was our oldest kid’s favorite exhibit. He loved seeing the different hair styles and how the molds were made. I found the mold making fascinating. The molds all have nails run through them so the artists could measure the distance between the points and translate that to their final work. We headed to the Piazza del Signoria so the kids could run around a bit. They also took a few rides on the Carousel with their grandparents. Then we walked two blocks to I due Fratellini for some amazing sandwiches. There are no seats, it’s an eat while standing on the street sort of place, but it’s amazing. The kids were amused by the birds that moved in on our crumbs. We bypassed a visit to the Uffizi Gallery deciding it was too much for the kids. My parents had gone to the gallery on a previous visit to Florence. They say it’s the sort of place you can meander and enjoy all day. We did walk down Piazzale de Uffizi, which goes through the middle of the museum and lets you see some of the outside statues. Emerging from this street you have a stunning view of Ponte Vecchio. The current bridge dates from 1345, but sits close to its early Roman crossing. The bridge was not destroyed in WWII, instead the Germans destroyed the medieval buildings on both sides so it was impassable. In 1966 it survived a flood that overtook the bridge and the surrounding area. It’s lovely to view and you can walk over it to admire all the little shops. There is a gelato store on the Duomo side, Gelateria La Carraia, where we stopped to pick up treats for the kids. They were so kind as my middle little chose coffee ice cream but continued to call it chocolate over and over confusing everyone. They let him taste both and low and behold, he chose coffee. We headed back to the train station and went home for some Christmas Eve pizza making at our villa. On Christmas we once again took the train into Florence. This time we walked directly from the station to church. Jeff had contacted the Parish of Santi Apostoli to find out about mass in English and the priest had responded almost immediately. When we showed up, nearly a half hour early, he knew exactly who we were. He said he likes to respond quickly to people because if he doesn’t they tend to make other plans and don’t go to church. The church is lovely and had this great little nativity that captivated the children before Mass. With many of the “regulars” from the English service traveling themselves, Father asked our group to help out. My parents did the readings and the other family traveling with us, who have much better behaved children than ours, brought up the gifts. Here is our group of 13 (my sister is taking the picture) with the priest. We had a bit of a gap between church and lunch so we found a park bench and Jeff entertained the kids with his jokes. A few stores around the square were open despite it being Christmas Day! One of the Florence Christmas traditions is a big lunch out on Christmas day. It’s so popular that reservations are required. Jeff did quite a bit of research and made reservations at one of the best places in town, Ristorante La Giostra. The atmosphere and food were amazing. We were surrounded by large Italian families dining together. Every dish that came out was amazing.

The service however left something to be desired. We ordered with the owner himself. As each course came out my food was left behind. It seemed like my order was never put in. Jeff went to speak with the owner when my second course failed to come out and he shrugged it off as a holiday staffing problem. Honestly, it soured the experience. At the end of the meal, which lasted nearly two hours,  I was left hurrying to finish my dishes, which were admittedly delicious, so we could get out of there before the kids melted down.

We walked back to the train station to have a relaxing rest of the day at the villa. Florence turned out to be the perfect place to celebrate Christmas. Often when we are traveling Christmas ends up being a wasted day, but between church, lunch and some window shopping we all felt like we had a lovely day out.