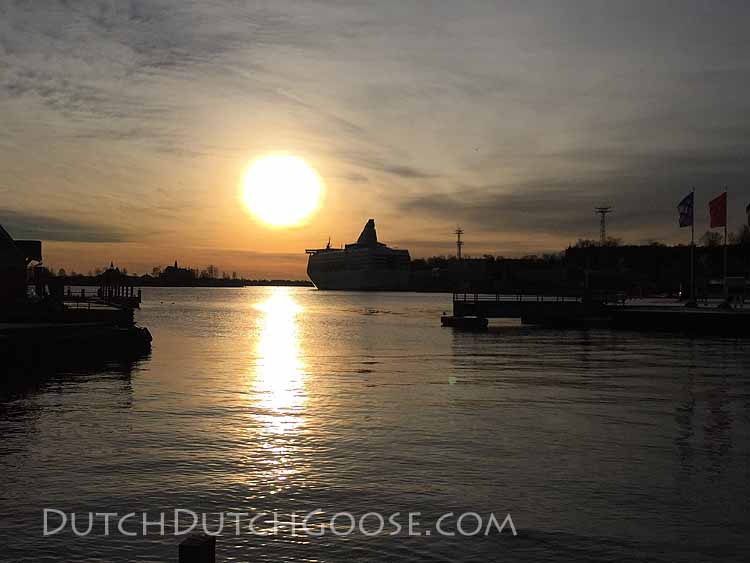 A Day in Helsinki, Finland with Kids

Helsinki is one of the loveliest cities we’ve had the pleasure to visit. It was incredibly clean and had a trendy feel. Looks aren’t everything though. While Tallinn offered loads to do with the kids, Helsinki had far fewer offerings. A day trip here with kids is enough to cover the basics in the winter months. We’d stay longer in warmer weather. We arrived from Tallinn by ferry and took a cab directly to our hotel. Hotel Finn was billed as a trendy low-key hotel. Perfect, since we literally just needed a place to crash for the night. It is certainly in a trendy area. We arrived and found the building under massive construction. The lobby is on the sixth floor of the building and you must be buzzed into the building itself if you arrive late. There is a small elevator. The room was standard but the bed was quite comfy.

The next morning when we wanted to store our bags the staff was helpful-ish. When Jeff went back to get the bags in the evening the staff couldn’t remember where they were put. They were eventually retrieved, but I likely would have had a heart attack if I had been the one waiting for the staff to find the bags. Jeff reported that he had to look in four different spots before the bags were found. We started our morning with a walk around the city. It was bitterly cold and at 10am the sun was just rising over the water. The main park in the center of the city was still beautifully decorated. Everything is quite clean and despite the frigid weather, everyone seemed to be out and about. We walked up past the harbor to view the Uspenski Orthodox Cathedral. It’s quite a sight standing up on a hill above the city. We never made it inside the church, because we came across a small playground behind it teeming with children in snow suits. Our kids couldn’t wait to join in the fun. They dug up ice with the sand toys and ran around the playground with all the other kids. It was really funny to watch. We headed directly to the Helsinki City Museum, which is basically a hands-on city museum. We weren’t the only family waiting at the gate when it opened at 10am. It’s clearly the place to go on a weekend when it’s cold. Each room has a different theme with plenty of things to touch and do. The favorite for our kids was the theater. Puppets, costumes and working stage curtains provided endless possibilities. We only left when everyone got hungry. The plan was to grab something at the little cafe in the city museum but since it was a weekend the menu was quite limited. Instead we just walked a block to Kappeli, the glass cafe sitting in the central park. It was crowded but we found seats and enjoyed some of the traditional salmon stew and sandwiches in the cafe. There is a more formal restaurant but it was above our childrens’ ability to behave at that point in the day. We hopped on a tram just outside of the restaurant and headed out to the Rock Church. The tram ride out to the church gives you a view of quite a few of the other sights. We rolled by the Chapel of Silence and the Ateneum Art Museum.

The middle and little littles fell asleep on the ride over. We paid the admission to go inside the church. I sat down with the sleepers while Jeff headed outside to climb on the church with our big little. You can walk on the roof of the rock church and play on the boulders that make up its walls. It was quite slick due to the ice, but the big boys had a nice time exploring. When I joined them they had found another great playground behind this church as well. The summer water play area moonlights as a tiny skating rink in the winter. Everyone was hungry so back into town we went via the tram. We popped into the Old Market Hall. We arrived with only an hour to spare before it closed for the day. We browsed each of the stalls and finally all decided on a treat to get us through the afternoon. There are a bunch of actual restaurants as well, so it is a great lunch option if you are in the area. The sun was on its way down and we still had a few hours to kill before our 7pm train north. The kids were begging us to go back to the city museum. We agreed, taking a scenic route there through the main shopping street and passing by the Helsinki Cathedral.

We stayed at the city museum until they made the closing announcement. Then we joined the lines of families to use the loos and bundle back up.

We ended up at Putte’s Bar and Pizza for dinner, which was perfect. The pizza was great and the atmosphere is casual. The service was fast but we were never rushed. It was crowded and clearly a family favorite, as there were children everywhere. It was right across from our hotel making it easy to pick up the bags when we finished dinner.

We walked the few blocks to the Helsinki Train Station with our bags to catch the Santa Claus Express Night Train. After our adventure up north in Lapland, we took the night train back to Helsinki for our flight home. We arrived back in Helsinki around 9am. We stored our bags in the lockers at the train station. We easily fit all our stuff into one locker. We walked a few blocks to the Karl Fazer Cafe. They offer a buffet breakfast, which you can share with your children for free and includes their famous cakes. Jeff did that and shared with the kids. I picked out a pastry and coffee, for basically the same price!

We retrieved our bags from the lockers and boarded the train to the airport. These trains leave from Tracks 1 and 2, which are oddly stuck behind the train station, making them the most difficult to find. Ask a local, they are happy to point the way. The airport is quite spread out but kid friendly. We were directed to a kids security lane, which was occupied by adults. They were great with the kids and even had little seats to set the little little in while I was getting my shoes back on. You can find a map of all the kid friendly services in the Helsinki airport here. There are a few play spaces in the airport. We checked out two of them. They are not the best we’ve ever seen nor are they as good as the Tallinn Airport’s kid area, but they were better than nothing. The one behind the glass wall even had a children’s toilet and a large food preparation area. There are also free strollers to use in the Helsinki airport. They were fun and quite handy. Even though we were traveling with our stroller we grabbed one to check it out.

All in all, I’m glad we went to Helsinki but really view it as a gateway to the rest of Finland, rather than a destination in and of itself.

This blog is linked up with: