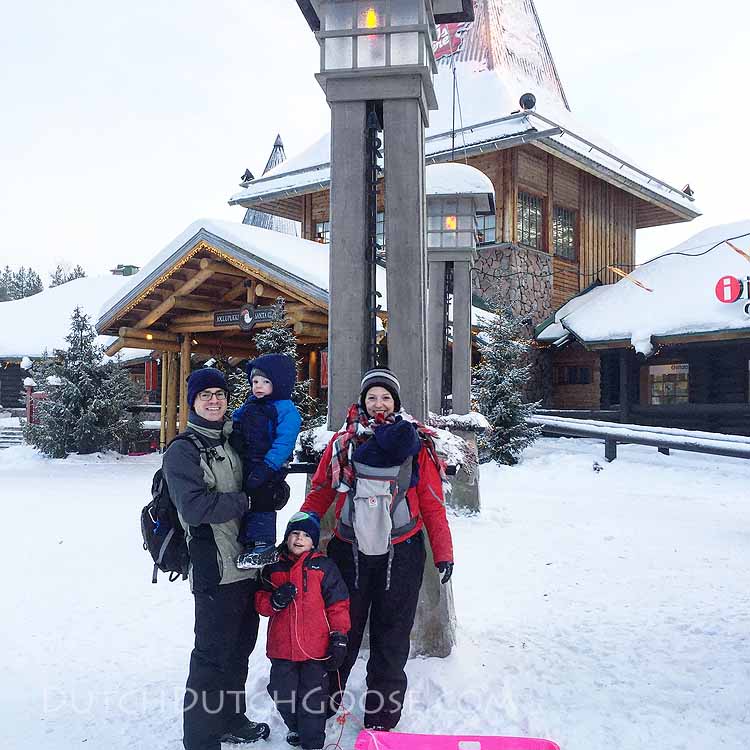 We spent one of our days in Finland exploring Santa Claus Village.  There is easily a full day of adventures here particularly if you book all your outside activities out of this location.

Santa Claus Village is easily accessible from Rovaniemi by bus (#8). The bus is slow and makes lots of stops, but it was easy enough. Alternatively we could have caught a more expensive but faster cab from the hotel. We brought one of the hotel sleds along with us. This was a perfect way to get the kids around Santa Claus Village. The complex is rather large. We headed right in to see Santa. The line can be long throughout the year, so it’s best to go early. It is not hard to find with the giant “Santa Is Here” sign on the roof of the building. You wind through Santa’s workshop. Everything feels very Disney-esque. The kids were completely enchanted. One family at a time is allowed in to see the big guy. You cannot use your own camera so expect to pay for the photos. There is no obligation to purchase but the package was 40€. We also got a cute little video of the whole visit. (Which you can watch here.) Living in the Netherlands, Santa can be hard to find, so I was so over the moon at the kids getting a proper visit. Although they don’t look thrilled in the photo, they were excited (or at least interested) in meeting Santa. They talked about it the whole rest of the trip. Just outside Santa’s office you can straddle the Arctic Circle line. (The Arctic Circle actually moves about 46 feet North each year due to the earth’s oscillation… so walk around a bit!) The kids were less impressed by the Arctic Circle line, but were over the moon with the large pile of snow they could climb and play on. They had been waiting the whole trip for snow to make snow angels and snow balls, and the plethora of snow at Santa’s Village did not disappoint. The snow hill surpassed any hopes they had and they spent loads of time running up it and sliding down with the other children. The boys also loved this enormous snowman. They kept trying to add more snow to it to make it larger! Santa’s Village has a lovely little playground that the kids enjoyed in the snow. They actually had a crew out sweeping the snow off the playground when we were there. The kids thought the whole thing was great. There are plenty of silly little cut outs to pose with all around the village. This one of three Santas on the playground was the boys’ favorite. This one was outside the post office, plus I had to get in on the fun! There are a variety of activities that you can do and book right at the village from dog sledding to snowmobile rides. (A full list of what is available at the village is available here.) We had pre-booked all of ours in town before we went on our trip, but you could feasibly spend one day at Santa’s Village and go nowhere else in Lapland. Santa Claus Reindeer invited us to come visit their Santa’s Village location. We went on safari with them the evening before, but wanted to check out their more accessible daytime location. At Santa Claus Village they offer a 400m or 1000m ride in a reindeer sled through the forest. Opting for the longer ride is truly worth it. The 400m ride runs along a track close to the village while the longer 1000m ride gets you into the forest. (You can watch a video of our sled ride here.) We had a blanket of freshly fallen snow and the forest was just beautiful. The sleds and reindeer are incredibly quiet. You’ll be covered in reindeer fur, which we found so cozy. I was even able to feed the little little on our ride without trouble. The guides were happy to take our picture and let us pet the reindeer. It’s a lovely experience. (The nighttime reindeer safari was the best excursion of the trip, so if that is not an option try to make time for this lovely taste.) When you get hungry head to the tepee-looking building just to the right of the Post Office. This is Santa’s Salmon Place, and it is amazing. We asked three different Santa’s Village employees where to find Santa’s Salmon Place and nobody could tell us. So heed this advice: look for the tepee. Inside it’s warm, with a few long tables and benches arranged around the fire cooking everything. It’s pleasant inside, but you won’t want to take all your winter gear off. There was plenty of room alongside the back wall of the hut for our stroller. The restaurant is small, so check it out earlier rather than later. The menu is simple. Salmon, potato salad and fried cheese served with cloudberry jam. We of course ordered a few of each to split between the four of us. We also had a glass or two of the festive and warm berry juice, glogi. It was so good. There were quite a few people in there asking for their salmon to be cooked a different way or served with different sides, and they are not really able to accommodate that. The salmon is cooked over the fire in the center of the building, and every piece that arrived at our table was incredible. We, of course, had to drop by the post office. Here Santa’s Elves are hard at work year round sending and receiving letters. Approximately a third of all letters to Santa are replied to in writing. This can be more than 200,000 letters annually. There are several large tables in the back where you can write out your post cards. We pre-purchased ours in town. Santa’s Post Office has some, but the selection is a bit strange and pricey. We sat down and wrote out our cards to be mailed. Every piece of mail mailed from the post office features this special cancellation postmark. You have two choices when mailing your cards. You can place them in the orange box which gets mailed out immediately. Alternatively, you can mail them from the red box, which is postmarked and mailed around Christmas. There is also an option that can be completed online and gets you a letter from Santa, mailed from the post office around Christmas. (Details can be found here.) Santa’s Village was a full day of fun. We had an evening excursion booked and took the bus back to our hotel and got the kids in bed for an evening nap before heading out again. On one hand it would have been nice to stay at the village and have this fun right outside our door, but we really enjoyed the freedom that being in town gave us in terms of arranging everything we wanted to do.

Santa Park, the neighboring amusement park, of sorts, was closed during our January visit.  It seems strange that it would be closed, given the amount of visitors who were in town, but nevertheless, its opening dates are limited to November, December and early January.

Santa’s Village is a commercial place – it’s for profit, but it felt more like a fun place for the kids to experience Santa and some wintertime fun.