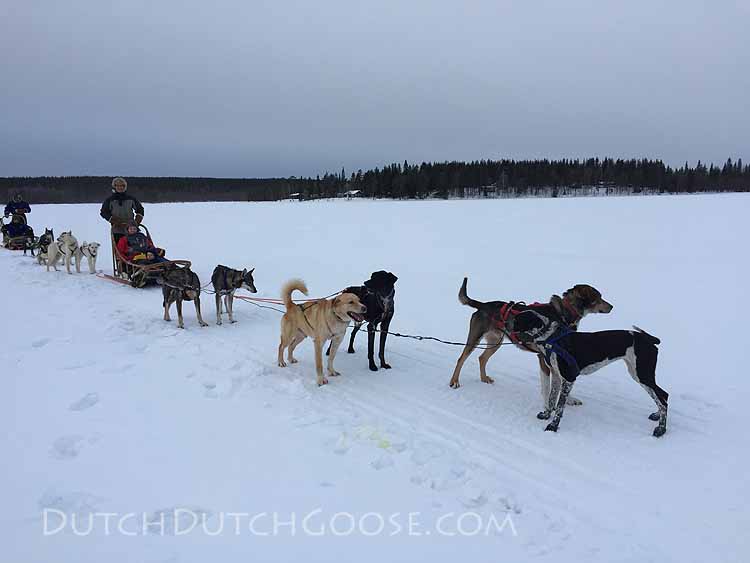 The first excursion we had planned for our Lapland trip was an afternoon husky safari with Lapland Welcome. The Lapland Welcome office is easily reachable in downtown Rovaniemi. We had just arrived that morning though and opted for their free pickup. Our hotel had a front and back door and we were not really sure where to wait and ended up missing the driver. Luckily, he was able to come back and pick us up within minutes. We were all decked out in our winter gear when we arrived in the Lapland Welcome office. They have plenty of gear for you to borrow as well. We opted to take their hats and gloves but stay in our own snow suits. Fully dressed we loaded into the van for a drive to the dog sled camp. When we arrived they had all the sleds ready to go. We were joined by a larger group from one of the larger booking companies. The adults who would be driving the sleds were given a briefing on how to control the dogs. Then we were walked down the row and loaded into our sled. Since we had the little ones with us they put us in the lead sled. This would keep us close to one of the snow mobiles in case we ran into trouble. We did run into trouble a couple of times by dropping items off our sled so it was nice to have help. The advantage of taking the longer ride was the opportunity to drive your own sled. Shorter rides are fun, but when you go out for an hour you really get the feel for the dogs and the sled. Once the group was ready to go, they released the break and the team took off. Jeff was an excellent driver. We took some turns and other groups skidded out, but not us!  (Watch a video of our ride here.) We stopped on a frozen lake to get some pictures and offer a chance for the other groups to switch drivers. Luckily, Jeff was happy to do all the driving duties while I took care of the kids. Each boy had a hot water bottle to hold, which we brought, and a blanket over them, which the company provided. When we got back to the camp the boys were cold, but fine. I just have to reiterate again what a great driver Jeff was! Some of the turns were icy and it required him to throw his weight around to keep us on track. We went into the house to warm up, use the bathroom and get some glogi and gingerbread.  Once we had warmed up we headed back out to meet the new puppies. These little husky pups are so very cute and loved getting lots of attention. The big little would have taken this one home with him if we had let him. They pulled a few out for people to pet up close. Sigh. I checked out this mom’s little ones, while she checked out mine! They were seriously just the sweetest.

Once we were done with the puppies we hopped back in the van and were taken back to the hotel. The kids were exhausted but couldn’t stop talking about the puppies. A new game at the house is dog sled, where they pull each other around on the wheely bug pretending they are dog sledders.