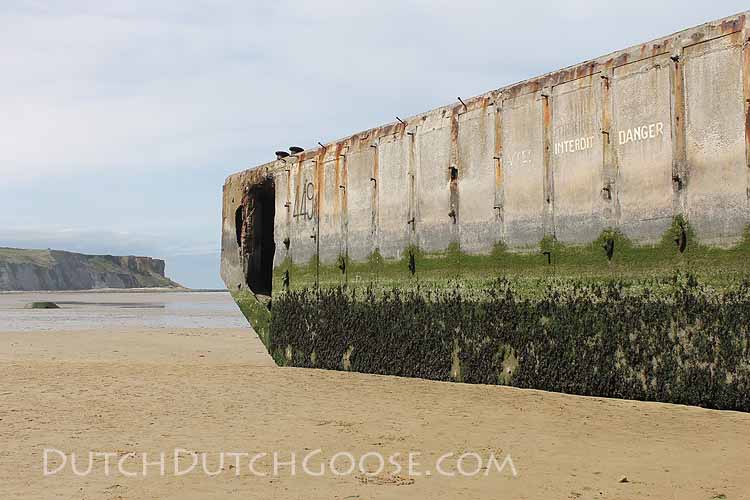 When we decided to rent a camper van and stay on farms as part of France Passion, we knew this trip would go against our normal overly-planned style.  Instead of a full itinerary, we highlighted some “must see” sights and went from there. We knew we wanted to see the D-Day sights that lie on the Normandy shores of France. That was probably our #1 goal for the trip since Normandy is best seen by car/RV. Many tourists day-trip from Paris to see Normandy but there’s no better way to ‘feel’ the place than by being there a few days driving and biking yourself around. We departed our farm stay at La Pommeraie in Juignettes early in the morning knowing that we needed to make a stop for water and dumping. The Brttish RV couple staying next to us at the farm had pointed us to some free dumping sights. We set our sights on the “Super U” grocery store on our way toward the Normandy shores.

Finding the Super U was the easy part. The booklet told us the dumping sight was “behind” the store. We carefully drove behind the Super U, only to find ourselves at a dead end – a really long dead end. I hopped out of the van and helped Jeff navigate around old grocery shelves and other trash stored behind the store. A super helpful employee came out to shout at us in French that we should turn around. Thanks. The kids found this hilarious. Jeff found the dumping and water station near the gas station. Water cost €2 to fill up (per 100 liters) and dumping was free. We were not able to empty our gray water here. I ran to the grocery store with the Middle and Little Littles while Jeff and our Big Little worked on filling the camper van up. (We left the Netherlands with a less than full water tank since we had such a long drive. Water is heavy and consequently decreases your fuel economy.) When I returned from grocery shopping I found our camper van in the middle of the parking lot. The boys were inside showering now that we had a full tank of water. I made lunch while we finished getting the group showered. Our poor Big Little ended up with a cold shower since we had not yet figured out how to heat the water. Jeff would say that I’m oversimplifying and that what happened was the freeze-warning valve opened because the night prior was near freezing. The valve needed to be closed in order to heat the water and it took us a wee bit to figure that out. When we were all done showering and doing dishes we went back and topped off the water. Driving was a bit precarious as Google continued to try to get us to our destination faster by routing us through small towns, something you do not want to do in an RV in Europe. We also faced several not so well marked “detours” that set us back even farther. We finally arrived at Arromanches. Our camper van neighbors at La Pommerale suggested we park at the visitors center overlook and walk down to avoid taking the camper van into the town. This was the perfect plan. We parked our van and enjoyed the views from the cliff. The yellow flowers of the Rapeseed plant were in bloom everywhere, including in the field we parked in. You really have to see Port Winston from the cliffs to get an idea of the scope of what the British accomplished here, building a harbor within days (4 miles long). The Americans built a similar harbor at Omaha Beach, but it was destroyed by a terrible storm 12 days later.) Port Winston, however, survives in part. The walk down to the beach is quite steep but goes quickly. You are treated to views of the beach the entire way down. You will also pass a section of the pontoon road, an anti-aircraft gun and a Higgins boat, which ferried the men from the naval ships to the shore. We inadvertently arrived at low tide giving us a ton of room to explore the beach. The beach at high tide would be fine to see, but try to go at low tide if possible. There are several rusted floats that supported the pontoon roads. These are now home to sea life when the tide is in. It’s incredible to imagine these being towed over from England and set into place on the beach to offload the soldiers and supplies needed for D-Day. The large pontoon that stands alone in the center of the beach is the most dramatic thing to see (and poke your head inside). We avoided any of the museums worrying that they would be too graphic for the boys. We explained the battle and let them explore the beach. They loved looking for shells and other sea life (they are big Octonauts fans these days) while Jeff and I reflected on the magnitude of the beach. We briefly walked into the town, which was always a resort town, and now seems overly touristy. We grabbed some treats at a patisserie. We all picked a treat from the case to enjoy on the benches overlooking the beach. Thanks to another “detour” we passed our farm “home” for the night, Le Grand Fumichon en route to the German bunkers. These bunkers were part of Hitler’s Atlantic Wall defense, something we’ve seen quite a bit of in the Netherlands. (You can read about our visit to the bunkers in the Netherlands here.) We decided to pop in to the farm and check it out before continuing to the bunkers. This farm is super impressive, inhabiting an old farm manor. We were instructed to park in the orchard. The sun was out so we unloaded the bikes and biked to the Longues-sur-Mer Gun Battery. The bike ride is a bit hilly, but arriving on bikes meant we could bike right up to the bunkers. The boys climbed into a few of these still-intact bunkers. I joined them on top for some amazing views. The guns at Longes-sur-Mer are the only original coastal artillery guns still in place in the D-Day region. We grabbed the bikes and headed down the path toward the sea. Here you can see the lookout bunker, connected to the gun batteries by buried telephone wire. It was a quick ride back to the farm from here, where we popped into the store for a Calvados tasting. Neither Jeff or I have a taste for alcohol so we left with a bottle of cider and some juice for the boys. There was a lovely little pond full of ducks, a chicken coup and some cows that the kids enjoyed checking out. We were lulled to sleep by rain on the RV roof. The American Cemetery was the next stop on our D-Day tour. They have a large RV parking area, although overnight parking is prohibited. Our Little and Middle Littles were sleeping when we arrived. I headed into the cemetery with our Big Little. We bypassed the visitors center due to the long security line and instead headed straight to the cemetery. Our Big Little (5) had lots of questions but I think appreciated the visit and adapted to the somber atmosphere.

The cemetery is quite stunning and situated to overlook Omaha Beach. You used to be able to walk down to the beach from the Cemetery but those trails have been closed off due to security concerns. We drove down the road to the beach and easily found parking right along the shoreline. Omaha Beach doesn’t have much to offer in terms of things to see, but it is something to experience. There is a large art piece in the center of the beach that is stunning. While the kids ran around looking for sea creatures to rescue (have I mentioned the current Octonauts obsession we are experiencing) Jeff and I envisioned the soldiers running through the water, up the beach to take cover from the fire coming from the cliffside. The soldiers would take cover against the sea wall. They would organize and run again to the safety of the cliff walls, which they had to scale to reach the Nazis’ position. It is truly amazing and something I could not get a grasp on without seeing it in person.

There are a variety of museums around here as well. We did not check any of them out due to graphic content and the age of our kids. Most of them have the larger exhibit pieces outside though so we were able to show the kids the triangles that sat out on the beach necessitating a low tide invasion.

We followed the Rick Steves driving tour down the remainder of the beach. He points out some old German batteries that are now a museum and another that is part of a hotel. There are some windows in the cliffside and a few other notable pieces outside of museums that he pointed out. Our last stop was Point Du Hoc where the land is literally pockmarked from allied bombing raids. This was the most crowded attraction on our trip. The boys brought their excavation tools and had a blast exploring the craters that literally cover the landscape. It is said that over 95% of this site was hit by bombs. You are able to go in a few of the bunkers that remain, something the boys and Jeff took full advantage of. The allied forces bombed this area for years. The bombs of the time required several direct hits to take out a bunker. There are a few bunkers that are gone and pieces of concrete that remain. However, they did not take out enough of them so on the eve of the D-Day landings a select group of U.S. forces scaled the cliffside to dismantle these guns. It’s truly an incredible sight to behold. It is one of the areas that pictures truly cannot capture. The craters that are just everywhere and how even now visiting you have to walk through them and over the hills that are created as a result. You could spend a whole vacation just exploring the WWII sights in Normandy. I think many of the other tourists we encountered did. Jeff and I felt our cursory visit really put so much of D-Day into perspective and was about as much as you’d want to devote with young kids.