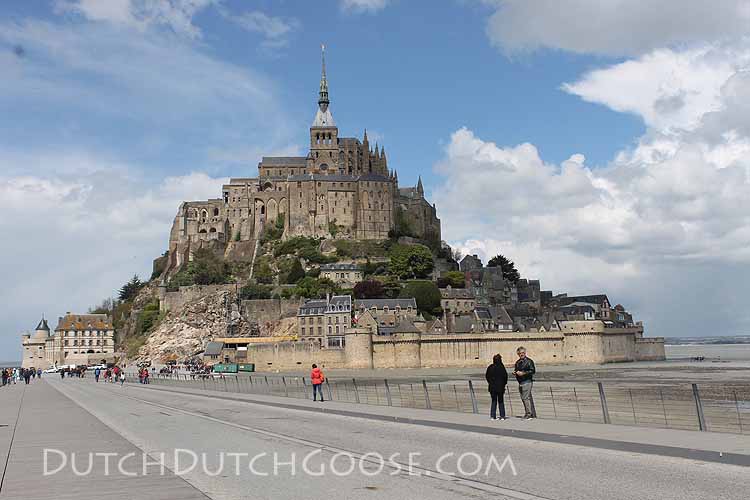 Mont Saint-Michel, a historic fortified town and monastery in northeastern France, has been on our Europe bucket-list since we arrived. This iconic island is something I felt had to be seen. I also had large expectations about its grandeur. I was right that seeing and exploring the island was worth the trip, but it took up much less time in our itinerary then we envisioned. Driving down the road we could see the Mont on the horizon. We pulled off to snap a few shots. I couldn’t help but imagine being a pilgrim on the way to the Mont Saint-Michel abbey and seeing it rise on the horizon, but still having so far to go! Luckily, we were driving. Proving that we are thoroughly Dutch, we unloaded the bikes and attempted to bike over the bridge to the island. We only got as far as the access road to the new bridge before signs informed us that while we were allowed to bike to the bridge we would not be allowed to bike over it nor park on the Mont. (When we finally made it over, we did see a few bikes parked by the entrance gate.) We turned back and parked our bikes in the bike parking located at the front of the personal car parking. We scrambled up on the dike to take a family photo with Mont Saint-Michele. (If you are traveling by RV or large vehicle, it may make sense to bike to the bike parking as it is quite far from the assigned parking lot.) The personal car/bike parking is very close to where the carriages and shuttles leave from. Alternatively, we could have biked all the way to the hotel or restaurant, since the shuttle makes stops there as well. We opted to take the free shuttle which leaves frequently and drops you off on the new bridge just in front of Mount Saint-Michele, although it is still a bit of a walk from here to the gates. We visited during low tide. The tidal flats are incredible. The boys were obsessed with getting stuck in them. (Getting stuck in the tidal flats was depicted in the Bayeux Tapestry we had visited earlier in the trip.) We should have done a tidal walk, but it was raining and the boys were in a bad mood. I think though we all would have enjoyed venturing out with a guide. As you enter Mont Saint-Michele and funnel through the front gates it gets crowded fast. I can only imagine how crazy it is in the summer. We followed the Rick Steves guide and got off the main road as soon as possible. Once we were up on the ramparts we found ourselves with much more space. There were only a few other visitors enjoying the views. The ramparts provide views into nooks and alleys that you otherwise might not see. You also get stunning views over the tidal flats. The new visitors center and parking means that the facility is mostly hidden out of sight — no longer interrupting the views. There are plenty of little shops that front the ramparts if your looking to shop. We just needed some postcards and found some lovely options. We ventured down on the main road to find some lunch. The kids were hungry and quite a few places do not open until noon or later. All the menus looked roughly the same, so we did not fret too much about eating at the right place. We ended up at La Croix Blanche where we sat upstairs and they doted on our kids. They had a kids menu and the food was good. The rain also started to come down hard, so we enjoyed a leisurely meal. After lunch the boys found this narrow stairway which we had to explore. So up we went off the crowded main street to another hidden path. We took this path up to The Abbey. Outside the gates the line for entrance had grown long. The boys were lobbying hard for more exploration and not to visit the museum. We relented and skipped the abbey and historical museum. Instead, we spent another hour exploring around the walls of Mont Saint-Michele. We even found a little wooded area on the left side of the island for the children to play in the bushes. There is access to the sand bar and water on the back of the island as well. Storm clouds started gathering again and the wind picked up, so we headed back toward the shuttle stop. We had toyed with walking back but with the wind and the big and middle little on foot we decided instead to board the bus. I gave the mont one final look and wave goodbye. I’m so glad we spent time exploring this magical island, but had vastly overestimated the time required to see it. I honestly thought we might be on the island all day. My rough plan was to spend the night in the parking lot (which is allowed).

Instead we found a lovely little camp ground, Camping Le Freche A L’ane,  to spend the night out. We did not have many France Passion options where we were headed and were in need of water and dumping so a camp ground seemed like a good fit. We were the only ones on the camp ground in the little French town of Pleboulle. There was a small playground on the campground and one in the town.  The campground also had plenty of open space for the kids to run around.  We asked for a space near the wifi and thus were parked right next to the main building! In the morning, the office delivered the bread and pastries we had ordered. The town was as cute as could be. There is normally a restaurant, which we would have visited but it was closed for a few weeks, including the time we were there. Instead we enjoyed some RV cooking and listened to the rain as we fell asleep.