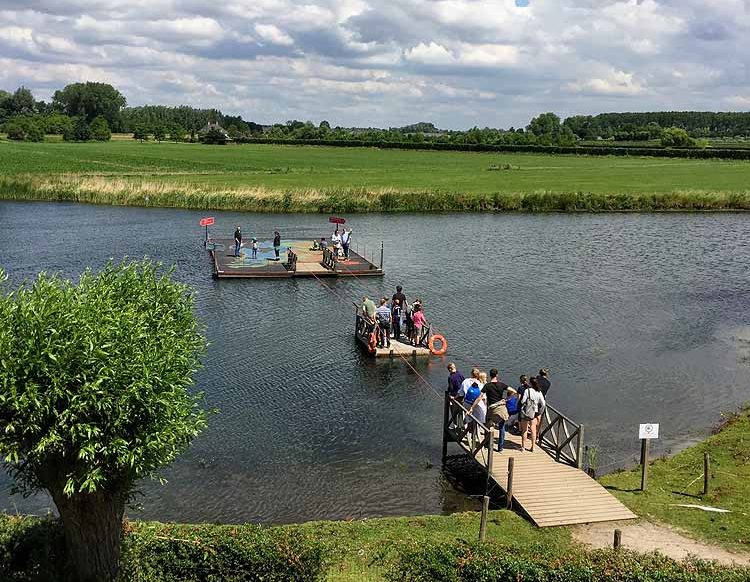 I recently found out that the World’s Best Children’s Museum is in the Netherlands. About an hour drive from us, GeoFort  has turned an old fort into a museum on maps and navigation. GeoFort blends indoor and outdoor exhibits into the perfect outing for kids of all ages. It is also part of the Museumkart program, making it free to cardholders. Your going to want to arrive early to GeoFort as it becomes incredibly crowded. Although, what else do you expect from the World’s Best Children’s Museum. (It was literally selected as such in 2016. Read more here.) We arrived just as the museum opened on a rainy morning and still found the main parking lot almost full. Once inside, you need to download the app. This is particularly important if Dutch is not your language of choice. GeoFort is equipped with wifi, making download and use easy. The app translates most of the signs in the museum to your language of choice, as well as provides more information about where you are standing. If you keep the app open it will even alert you when you are near something interesting. The kids loved using the phone to scan the signs. It is a great way to get to learn about the fort at the same time as experiencing the geography exhibits. The exhibits are spread both inside and outside throughout the fort. There were rooms of touch screen monitors showing different types of data on maps. You can zoom in and out and tap for more information. Older kids will be wowed by the information displayed (like which ships are moving in and out of Rotterdam harbor and what flag they are operated under). My younger kids loved moving the maps and seeing places we had visited. Another room inside the fort was showing a full length movie about the Netherlands from above. There were airplane cockpits set up with interactive displays allowing kids to use arial surveillance to spot invasive species, fix broken railway tracks, and find differences in images taken at different times. We also found André, the Netherlands astronaut, who is all the rage. (Albert Heijn’s current promotion is stickers about André’s space adventures.) In another part of the fort, we ventured through an old tunnel now lined with rope lights that flashed and made patterns as music played. Our favorite indoor find, though, was the topographic sand table. This sand table sits bellow a projector which changes its color based on the height of the sand. As the kids build the sand appears to turn green and then white as the sand goes above the tree line. As kids (or adults) dig lower, the sand turns blue to represent water. We could have played here all day. We would build one landscape and the room would flood with people, everyone digging and building. Then the room would empty out and we would level everything to start again.

I managed to get a time lapse of one such building session. There are plenty of outdoor activities to enjoy as well. This maze is full of things to smell and activities to complete. You work you way around the maze finding your way to huts with displays. This simulator brings you through the creation of earth in just a few minutes. You get to feel the earth shake as earth is created under your feet. Venture out to this floating island to discover how much of the Netherlands sits below sea level. The boat keeps the crowds on the float down and its fun to explore the country and see how low different parts actually are. There is plenty of green space inside the fort and picnic tables are everywhere. Online it says that picnicking is not allowed inside the fort. We found the tables to be full of people enjoying a packed meal. We, being rule followers, inquired at the desk where we could eat our meal. We were directed to seats outside the entrance of the fort. We set up our lunch and were soon told that this was restaurant seating and we could not eat there. We asked again where we could eat and were told to try the parking lot. There are literally tables everywhere inside though… just saying. Outside the admission area of the fort, by the restaurant, is an amazing playground that on its own is worth the trip. The playground tells the story of the Bat’s life. (At this point we were just having too much fun for me to get the app out and learn any more!) The playground is intended for older children but my Big Little had no trouble on many of the obstacles. He was a bit sort for a few of them and happily hopped off and ran to the next one. Obviously, not for the faint of heart. The Middle Little needed more supervision on this playground but was still able to enjoy many of the obstacles. One of the things I love about these playgrounds is that the boys really feel accomplished when they complete something. Our Middle Little would yell “I did it” after crossing over the suspected log bridge. See the picnic tables. I advise having packed lunch here and not in the parking lot! An old bunker that was once part of the fort has been converted into part of the play structure. The kids can climb on the roof via the cargo net or head downstairs to check out the bunker door. Don’t worry they’ve locked the door to get in! My favorite part was the build your own maze section. Wooden boards could be moved between these pegs to build a maze. We helped with the transport of the wood, but this maze is completely kid designed. The boys chased each other through it for a while before changing it around again. This is by far one of the coolest playground items I’ve seen. I’m glad we were there early enough to enjoy it on our own a bit. When we returned later in the day, it was overrun by older kids.

The GeoFort is only open on weekends and school holidays so check online before coming. There are tons of extras like Minecraft activities and quests that were well above our children’s level. We did not see anyone not having a great time, so this is sure to be a win for just about any family.