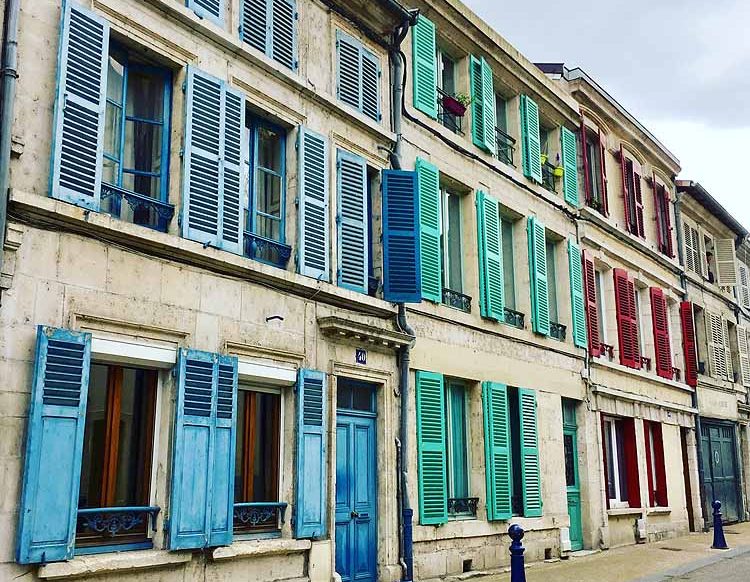 Our first stop was the Citadelle, built in 1634. The fort served as a strategic location throughout history but is now known for its role in World War I. The Citadelle served as the final staging location for troops going to and from battle. The fort provided a number of services and served as a meeting spot for the French military.

It now houses a Disney-like ride that takes you through the fort which is staged with dioramas. We thought this would be a good way to introduce World War I to the boys, but it turned out to just be creepy. Our Big Little was pretty scared. We tried to keep it light in our car (each group goes in their own vehicle) but when we had to get out and walk through the last part he cried the whole way. If you don’t have kids with you the pace of the ride is slow and sometimes I honestly wasn’t sure what was going on. The ride operator can change the language in your car to whatever language you want – just ask. When we left the fort we went for a walk into Verdun. I’m quite jaded from living in Europe now. Verdun is so cute and yet it only rates as average for me these days. We went to check out a few of the monuments in the town. We were also hoping to find a playground, which didn’t happen. My Middle Little was not very pleased about walking up the stairs, or just walking in general at this point. The Victory Monument in Verdun was in full bloom with its French blue, white and red. The monument sits above the center of town and is easy to find. Each November 1st, for Armistice Day, the eternal flame from the Arc de Triumph is brought here The medieval gate is the only part of the city walls that remain and it leads onto the main square. We enjoyed a walk down the river and then through the gates. The Big Little and I were reading an illustrated version of Harry Potter on this trip. He could not resist popping into this telephone booth to see if it led to the Ministry of Magic! We walked back to the car and followed the Rick Steves Verdun driving tour to see a few more of the World War I sights. We skipped some of the museums he mentioned, sticking to the outdoor sights. L’Ossuaire de Douaumont is an amazing structure in the cemetery that holds the unidentified remains of soldiers in the war. You can peek through the windows lining the outside of the monument and see the bones piled in each of the sections. There are several areas where you can still visit the World War I trenches. They are mostly covered over, although sections have been preserved to show what they would have looked like. I was struck by how small they were. Jeff said that trenches changed the face of warfare and prolonged the war. There are also several bunkers in the area to visit, a few of them scattered in the woods with only a small pullout nearby. The Little Little fell asleep during the driving tour, but the Middle and Big Little got out with Jeff to explore Fort Douaumont. I enjoyed a bit of quiet time because honestly, I was a bit forted out. The kids though loved checking out another fort where they could climb and explore. We pushed to our France Passion stopover, Ferme Auberge Gite Chantereine. They have a Farm Inn and a Restaurant, open on weekends, in addition to a small farm store. The 13th century convent has been converted into a farm. The RV parking is right in the central courtyard. There were plenty of farm animals for the kids to enjoy. There was a small picnic table to enjoy dinner, but due to some light rain we ate in the RV. The property was beautiful and remote. We enjoyed both an evening and morning walk around because we were enjoying ourselves so much. This was our last farm stay of the trip as we hit a campground on our last night. We loved visiting all the animals and just enjoying the property a bit as we soaked up the last of our time in the French countryside.