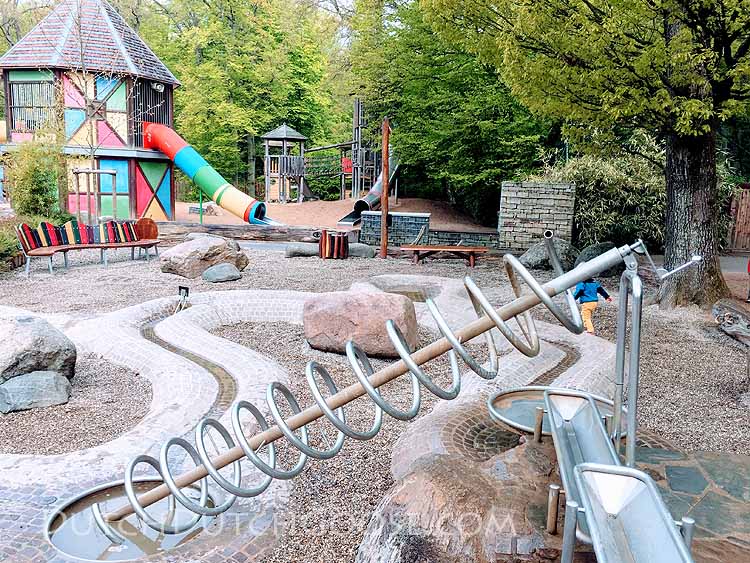 Parc Merveilleux is a truly European theme park and zoo located in Bettembourg, Luxembourg. It lacks the large rides that make up American “theme parks” and is instead filled with playgrounds, small animals and small rides.  You can visit from Easter to early October. There is a parking lot across the street and when that fills they run a shuttle from a larger lot. The park opened in 1956 and thus you enter through this lovely gate that wreaks of European ambiance. A few meters up the path you run into the modern entrance gate complete with turnstiles.

The large playground just behind the entrance has something for everyone. We were at the park when it opened and were the only people on the playground. The big boys tried out every possible combination of running around the structure. It is clear that the park has been adding on through the years as this large playground has so many styles, but it really adds to the playground’s charm. . .and fun! The water playground had many of the elements we have come to love from Dutch playgrounds. I was immediately set to work pumping the Archimedes Screw to provide the river of water. The larger water pump had been turned off, likely until the weather was warmer. This incredibly cool playground was the Big Little’s favorite. He called it the bird nest and was up there for an hour climbing around. Our Middle Little made it up there and then got scared. Jeff had to go up and get him. The Luxair Airplane was our Middle Little’s favorite. I think I could have left him there all day.

These are not even half the playgrounds. There is a cactus playground with another rope bridge over ti a walkway and a slide. A pirate ship playground. A footpath, where you take off your shoes and walk through different textured items. This place went on and on with cool stuff for kids. The little rides like the train and cars cost extra, but the charge is minimal (1 Euro). It drives me a bit batty to pay extra for rides at an “amusement park” but it seems to be the European way. The kids loved this little train ride, which made several loops through a fairy tale forest with some animal enclosures. There are some fairy tale houses to walk past. You peek into the houses to see popular stories depicted. This is another hallmark of European parks. The kids love them and like to tell us the stories as they look in. The park also has a zoo portion, which honestly we almost forgot about. This includes mostly livestock and exotic birds.

We spent the morning here and could have let the kids play on the playgrounds most of the day. We had a few more stops to make though and left around lunchtime. There is a cafe at the park but we opted for a meal back in the RV.

If you’re nearby and have playground loving kids a stop at Parc Merveilleux is well worth your time.