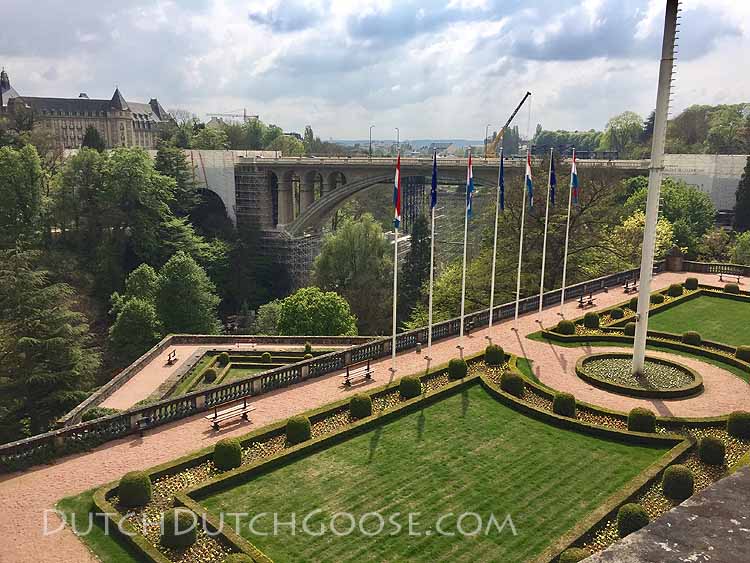 An Afternoon in Luxembourg City

We popped into Luxembourg City for the afternoon mostly because we were passing through. We had no plan, which was the point of our France Passion trip, but found lots to do in the city. The first issue was where to park the RV. We had read online that the city parking lots could accommodate large vehicles. After checking several of them only to find them full or under construction we found a truck parking lot on the outskirts of the city and parked there. Jeff found a nearby bus stop. We purchased tickets using the Luxembourg bus app and off we went into Luxembourg City. We did not have much of a plan so we just walked around the city exploring. While much of the city was under construction we found several scenic streets to venture down. We paused in front of the Royal Palace. The boys love to watch guards march back and forth. In summer the palace is open for tours, but you must pre-book as there are only 40 tickets per tour. While the boys watched the guards I slipped into Ernster, an all English bookstore. It was small but perfect for browsing. I thumbed through the Luxembourg Family Guide, which looks like a must read for anyone planning a longer visit with kids. It was just so nice to bookshelf surf a bit. I returned to find the boys eyeing up The Chocolate House. We popped in and found an incredible table upstairs against the windows. We each chose a different hot chocolate spoon. It was fun to stir them into the hot milk and top them with whipped cream and homemade marshmallows. The Middle Little ate only the marshmallows and whipped cream leaving the hot chocolate for Jeff to enjoy. The Big Little enjoyed his “For Kids Only” hot chocolate spoon. He drank up every last drop while flipping through a menu of cakes. Spirits (and blood sugar) lifted we set off for some more exploring. Our Big Little took the lead as tour guide. He told us all about this statue of Grand Duchess Charlotte. We peered over the ramparts and enjoyed the view but we didn’t go in, despite it being one of the top things to do in the city. Honestly, we just couldn’t do another fort. The view here is stunning though and we sat on the wall and took it all in. Then we did what we do best and found a kicking playground. We had eyed this one up when we got off the bus, but didn’t let the kids see it till the end of the visit. They were over the moon. There is a small water playground tucked behind the ship as well. Rain started pouring down while the kids were playing so we all took refuge in the pirate ship for a bit. Any time the rain let up the Big and Middle Little ran onto the playground to get some more play time in.

As the playground is such a short walk from the bus stop we were able to time our departure so we didn’t have to wait long at the stop. We were pleased to find our RV still in the truck parking lot where we left it. We drove to the Belgium border to try to make some ground on our long drive home. There we happened upon a  little campground run by a Dutch couple and it was FULL of Dutchies. We instantly felt at home! We had the most amazing dinner in the campground restaurant. You could choose Salmon or Steak and both were delicious. We enjoyed a local beer with dinner while our Big Little happily chatted in Dutch to anyone who would speak to him. We were the only family in the place but we felt at home. That night in the campground was our first and only use of the RV levelers. We had to get help from a Dutch couple as I timidly coached Jeff onto them. We happily spent our last night in the RV perfectly level, enjoying the pitter-patter of rain on the roof!