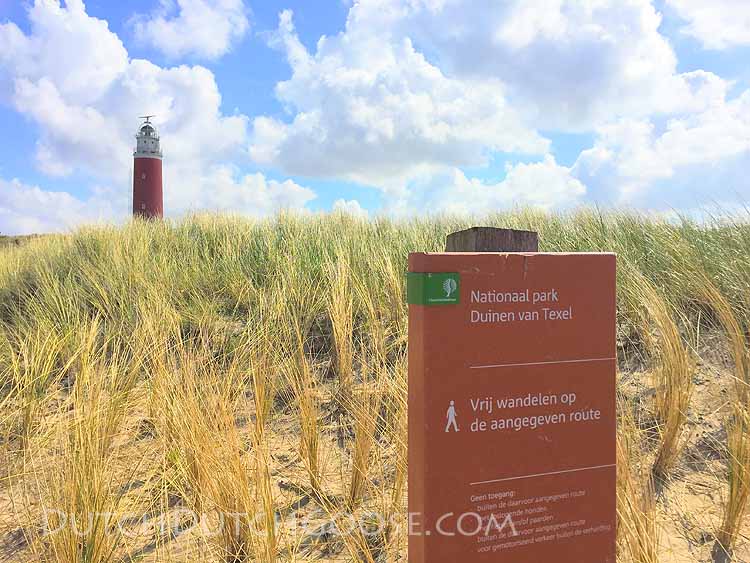 The  Texel Lighthouse on the far North end of the island was our first stop after departing the Texel Ferry. It’s just a 20-minute drive along the island from the ferry to the lighthouse (paid parking lot). There is small walking path that leads up to the base. The lighthouse is a symbol of Texel. You’ll see it in almost all photos of the island. A visit to the lighthouse (€4.50) requires climbing the 118 step spiral staircase. There are exhibits on each floor. The ground floor talks about the necessity of the lighthouse and the dangerous sea that led to many shipwrecks prior to its construction. Halfway up, stop to see the World War II bullet holes that remain in the lighthouse. The battle on Texel and the Georgian Revolt stands as one of the final battles of World War II. The lighthouse suffered such serious damage in the war it had to be repaired. Instead of building a new lighthouse, they installed a shell around the old one, making it possible to see the bullet holes in the old exterior wall.  There are also some bunkers remaining at the base of the lighthouse that were part of the Atlantic Wall defense line, but they are closed to visitors. The top of the lighthouse affords incredible views of the north shore. You are able to look onto the neighboring island, Vlieland. As soon as the boys looked down on all that sand they instantly wanted to head to the beach to explore. The beach at the north end of Texel can be extremely wide, depending on the tides. We brought out the kites and took advantage of the windy location. We never made it down to the water at this beach. We were having too much fun enjoying the kites and admiring the horses coming down the beach. Our kids are too little, but horse riding here would be incredible. (See your options for horse riding on Texel here.) Much to our insect loving childrens’ delight the dunes were covered in brown-tail moth larvae. Our kids picked them up with sticks and studied them.

My trip to Texel was sponsored by the Texel VVV. The lighthouse gave us free admission in return for a review of their visit experience. All opinions are my own.