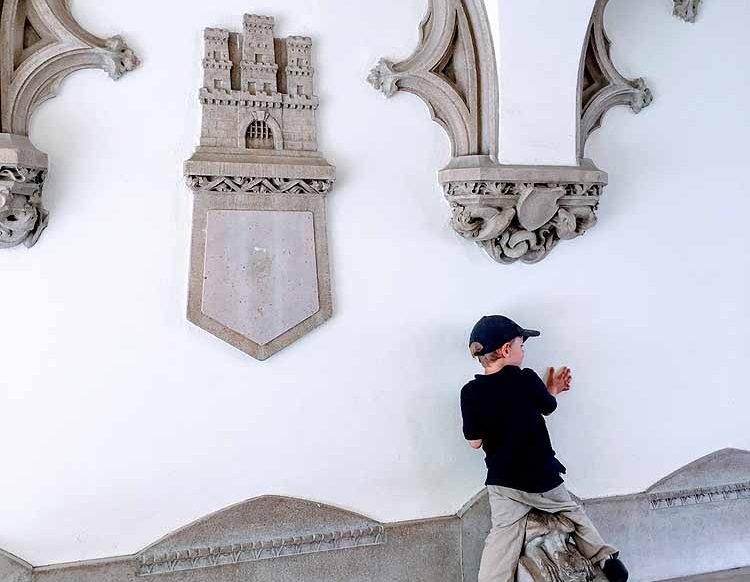 A Family Afternoon in Bratislava, Slovakia

Bratislava, Slovakia may not be on your radar, but it should be. If you are visiting Vienna you’re only 34 miles, as the crow flies, from Slovakia’s capital city. An hour on the train, bus or boat will land you in Bratislava. (We took the scenic Twin City Liner hydrofoil.)

Bratislava is an 18th century town with a storied history. It’s city center is nearly all pedestrian-only making it a great place to visit with little ones. It’s mostly known for its great bar scene, and is a popular location for stag parties. We, however, found it to be perfect for a family afternoon. We arrived with no real plans other than to just try to see Bratislava. That is exactly what we ended up doing. Our Rick Steves Vienna guidebook had a Bratislava walking tour which we loosely used to find our way around town. Rick is not particularly kind to Bratislava but we found it much more charming than his book made it out to be. (If you’re not with rowdy kids, consider taking one of the Be Free walking tours of Bratislava.) The Twin City Liner drops you off just under the UFO bridge and tower. The ‘New Bridge’ as it is actually called is the seventh longest hanging bridge in the world. The UFO looking thing is actually an observation deck and restaurant. We hear the views are outstanding, but we ended up out of time for a visit. St. Martin’s Cathedral is visible from the waterfront. It’s a lovely Roman Catholic church that is built into the old stone wall of the city. It served as the coronation church for the Kingdom of Hungary. On our leisurely stroll there were several open courtyards that we popped into just to have a look. These are one of my favorite European features, as you are just never sure what you will see. The buildings of the town still have some cannon balls from the Napoleonic Wars lodged in them. Napoleon bombarded Bratislava for three days setting the whole south side of the city on fire and leaving more then 100 cannon balls lodged in buildings. Today only five of them can be seen. (The one in the photo above is just above the picture with the molding set around it.) Town hall on the main square also has a cannon ball lodged in it. (It’s just to the left of the Gothic window and impossible to see in this photo.) Bratislava is famous for the bronze statues scattered around town. We did not search them out but came across several of them organically. The bronze Napoleon Soldier, on the main square,  is known for “eaves dropping” on visitors. My boys were not fooled. We also found Dr. Doolittle on the main promenade enjoying some sunshine. We had a little hunt to see how many different animals there are on the statue. Cumil, the sewer worker, is one of the more famous of the bronze statues. The boys thought he was hysterical. I think my Middle Little is still a bit confused by him. This is the only silver statue in the bunch and the only one of a real person – Schone Naci. (You can find a listing of other bronze statues on the Welcome to Bratislava blog.) The main square was hopping with some sort of festival which we’ve found to be quite typical in European cities on a weekend. We passed through the main square and found a lovely shaded pass through with stone benches. Just on the other side was a children’s festival. There were clowns, balloons, hula hoops, buses to climb in and even a station where you rode a bicycle to power a cotton candy machine (called candy floss in Europe). All the activities were free as part of the festival. We let the kids ride the bicycle to have their first cotton candy! The kids were tired by the time the festival started to pack up so we loaded everyone back up and continued on our walking tour. We headed to Michael’s Gate, which is the last remaining gate in the city wall A statue of St. Michael and a dragon are at the top giving the gate its name. Directly under the gate there is a compass rose listing the mileage to major cities around the world. As we continued our walk we found a small playground on the main promenade. We stopped here to let the kids play while we discussed a dinner plan. The boys quickly found other kids to play with. One of the most amazing things about travel is how kids are happy to play with any other kid who is kind, even if they don’t speak the same language. Using Foursquare we headed a bit out of the city center to Burgess Brewery. We sat upstairs and followed suit of every other family in there by ordering the meat on a spit meal which came with some vegetables. We also ordered some potato pancakes and beer. It was all delicious. On our way back toward the ferry we flipped through our book and realized how much more there was to see in the city. We completely missed the Bratislava Castle, which is sometimes called the “upside down table.”  If we had had a full day in Bratislava we would have surely visited the castle with its open center and views of the city.

We also missed the blue church, largely because we ran into the street fair and the kids were having such a great time. It looks pretty incredible though and is just outside the old city center. If you have more time in Bratislava check out this great list from the tourist bureau of outdoor places to visit with kids. When we left I felt satisfied with our visit, but we could have easily made a full day of the trip. This is a wonderful way to get out of Vienna, which can feel a bit crowded.

Just so you know, Twin City Liner provided our transport free of charge in return for an honest review.