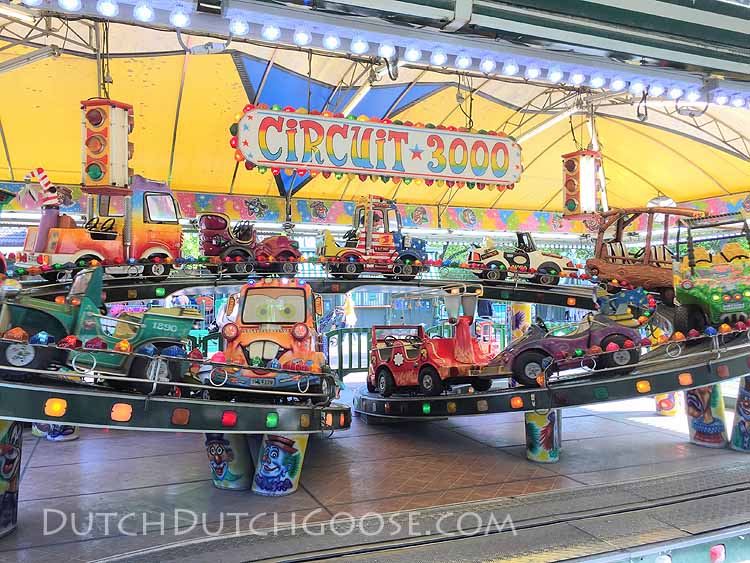 Le Jardin d’Acclimatation is well known in Paris but perhaps not to tourists. We visited the park on a Sunday in Paris, though should have gone earlier in our trip as we could have easily spent all day here. The garden is easily reached. You can drive and park, take the Metro or take a Bus. We however decided to arrive by a tiny narrow-gauge railway. This railway was opened in 1878 and connects the Porte Maillot Metro stop (one of the old city wall gates) to the Jardin d’Acclimatation. The train drops you off just inside the entrance gates near two large playgrounds. We tried to steer the kids away from the playgrounds and start with the amusement park rides before they got too crowded. We started with The Enchanted River ride, a garden staple since the 1920s. This five min boat ride is powered completely by a water wheel which creates the current in the river. It’s a beautiful ride and a classic that you shouldn’t miss. Then we let the kids pick what to do next, which is how we ended up on the car race ride. Without any prompting they decided to sit together in the American tow truck. Hysterical. There are drive-your-own cars for older kids. Our Middle Little was too little to ride, but enjoyed watching Jeff and the Big Little race around the course. The boys flew airplanes. Jeff boarded with the Middle Little while a wonderful staff member helped our Big Little into the plane and explained the ride. The boys also loved riding the frog hopper, although at the beginning we couldn’t tell if they liked it or were terrified. The Big Little rode the roller coaster with Jeff. I took a turn on the horse ride with the Middle Little. We popped over to the boat dock to try to rent boats, but it was mysteriously not open. Instead we grabbed some lunch mixing a few things from the Little Garden Pavilion and the mobile food trucks located on the property.

We were having such a great time in this one corner of the park that before we knew it, it was time to head to our train. We didn’t even get to properly play on multiple playgrounds in the garden. There is also a puppet show Wednesdays, Saturdays and Sundays, public holidays and every day during the school holidays at 3 and 4. If it’s warm there is also a paddling pool and fountains the kids can run through.

There is certainly enough here to make a perfect day outing. We felt satisfied with our visit but easily could have spent the day enjoying this lovely space.