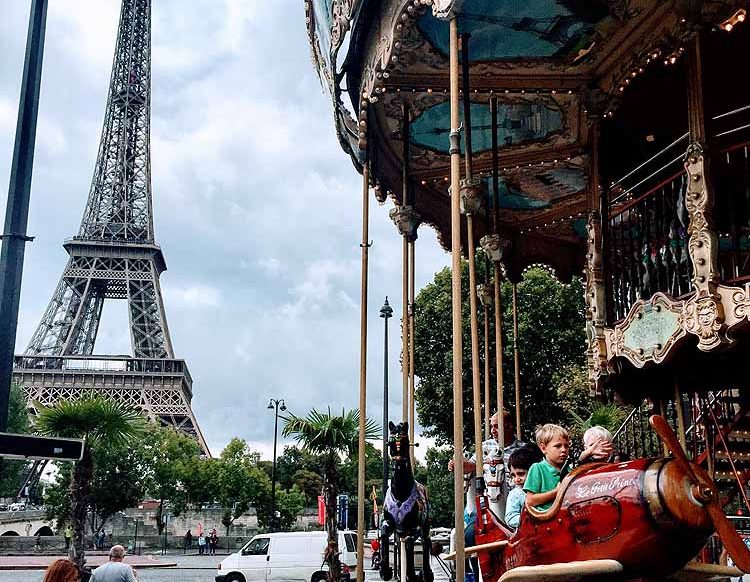 Our Paris friends were heading out of town for the summer, as Parisians typically do, and offered their house for a summer visit to the City of Light. We couldn’t pass up the chance to enjoy some of Paris’s amazing parks. We hopped on a Thalys in Rotterdam and were in Paris two and a half hours later. Jeff would correct me here and say two hours and thirty-seven minutes. A quick ride on the Metro (see our tips for the Paris Metro) and we were at our friends’ apartment. It seems that no matter where we stay in Paris we can always see the Eiffel Tower! Although most of Paris is closed in August, you can still find plenty to do, particularly with kids. We made no reservations, had picnics, mostly avoided tourist attractions and instead stuck to walking the city to find little parks. Every little neighborhood we wandered, off the tourist track, had a lovely little playground. This little one was ship themed and directly across from our Metro stop. Often these little parks almost go unnoticed, until you turn down a minor road and hear the sound of children laughing. There was a bit of rain in the forecast when we arrived in Paris so we set our sights on the  Modern Art Museum. The modern art museum has a variety of activities for children. Check their family schedule to see what’s happening before your visit. Just at the museum entrance you get a lovely view of the Eiffel tower. Jeff is so good about insisting that we stop someone to get a photo. It is a total mess trying to get everyone looking at the camera, but I’m always grateful for the family photo. Jeff has a few tricks. He always chooses someone under the age of 60 and only picks men who are walking with a partner. Jeff reasons that they take the best pictures because they want to impress their significant other with their kindness. No joke – it’s a flawless system you should adopt now. We actually never made it inside the Modern Art Museum, instead ending up next door at the Palis de Tokyo, where we previewed some really strange art. I can’t say I really recommend this for families, but the kids enjoyed it. The exhibition focused on dioramas of all types spanning many eras. The most interesting to the children was the section that focused on taxidermy and the dioramas you typically see in Natural History Museums. It was all a bit weird but the kids talked about it the rest of the evening, so that’s a win in our book. The rain passed while we were in the museum, so we opted to walk back to the apartment and enjoy some more views of the Eiffel tower. On our Winter visit to Paris we enjoyed a trip up the Eiffel Tower complete with ice skating. We didn’t really enjoy the views or parks surrounding it though. You can’t miss the two large carousels on either side of the Point d’lena bridge. The boys’ eyes lit up and we told them they could pick one to ride. They chose the closest one. We purchased our tickets at the booth and loaded the boys onto their choice as soon as the carousel came to a stop. Five has brought so much independence to our Big Little. We were able to leave him with the tokens, which he handed to the man explaining that he had his little brother’s token as well. They were all smiles as they pretended to pilot their airplane around Paris. Jeff and I stood back and enjoyed the stunning views of the Eiffel Tower behind the carousel. Apparently while we were watching the carousel my children had caught sight of a playground. We happily obliged their request for some play time. This lovely little park in the gardens bellow the Homme Museum is fully gated and has a stunning view. Benches line the fence. The Little Little was sleeping, so I found a seat while the boys ran around trying all the play equipment together. They both have picked up just enough French to say hello and thank you, which turns out is all you need to join local kids in a game on the playground. Sitting on the bench we decided that we should head back to the apartment and order pizza for dinner. We coaxed the kids off the playground and continued our walk. The sun popped out of the clouds as we were walking through Champ de Mars, so we stopped for some play time. The boys loved running around and taking funny pictures with the Eiffel Tower in the background. The Little Little had just started standing on his own, so they helped him up over and over coaxing him to walk to them. Then Jeff jumped in on the fun throwing everyone around a bit. Paris really is always a good idea. The next day we found ourselves in Le Jardin du Luxembourg for an afternoon excursion. This park is packed full of fun stuff to entertain your kids. We started with the boat rentals on the giant fountain. This has been the thing to do here for over 90 years, so while you’re playing you’re also experiencing some history. You rent your boat for the hour from a little stand near the fountain. You can’t miss it. You’re given a boat and a stick. You set your boat out to sail on the lake and then race around to reach it on the other side. The wind was blowing the boats everywhere so this was a great activity. We literally could not keep up with the kids as they ran around the fountain. (Secrets of Paris has a lovely post on these boats that’s worth checking out for more details on its history and some fun tips for your visit.) We paused briefly to watch some Boule. I’m not terribly certain of the rules, but it looks quite similar to Bocce. The Big and Middle actually found seats to watch for a bit. It is always amazing to see what captures their attention. A local Frenchman tried to explain some of the rules to us, which made us want to watch even more. The playground in Luxembourg Gardens is not to miss. There is a small fee to use it, but your ticket is valid all day for you to come and go. The playground is fenced and there is something for all age groups. They also have bathrooms inside the gates. Our Big Little quickly ran over to the large spider web. These net towers are one of his favorite playground features. He easily climbs to the top and surveys the rest of the playground. Our Little Little practiced his walking by pushing the stroller across the open area of the playground. There was some small equipment he could have taken advantage of, but he prefers to stay close to his big brothers. The other unique aspect of this playground is the zipline coaster. Ziplines are a popular feature in playgrounds around Europe. This one takes it to the next level sending you around a track on a zipline. There are several ropes attached and the kids did an amazing job of policing themselves so they didn’t run into each other on the track.

You’ll also find all your typical playground equipment here. Plenty of things to climb, slide and ride. We loved having access all day so we could just pop in for a little play break. There is nothing better than large open stretches for the kids to run. Jeff ran over to the Marionnettes du Luxembourg to get our tickets for a puppet show. The first few rows are reserved for the kids so there was no reason to rush. They are strict about no pictures though, so just sit back and enjoy the show. We left at the intermission as the kids were having some trouble following the plot and were growing hungry. We exited the park and stopped at the first Creperie stand we found. We let the kids choose whatever type of crepe they wanted. Everyone made good choices and it was a quiet walk to the Metro with the kids happily munching on their crepes.

Once we were back at the apartment Jeff popped out to visit the Catacombs. The Paris Catacombs have been on his Paris wish list for a while but they are not appropriate for the kids. He enjoyed a nice tour on his own and returned home with some takeout for us to enjoy while the kids slept. Note that you should book a ticket ahead for the Paris Catacombs. If you don’t, be prepared to stand in line for around 3 hours. Those who buy tickets ahead can walk right in. The next morning we discovered another little playground across from the Porte Maillot metro station. It is a lovely little park and playground. We stopped here when we were a bit early and the boys enjoyed burning off some steam. The Middle Little also had a streak of bravery here and took on the net on his own – with some coaching from dad of course. The Little Little even enjoyed walking around the playground. The rubber floor, instead of sand, meant he could really explore on his own.

We’ve been lucky enough to visit Paris several times. I can’t resist the charm of this city with endless possibilities in terms of attractions. I loved wandering and finding little parks to play on, enjoying bakery treats and just meeting other families enjoying their typical day out in Paris.