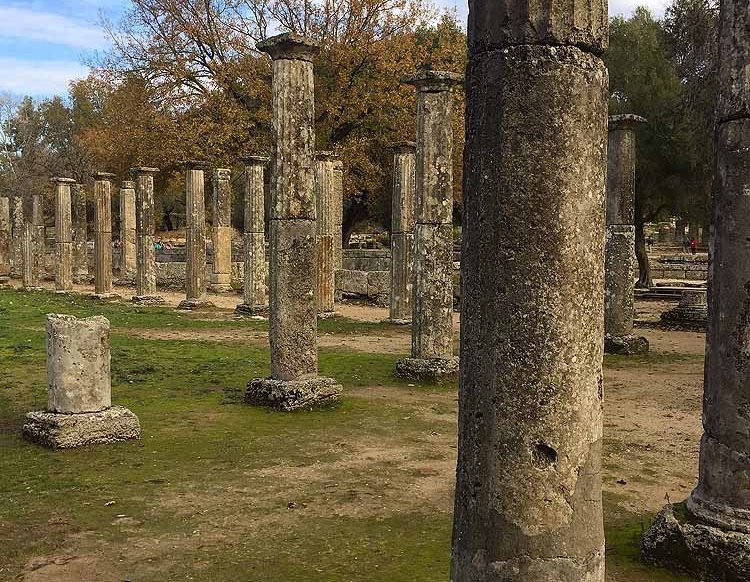 The cruise port Katakolon is your access point to Olympia, Greece (origin of the modern Olympics). MSC offered several shore excursions but we booked our own with Olympic Traveller and it ended up being cheaper, quicker and included the same things that were included with the MSC “Taste of Ancient Greece” excursion. A visit to Olympia was one of the highlights of our time in Greece. The boat docked in Katakolon at 8am and departed at 5pm. The boat dock was not near much, except a small beach suitable for throwing rocks. Jeff and our Middle Little found a few brilliant shells and a washed up purple sea star. You will need a cab or transfer in order to get anywhere other than the small shopping street in Katakolon. We brought one baby carrier and the stroller – which was a big mistake – we should have just brought the carriers as the stroller is completely useless on the uneven ground at Olympia’s ruins.

We booked our own shore excursion through Olympic Traveller and we highly recommend them!

Our private transfer met us at 8:30 just outside the gates of the port. It was an easy walk from the boat to the meeting point. The van was clean and they were able to provide booster seats for our Big and Middle Littles. The drive is about 45 min from the port to Ancient Olympia. Our driver told us all about Olympia including a few Greek Myths that amazed the kids. Our driver pointed out fruit trees, animals and more during the drive.

It is important to remember that the Ancient Olympics were a festival to honor Zeus. The site of the ancient Olympics also boasts temples and relics from past religious ceremonies. We were dropped off just as the Archeological Museum of Olympia opened for the day. It was important to arrive at opening because we beat the tour buses there. We had the museum to ourselves for the first 45 minutes. My Dad and Jeff went on a guided tour of the museum and the ancient Olympia grounds. Meanwhile my mom, sister and I, along with the kids, explored on our own. We spent about a half hour in the museum itself, guided by the Rick Steves Guidebook. This was just enough for us to get a flavor and for the kids to be amused. They loved finding the big statues, hearing the Greek legends and finding which statues were missing particular body parts. (Someone should really put together a kids scavenger hunt for this museum!) Then the real fun started! We headed out to the ruins of the ancient Olympics. There is so much here to explore and do. The Rick Steves Guide was super helpful in helping us know what was what as we explored. The ancient gymnasium with rows of columns was one of our favorites. Here athletes would train for track and field events. They would rest with their backs against the columns. We stopped to do some stretching and warm up for our Olympic events.

We saw where they light the Olympic flame for the torch relay before each modern Olympics. They use the sun and a mirrored basin to light the flame directly from the sun. This area is right outside the impressive temple of Hera. There are so many building and remains to explore here. There are bath houses and estate houses used by the likes of Nero and other emperors. There is an area where the winners were announced and the name would echo. Then you head to the area where winners stood to receive their olive wreath. Winners would be honored in their home city-state. Many were provided housing and food for life. The Ancient Stadium of Olympia was the real hit though. You enter through the same arch the ancient Olympians would have entered through. On your left as you enter the stadium are the sixteen pedestals that once held the bronze Zanes (plural of Zeus). These statues were all of Zeus and created from the fines of athletes who had cheated. The statues were placed here to dissuade other athletes from cheating. Once inside the stadium my sister ran the boys through many of the original Olympic events. They lined up on the marble starting line to run to the far end of the stadium. They practiced their long jump in front of the old stone judges area. They pretended to throw shot put. The 2004 Olympic Games in Athens held the shot put events here in the ancient stadium. They celebrated their win together and were quite tired when they finished all their fun. I do advise you to arrive early if this is part of your plan in Katakolon. We had the place mostly to ourselves for the first hour and then the crowds from our boat swept in. I assume that in the summer it is even more crowded. Without the kids and in better weather,  we could have spent most of the day exploring Ancient Olympia. There was so much to see and understand. Our tour though picked us up around noon outside the gates to Ancient Olympia and drove us to lunch at the Touris Club. We had the most incredible lunch with plate after plate of Greek food coming out of the kitchen. Our Greek guide sat with us and told us all about each plate. The kids also enjoyed tasting all the food. Everything is so fresh that we had no trouble finding things each of the kids liked. The desert though was the real treat. These fried pancakes were covered in honey and candied fruit. They were absolutely delicious. During our meal we were joined by a group from the cruise boat who had a simpler plated meal. We were all treated to a traditional Greek dance show. We were invited to join the dancing and eventually I ended up on top of one of the tables! The kids loved the dancing as there is a ton of clapping and jumping. We had a bit of time left to walk around the town after lunch. Normally this time would be perfect for seeing the Museum of the History of the Olympic Games, but it was closed during our visit. Instead we enjoyed walking through the town and viewing the lovely orange and lemon trees.  There are a few souvenir stores as well, but nothing particularly special. The town has a small playground that was perfect for burning off some energy before our drive back to the ship. The Little Little slept through most of our time in town so we were happy to have the stroller with us for him to take a nap.

They dropped us off back at the boat, well as close as you can get in the car. We walked the rest of the distance to get back on the boat. The Middle Little really wanted to go to the beach, so he went with Jeff to a rocky beach near the cruise terminal. They found a few fun specimens including a dried up sea star that has become a prized possession of the Middle Little. We pulled out of port around 5pm with a beautiful sunset. We watched the pilot boat depart the ship from my parents’ balcony room. This is something you should try to see at least once while on a cruise. It’s incredible to watch the Pilot get on or off the boat while both crafts are still in motion. It was the perfect end to an amazing day.

This post contains affiliate links. If you purchase through one of our links we get a small payment at no cost to you. We only recommend products and services we have tried and believe in.