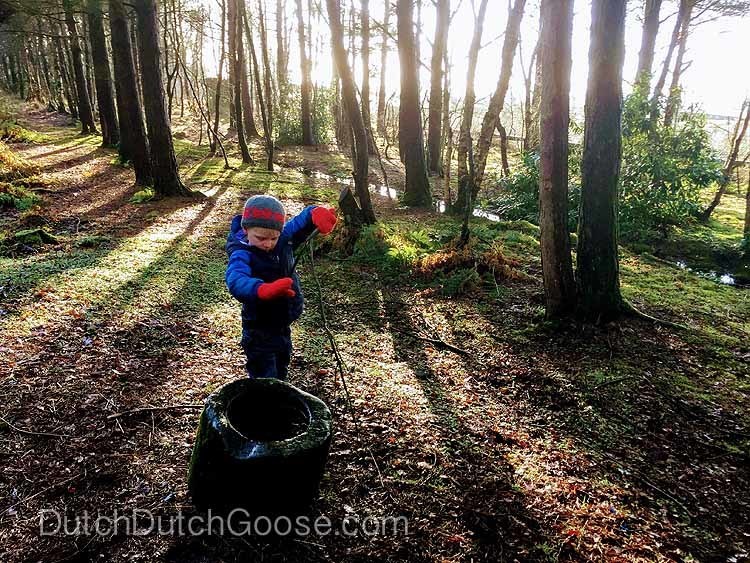 We’ve visited quite a few open air parks on our travels. The Ulster American Folk Park in Northern Ireland has been the easiest to relate to as it follows emigrants from the town of Ulster through to their eventual arrival in America. You’ll spend your time here moving from one house to the other engaging with the staff about life in each type of house. It’s engaging and fun for the kids and can be explored at your own pace. Kids under five are free and they have family pricing. (See the current rates here.)

We arrived around opening time and were some of the only visitors at the park. The puddles in the parking lot were still frozen from the overnight lows. There is an indoor section of the museum, but,  since it wasn’t raining (just cold), we headed straight for the houses. Our first stop was a single room cabin, built nearly 200 years ago, in which 6-8 people would have lived. It was quite dark inside with only a fire going for light. The interpreter staffing the cabin was quite chatty and we had the chance to learn a lot. This was the type of house people would have been living in during the potato famine in 1845. There were some traditional costumes inside that we were encouraged to try on. While we were chatting inside about the political history of the area our littles found sticks and started to explore the woods. The sun was shining and we could tell our kids just needed some free time. One of our favorite things about these open air parks is the freedom it gives the kids to explore. Our Wild Explorers Club project for the week was about finding signs of animal life, and this turned out to be a great place to do that lesson. The boys found bird tracks and also some toads. Next we popped into the weaver’s cottage. This is a reproduction building. It has three rooms, a bedroom, a weaving room with a large loom and a kitchen. A woman was working at a spinning wheel in the kitchen, spinning flax fibers into yarn. We were shown a variety of linen and wool yarns. The most interesting thing we learned is that white wool (from white sheep) is a relatively new phenomenon. Most sheep would have been brown or grey and thus your yarns took on more earthy tones. The white wool became important as dying became more popular. Next we visited the Mellon house. This is where John Mellon was born. It is also the house the entire park was developed around. John Mellon left this house when he was five to sail to America with his family. They sold the lease on the land for £200 and left Ireland for a promise of a better life in America. Family and neighbors actually held a living wake for those leaving, as you were likely to never be seen again. This really put into perspective how lucky we are to live in a time that you can travel for leisure. Inside a staff member was busy cooking. She explained to the children what a Christmas feast would have looked like inside the house. She also told the kids about the Mellon family. The boys were given several types of breads to taste. Surrounding the house were lots of farm animals. These huge geese (who would have been the Christmas supper) followed us around for a bit. We briefly popped into the 1845 school house. We were joined by this little bird who followed us all around the building. This building was moved from a neighboring town to this location. The windows were built up high so that there were no distractions for the children. School was not compulsory though as most children were needed to help on the farms. About this time everyone got hungry for lunch. We should have packed a lunch and had a picnic at the park. Instead we headed back to the main building where the cafe had just opened…literally, it was their first day as a place of business. They could only take cash and we had just enough to get everyone a bowl of soup, some chips and a toasti. The food was perfectly sufficient and tasty. If you’re heading here I think packing a lunch and supplementing from the cafe would be your best bet. Post lunch we checked out the indoor exhibits. They have a dress-up area for kids and lots of hands-on activities. We saw letters sent from the post office to many places in America we had ties to. They had an exhibit on the Titanic and also just general information on farming and life in Ulster. Then we headed back outside to check out some more of the buildings. The 1861 post office was run out of a room in a family home. These rural post offices were a vital link, particularly as people emigrated. Letters were the only way to communicate or keep track of those who had left. The Ulster downtown is lined with shops. In high season many of them are open, but in low season, we were able to peer into the windows of most of the shops and visit a few. You can pop into one of the stores and pick up some sweet treats. It is all measured out by weight and you’ll need coins to make your purchase. This was a fun little stop with the kids because they could choose their treat and watch it get put on a scale. Then it was time to board the ship and sail to America. Yes – in the Ulster American Folk Park, you spend the first half of your visit in Ulster. Then you board a mock sailing ship and sail to America. After the ship, the second half of the park is America. Outside the boat there are period toys for the kids to touch and play with, this is always a favorite stop at these parks. Once on board the ship the kids were all given jobs to do. We had to help move the sails and wash the deck. When you leave the ship you are in another downtown area, but now in America! In the American section they have a variety of log cabins and farm houses that were moved from the United States to the park. They were all dressed up in Christmas decorations. The overall message was of the prosperity that came to those who moved to the U.S. Farming in the U.S. was still hard work but there was more opportunity. Those families who stayed in Ulster continued to decline in wealth, while those who moved had more opportunities. We enjoyed peeking into these houses. There were more rooms and more space. The layout reflected more of what we are used to seeing in a U.S. house. There are also staff interpreters in most of these homes. My favorite was seeing all the herbs that were dried and kept in the house for medicinal uses. They were all so beautifully hung and displayed over the hearth.

We all felt like we had learned enough for the day. The kids were exhausted from running around and exploring. It was a good way to learn and stretch our legs before piling back into the car for a bit of a drive. The Ulster American Folk Park is a wonderful, fun, cultural stop on your Northern Ireland itinerary.