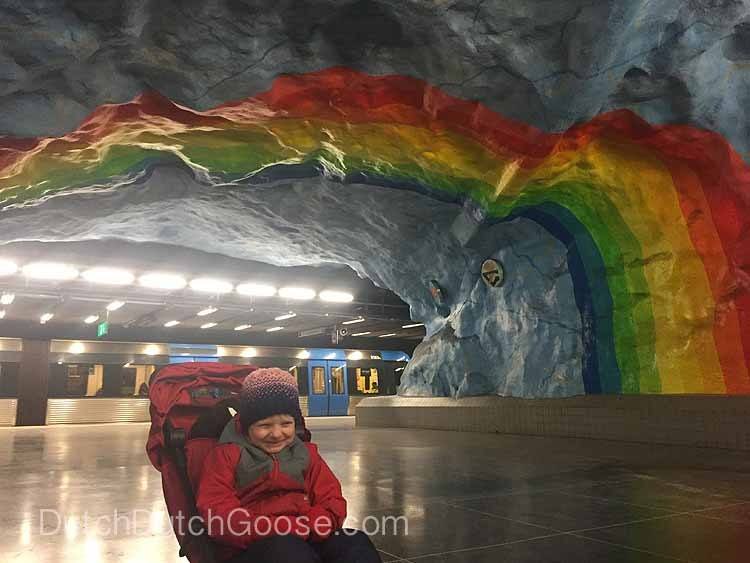 A Wintry Visit to Stockholm With a Toddler

For a weekend break in the winter, we chose Stockholm. The disadvantages are obvious: frigid temperatures, a pittance of daylight and few outdoor activities open. The advantages, however, are a bit more subtle. Flights were cheap (Amsterdam-Stockholm) and hotels were running special winter weekend rates. Plus, what toddler doesn’t love snow play? Stockholm plays host to a long list of blockbuster sights for all seasons, but this trip was solely focused on enjoying time together with my three year old boy. After arrival on day one, we took the Arlanda Express (buy tickets on platform, every 20 mins, 19 min ride, expensive) to downtown where we checked into the Kung Carl Hotel. We previously stayed at the Kung Carl and found it delightful, so while we try not to revisit properties, this quick weekend visit was more about finding quintessential Stockholm activities and less about searching for kid-friendly hotels. Nevertheless, the Kung Carl was on point. Their front desk staff was delightful and their breakfast was kid-approved. My toddler loved making his own waffles and I enjoyed the more traditional Swedish options. Our flight arrived in the early afternoon, so we had two hours to explore before sights closed for the day. We chose the Medelhavsmuseet Museum, which was small enough for my little guy to absorb (free). The mummies, statuary and archaeological exhibits stimulated our imaginations and were a great start to our visit. We then had just enough time to walk over to the Swedish History Museum for a peek (free). Here, we bypassed an upstairs exhibit (Swedish only) and bypassed an exhibit that had some graphic imagery. The Kung Carl is beautifully situated next to a vast public park with the Parklek Humlegården public playground at the far end. In the winter, this playground has a cooking area with tables you can use. The on-site staff sells hot dogs for you to grill. There are bathrooms. But most importantly, they loan out sleds and safety helmets for use on the neighboring hill. Our Middle Little giggled for hours, riding down the hill on his sled. The winter sleds are available daily 10-5 and you better believe we were standing there for opening at 10am each day of our trip. Day two of our trip was filled with kid adventures. We started our day early at Junibacken, a storybook land filled with play spaces, a 10-minute storybook ride and theater shows. The 179 SEK price was rather expensive but because we arrived early in the day we got great value in an otherwise uncrowded play area. Don’t miss the theater shows. They’re in Swedish, but that doesn’t matter for toddlers. The schedule is posted online and on the television screens at the ticket counter. Junibacken is next door to the Vasa Museum, making these two stops a perfect full-day combo. There’s a cafe at the Vasa Museum and it’s a bit nicer than the Junibacken cafe but less kid-friendly. The Vasa is a ship built and launched from Stockholm in 1628. It promptly sank – because of a roll stability problem caused by a high center of gravity (yada yada yada). It sat at the bottom of the water near Stockholm for 333 years before being recovered and restored. The Vasa Museum building was quite literally built around the dry dock where the ship was towed after recovery. There are a half dozen things to do at the Vasa Museum so plan more time than you’d think. There is a kid movie that shows in English on a schedule. The adult overview film is also shown in English periodically throughout the day. There is an English tour (30 minutes, very informative) that runs multiple times a day too. Make your first stop at the information desk to build a plan for your visit. There are exhibits for kids to touch – and the sight of a pirate ship as big as could be is a HIT for kids. For our final day in Stockholm, we spent the morning at the Nobel Museum (English tour, very informative). I initially thought this was a stop for dad but it turned out to be a stop for my Middle Little too. Just right of the ticket desk there are two kids rooms. The first contains interactive activities (think magnets, anatomy, gears). The second contains an amazingly intricate orchestral show of dancing raisins in a box. No joke. There’s also a reading corner and puppet theater in the second room. The Nobel Museum intends to move to a larger, more permanent space soon so check their website for details. They may ditch the dancing raisins exhibit so go soon. I found the most fascinating part of the museum the section that explains the ritual of informing Nobel winners and the award ceremony. Since scientists love to prank call each other around the time of Noble announcement calls, the Nobel committee now informs winners with two friends/relatives on the phone line to prove it’s not a prank. Also, I didn’t know that the award money for the prize changes each year, based on the economic performance of the investment fund. The Nobel Museum is smack in the middle of old town, flanked by a range of excellent Swedish eateries. Grab an authentic lunch before heading to what I thought was a blockbuster site in Stockholm: the Skansen Open Air Museum. I got so nervous during planning for this winter break, worrying that an Open Air Museum in winter would be miserable. I was wrong! Skansen was amazing. It had a variety of activities open in the winter. Some were inside nice and cozy spots and others were outside. Check the Skansen website before your trip as it’s chock full of opening and closing times. The place is massive so you can’t do everything. I’ll give you an example of what we did there. We visited the historic houses then the zoo. Then we visited the indoor zoo, complete with kids play area. After that, we made our way to an indoor space that was being used to showcase circus skills. My Middle Little tried his hand at plate spinning, tightrope walking and hula-hooping. Great news! He’s very unlikely to run away and join a circus. Skansen has two outdoor playgrounds. During the winter they also have an ice skating rink. They sell hot dogs for you to grill on your own, but we had already eaten lunch (excellent on-site options). After a full day, my Middle Little yet again wanted to go sled riding at the park near the Kung Carl. We also spent a few hours touring the art-covered metro stations. I found the information available online to be overwhelming. My suggestion is to buy a ticket for the metro and focus on one line. Most of the stations have art so just stop at a few and see what you see. It can make you mad planning a long route through a dozen stations to see some of the hallmark art installations. Do what you want, but I found it to be too stressful to try to catch exactly the art I wanted to see (based on Pinterest posts). It was bitterly cold in Stockholm during our visit so I had to take care to keep my Middle Little warm en route to activities. Take a hot water bottle (fill with hot tap water or use your in-room coffee maker to heat water). Wrap your kiddo in a blanket in a stroller, but don’t forget to un-bundle your kiddo indoors so he doesn’t overheat. Stockholm is an amazing city in warm weather. The parks are lovely and the water activities/archipelago are outstanding. But we found the winter to be just as charming and a bit more local feeling.