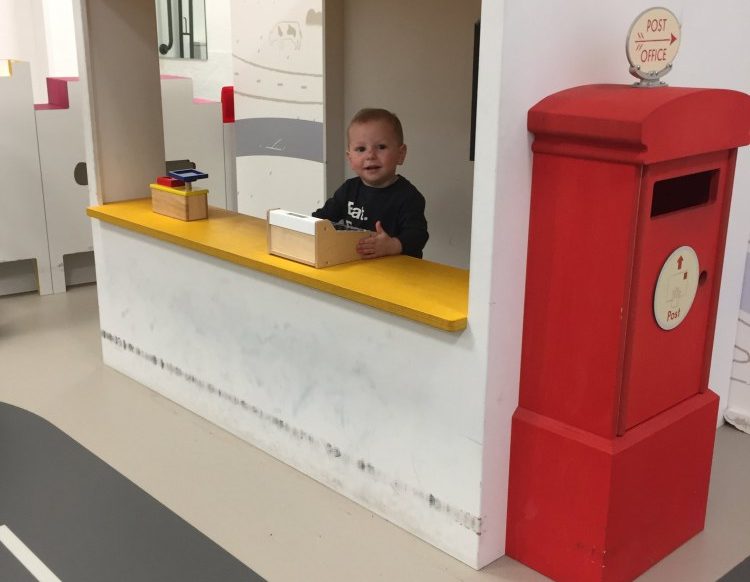 The worst part about the Postal Museum is finding it. It’s not too far from Saint Pancras actually. It’s tucked back across the street from a mail distribution center in an otherwise residential area. Once we arrived we saw that the museum is actually split into two sections. The museum on one side and the Mail Rail and Sorted play area on the other side. If you want to ride The Mail Rail or take the kids to the play area, both of which I recommend, you’ll need to make an online reservation. These two activities required timed tickets. I was blissfully unaware of this until I was doing some last minute planning the night before our train to London. I was able to hobble together some times that sort of worked and split the family up for The Mail Rail. Avoid this and just book your tickets one week in advance. The museum requires no reservation and is packed full of things to see and do with the kids. We actually ran out of time and did not see all the exhibits so allow plenty of time for the museum in addition to the timed activities. The London Postal Museum takes you through the history of the mail in London. They have cars and mailboxes from all different eras. Ask at the entrance desk for a kids packet which will keep the kids engaged on a scavenger hunt throughout the museum – you even get a prize at the end. The boys enjoyed dressing up in the different period mail delivery uniforms. They had a full length mirror and an example of someone in each outfit so the kids knew what they would need. Then they were both put to work in the telegram office. One of them had to receive the telegram and translate it. The other would place it into the pneumatic tubes and send it to the other side of the building. While we were there only one of the tubes was working, so the kids took turns running to the other end, retrieving the tubes and bringing them back to this desk. We were lucky to have some adults in the museum who were getting the tubes on the other end, pulling out our kids’ notes and writing new ones back. As it was a weekend the museum also had exhibits and actors on hand doing different things. Here my kids participated in a battle between the English and the French on the high seas. This actor was highly engaging with our boys. He had a ton of props and had them super involved as they reenacted a battle. We talked to the actor a bit and found out that he was a legit actor doing this as a side job. We lost track of time and before we knew it it was time to head across the street to the Mail Rail! We had tickets on two different trains but once we made it there the staff happily let us all board together. The Mail Rail turned the railroad that moved the mail under the city into a passenger train. It’s tight! They have a few cars for four, or in our case five, and the rest are for two persons. These trains were completely driverless, although they now take a member of staff along with them for safety. Once you’re tucked inside, the train heads off on a 15 min ride inside the old mail tunnels. These tunnels ran all over London. They were in operation from 1927 until 2003. The ride is narrated and makes several stops. Movies are projected on the walls that show how the rail to the sorting facilities worked. There is one section where they turn off the lights to show how dark it is. We warned the kids it might be dark so they were fine when this happened. Once you’re done with the train ride there is a little museum just about the Mail Rail. It shows several different railroad cars that ran on the railway and you have a chance to climb in and pretend to drive one yourself. They also have a game where you have to sort the mail and one where you control the route of the rail cars. Our kids found this all fascinating. Once again we ran out of time! Sorted is the kids play area designed for kids ages 8 and under. You need a timed reservation (45 minute slots). They only allow a certain number of children into the play area at once. There are bathrooms in this area for your use. All three of the boys found something fun to do here. The Big and Middle Little can smell costumes a mile away and ran over to get some.  They settled into the main post office building and started stocking the post office. The Little Little headed over to the smaller satellite post office where he played happily with the register. The kids all worked together to deliver mail around the town, then collect it again and bring it back to the post office to get sorted. There is a play area in the back (which I failed to get any photos of) where you can run packages on a conveyer belt. There was also a small reading nook with letter themed books. The boys though spent most of their time delivering the mail by dropping it into these houses and then collecting it again. There are a variety of mail carts and trucks they could push around as well. When we walked into the room I was a little worried my eldest (6) would get bored here, but he never did. He had fun providing some direction to the activity by asking some of the other kids to help him collect letters or drop off packages. I actually had to pull him out a little early so we could make our tea reservation. Jeff stayed and let the little two play till the end of our time slot.

We would visit this museum again in a heartbeat. It combined so many of the things we love and the kids walked away with a nice appreciation for the importance of the mail and the many methods used for delivery. It was a huge win in my book.

You can see our other great finds in London for kids here.