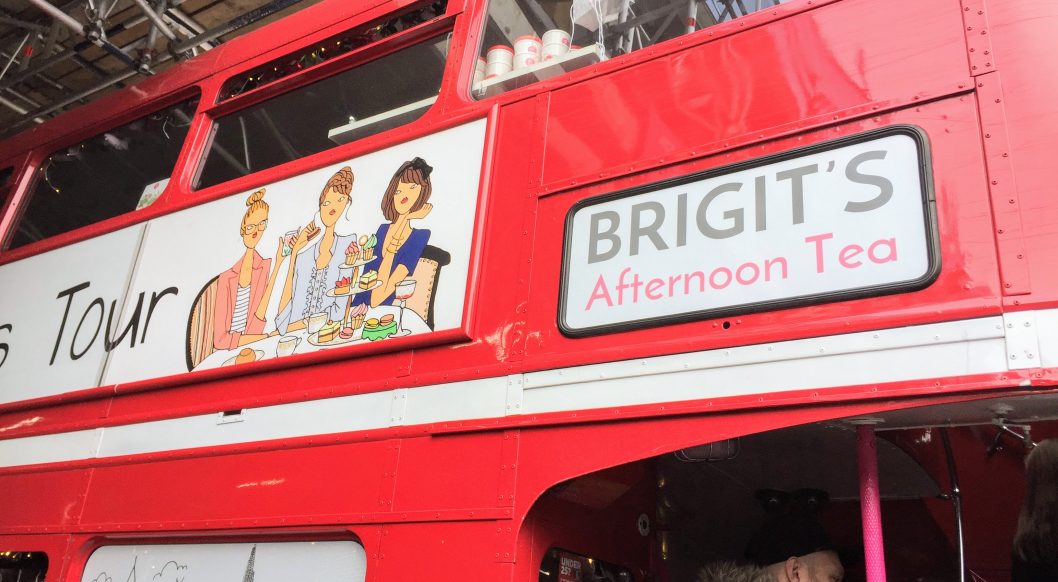 The B Bakery Afternoon Tea Bus may well be the perfect London tea for kids. It combines a double decker bus ride, a London city tour and high tea treats into one amazing outing. We happened to be in London when my Big Little turned six. He was ecstatic and had a laundry list of requests. Our favorite type of gifts are those of travel experiences so we tried to make as many of them as we could work. The Big Little is a huge fan of going to tea. It is the activity he and I pick for our one-on-one time most of the time. This London trip afforded us the opportunity to go to a “proper” tea in the Park Room’s fancy tea room. The Park Room has a kids menu and they were happy to accommodate children, but the Big Little was a bit antsy with the slow pace of tea. (Which is to be expected.) He loved doing something adult and fancy, but I was excited to have something perfect for him planned for another day. The terminal itself was crowded and only has pay toilets, which were not in the best shape. There are no toilets on the bus and the tea can last over two hours, depending on traffic. When you walk into the station you’ll check the board to find your departing gate. The B Afternoon Tea was marked in pink. We used the pay toilets before boarding and then waited at our gate till our bus was called.  The boarding process is a bit chaotic. There are several B Tea buses departing at the same time and everyone has to be sorted into the proper groups and walked out to the bus. We were moved around quite a bit before we were finally walked through all the other buses to our bright red tea bus. Here is where you can breathe a sigh of relief because the chaos is over. Once you enter the bus everything ran like clockwork. The tables were all set and ready for us. You are assigned a table when you make your reservation. The onboard staff will make sure you get to the right place and are comfortably seated before the bus departs. I was in awe of the logistics of the tea and how smoothly things ran once we were on the bus. We arrived and the tables were set with our food. All the trays and plates are set on grippers that keep them from shifting around as the bus moves through London. Most of the tables are set for four, but there are two tables for two in the front seats of the bus. These are VIP tables and both were occupied by adults who were also enjoying some champagne during their tea. (There is also a Gin Tea that looks fun!) It looked like a wonderful girls outing! Tea orders were taken and a few moments later adorable cups full of our desired beverage were placed in our hands. The little ordered hot chocolate and I tried a few of the teas. The staff is attentive and continuously checks to see if you need anything else. The cups have screw lids that can withstand just about anything. They also sit in cup holders that have been sunken into the table. The bus hit a few bumps and took several tight turns and not a thing on our table moved. (The staff was also happy to give us both some bottled water.) You’re also brought warm scones about halfway through the bus tour. The jam and clotted cream are jarred and cute as can be. You certainly won’t go hungry on this bus ride. All the treats come right from the B Bakery in Covent Garden. We chose a later afternoon tea that served as our dinner too. What really makes the B Bus Tea the best London Tea for kids though is that there is entertainment just outside your window for the entire two hours. A narration plays over the bus’s loud speaker during the drive. The narration is not constant though, so you can chat and enjoy the company of those you are with. It interrupts the music to point out major and fun landmarks around the city. The on-board staff also pointed out a few things to us along the way. The Big Little loved pointing out all the stuff he was seeing. Some of it was stuff we had done on this trip and some of it was just interesting people or places he saw, like Trafalgar Square above. We pulled up next to other double decker buses and they looked surprised to see us all enjoying tea on a bus. The Big Little exploited this and was pretending to ‘cheers’ or offer people cakes. When we were stuck at a traffic light he would try to get everyone on the ground to wave at him. It was great fun. As it was the Big Little’s birthday, they brought up a cake with a candle in it for him. (They can’t have fire on board so it remained unlit.) The whole bus sang happy birthday much to his delight . Your tour and tea end back where they started at the Victoria Bus Terminal. The Tea Bus has thought of everything though. They come around with boxes for you to take home any uneaten treats. You also get to take home your cute mugs!

We had such a lovely time on the B Afternoon Bus Tea. If you’re looking for a wonderful London Tea for kids book yourself on one of these buses. It is a great way to see the city and enjoy a London Tea with kids. The B Afternoon Bus Tea hosted us for the purpose of this review. All opinions are my own. Thanks for supporting Dutch, Dutch, Goose!