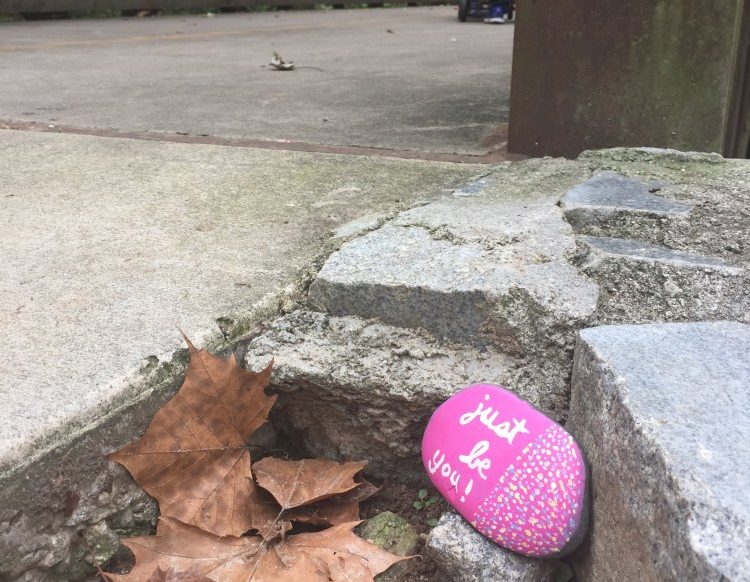 Rock painting seamlessly blended together my love of all things crafting with my love of exploring wherever we find ourselves. It is a treasure hunt that also teaches the value of being kind to others. It also seemed manageable. It was something we could all do. That was all I needed to collect all the supplies and get started.

Everything you need can be found at a craft store or easily ordered on Amazon.com.

Once you have gathered your supplies (or they arrive at your doorstep thanks to Amazon) you are ready to start painting. I separated some of the rocks and I painted the base color on. This takes several coats and the kids just don’t have the patience.

The other set of rocks I let the little ones paint the base coat. I put some color options of their choosing on a plate and let them paint each rock however they wanted.

Since we already had the painting stuff out we completed several painting projects all at once. Art day!

While the painted rocks sat out in the sun to dry the boys and I headed inside for lunch and some rock painting research. I checked out a few rock painting books from the library. We perused while we ate gathering ideas for painting the rocks.

Here are a few of our favorite books:

We talked about choosing rocks and sayings that would bring joy to those who found it. Armed with post it notes the boys marked off their favorites.

While the kids ran around the yard enjoying some outside play, I sat in the sunshine with all the books and painted the rocks to the best of my ability. There were so many to do that I ended up inviting a friend over to paint with me one evening.

Once the rocks were dry I used the Modpodge to affix the label to the back of the rock. Once the Modpodge is dry the whole rock, front and back, gets a coat of the sealant and 24 hours to dry.

Hiding the painted rocks is hands down the boys’ favorite part of painted rocks. They could not wait for these rocks to dry so we could start taking them along and leaving them for others to find.

I put half of the painted rocks into the back of our minivan, so they are ready whenever we have an adventure. The other half went into a little box near where we keep our shoes.

When we stopped at a park, the rocks were already in the trunk ready to be hidden. The boys picked out a few of their favorites to hide at the park.

Although you are “hiding” the rocks the idea is to put them where they can be found. We found lots of great places where they were noticeable from the walking path or on the playground, but only if you were really looking. There are also some general rules to keep everyone safe. You never leave them in the grass where a lawn mower might hit them. You also never leave them on private property, including stores, without asking.

One of our favorite places to leave them is at the base of  Little Free Libraries. (In addition to the rocks in the back of my minivan I also carry around a few books to trade in whenever we come across one of these.)

The boys found so many great places at the park to hide these rocks. Openings in walls near playgrounds and trees along running paths are some of their favorites. There are also plenty of tiny doors around Atlanta where people like to leave rocks.

Once your rocks are hidden you can post them on your local Facebook group if you want. Ours is Atlanta Rocks! Most groups follow this same pattern, the name of your city followed by Rocks. On these Facebook groups people post photos of rocks that have been found and those they have hidden. Some people choose to leave clues about their hiding place.

We have so far been unsuccessful in finding any rocks! We will keep looking though.

We know some of our rocks have been  “found” in the sense that they are no longer where we left them. I was just about to write that we had not heard the status of any of our rocks on any of the Facebook groups, when I decided just to pop over and check. Wouldn’t you know it, someone posted about a few of our rocks today!

One of the things I love about hiding painted rocks is teaching the kids about giving things away. They get to pick a rock to give away when we head out on an outing. We don’t have any expectation that we will see it again, but I know my kids will be thrilled when we see one of their rocks posted somewhere.

Painted Rocks for the Win

We had such a fun time painting the rocks. That alone would be a reason to add this activity to your to do list. I love that instead of painted paper we have something that doesn’t become trash in our house.

The real win though is that hiding them has been just the motivation we need when getting everyone out the door. The kids get so excited about choosing which rock to take with them to hide wherever we are heading that they forget to complain about leaving the house! That’s a win in my book.