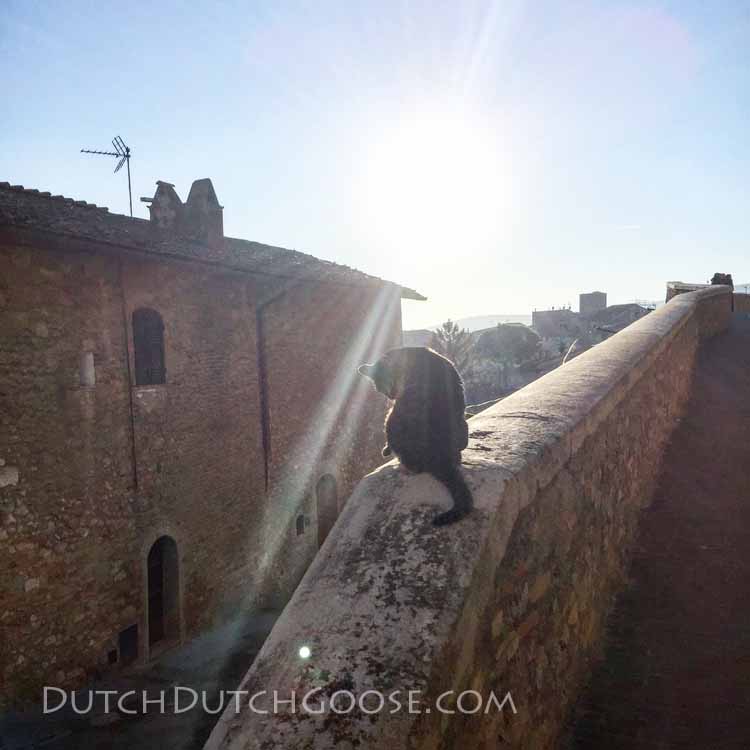 San Gimignano was a blip on our itinerary. It was quite literally a footnote just in case we had some time to kill. But as we were enjoying the meal we had lovingly cooked at our family cooking class, the hostess asked if we were headed to San Gimignano. We said we weren’t sure we had the time. Then, she insisted we go. She assured us it was only 15 min away and we would regret not seeing it. Well, they were right. (Not about the time though. It took us 25 min to get there but all the locals were blasting past us on the country roads.) San Gimignano is a walled hill town with stunning views of sweeping vistas. It’s cute, charming and a little on the touristy side. You have to park outside the city, meaning that the kids could run down the streets without us worrying about cars. At first glance I was turned off by the gaudy tourist shops that lined the main walkway. We passed not one, but two “Museums of Torture” a sure sign you’ve walked into a tourist town. We turned shortly after the second torture museum and followed the signs for the scenic route. This took us down to a wall which looked over the farmland. Turning around it gave us a view of some of the remaining towers in San Gimignano, for which the town is now famous.

Apparently everyone used to build these towers, each trying to build higher than their neighbor. All over Tuscany these towers rose in cities. Most were destroyed by wars, natural disasters or urban renewal, however 14 remain in San Gimignano. The scenic walk winds its way back up into the town via narrow streets all with views. As you approach the main square the roads are increasingly lined with cafes. Our group walks at varying speeds. When I reached the main square with the two littles, Jeff and the big little had already located and purchased gelato. My middle little took a seat and pouted until Jeff hopped in line and got him a scoop as well. With our legs rested, the group decided to head up the Torre Grosa. (Your ticket to the tower will also get you into the Civic Museum.) Torre Grossa is the highest tower in San Gimignano. It’s a steep climb that culminates in a small ladder. At the top you are treated to amazing views.

We enjoyed watching the shadows creep over the hills as the sun started to dip. These magical hours are the perfect time to be, seemingly, on top of the world. You can easily count the 13 other towers from the top. Never one to miss an opportunity to climb, our big little grabbed onto the cage protecting the bells to pretend he was a bell. Swinging back and forth in the wind. (The red on the floor was part of an art installation which also included tissue paper stuck in the walls along the stairway.) We ran out of time to explore the rest of the city. There are several churches and a fortification on the tip of the city that all looked interesting. San Gimignano is a worthwhile diversion for a half day or even just a quick stop.