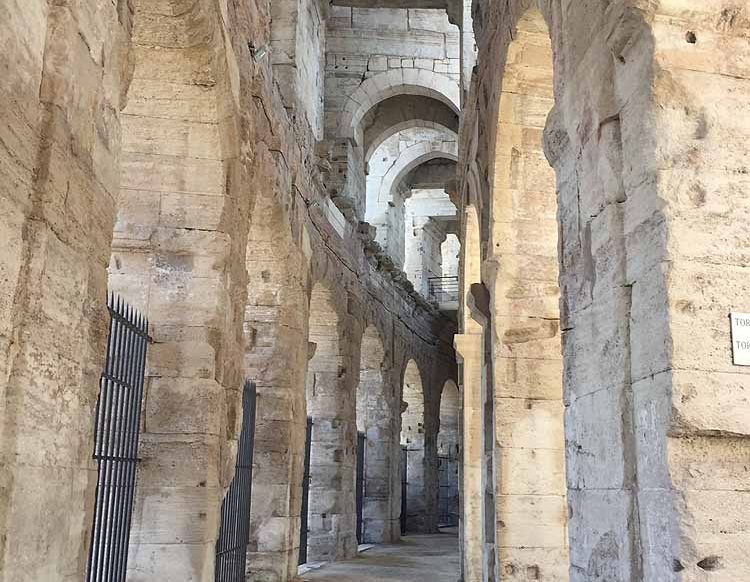 Arles, France is sure to delight everyone in the family. With blockbuster Roman ruins and a Van Gogh trail, you can satisfy historical buffs and art fans during a visit to Arles. The city is home to a Roman arena (think Rome’s Coliseum), a Roman theater, a Roman baths complex (think spa) and a cryptoportico (think underground arches that support the buildings above). There are also vestiges of Roman ruins found throughout Arles – wall fragments, bridge fragments and museums celebrating the history. We brought our Baby Jogger City Tour stroller with us for the middle little and found it mostly useful. The city has a few roads with wide stairs which the Baby Jogger handled with ease. The sites inside Arles, however, require that you park your stroller and go in on foot. On the Van Gogh side, the Arles Tourism Bureau put together a fantastic city walk that passes famous Van Gogh sites. Each is marked with a concrete block topped with a metal face that explains why the site is important. It is so cool to point at the painting on the signpost and then look at the building and street where Van Gogh actually painted. You have to use a little imagination with most of the sites, but that’s a fun activity with kids for sure. Kids just love to compare and contrast the looks of paintings then and how the city looks now – just like a real-life “find the differences” game. Print your Van Gogh walking map online before you visit. It can also be picked up from the Arles tourism office when you’re in town. If you’re planning to visit a few of the Roman ruins, the Arles Tourism Bureau offers a multi-site card. You can buy this at any of the historical sites and it’s good for 4 sites and 2 museums. This is an incredible value and enables you to visit more sites than you would have otherwise. This was the case for us. We paid a brief visit to the Roman Theater, which you can see almost entirely through the gates. I don’t think we would have independently paid for the Roman Baths complex or Cryptoportico, but with the pass, we saw more for less. The Roman arena in Arles is underwhelming. Wait – let me say this. It was a great site but if you’ve seen the arena in Nimes or the Coliseum in Rome, Arles won’t impress you. If you come in the summer you can watch bull fighting (they don’t kill the bull in France so it’s considered more humane) in the Roman arena. Still, we took two wooden swords with us and let our kids stage a sword-fight in the arena – a truly memorable experience. You can climb to the top of one of the towers (added in the Middle Ages) for great views of the region. Admission to the arena by itself is steep and the very limited English signboards makes me suggest that you visit multiple Roman sites in Arles so you won’t be disappointed. The cryptoportico, baths and theater are also lacking in signage but fantastically interesting for anyone who hasn’t seen Roman ruins. Our kids enjoyed playing among the ruins and pretended to be Romans. Give the kids a little context and they can imagine the rest. The limestone used in this region has a particularly high concentration of seashell fossils so be on the lookout for shells too!

Don’t think that Arles has a monopoly on Roman ruins in southern France. There are dozens, if not hundreds, of great sites across Provence. Beware though, by day three of Roman ruins touring you might reach your limit and start to think that all ruins look alike. Arles is incredibly walkable and easy to manage. We made several loops to accommodate opening times and hunger and were surprised how compact the city is. We loved the colors of Arles. The shutters are all painted beautiful reds and blues giving the town a colorful feeling. You won’t want to miss Saint Trophime. Rick Steves says the door is one of his favorites in all of Europe. It depicts the Last Judgement. You can also poke into the church and cloister to look around. There is a bakery just across the square from the church. We grabbed pastries and attempted to enjoy them in the square, until a flock of pigeons chased us out. We also noticed a woman leaving books all over town for people to pick up. We also discovered two great playgrounds in Arles, both are right on the Van Gogh trail. The first is in a public park and had a safari truck, castle play area and a few ride-ons that bounced. The other is by the gate and public parking, the perfect place to end your stay. We ate lunch just adjacent to the Roman Arena at a little place called Chez Felix. We met the owner and had a lovely lunch. The menu is limited but has wonderful vegetarian options. They were happy to let us share plates with the kids. They had greek yogurt with honey for my middle little, which absolutely made his day. We saw a few more sights as we headed out of town and back towards the car. This stunning fountain is a monument to friendship between two Arles natives, a historian and a painter. We parked just outside the Porte de la Cavaleri. The two remaining stone towers loom over a small paid parking lot. Free on Sundays. There is a playground here as well. Two more Van Gogh paintings are also near this parking lot. One is on the river, where you can also see the remains of the Roman bridge. The other is the famous painting of Van Gogh’s house and is toward the railroad bridge in the middle of the park.

We had an action packed morning in Arles. We felt like we had time to see what we wanted to see. If you are really into Roman ruins and want to see all the sights, or want to track down all the Van Gogh paintings you could easily spend a full day exploring Arles. However long you spend here you are sure to be charmed.