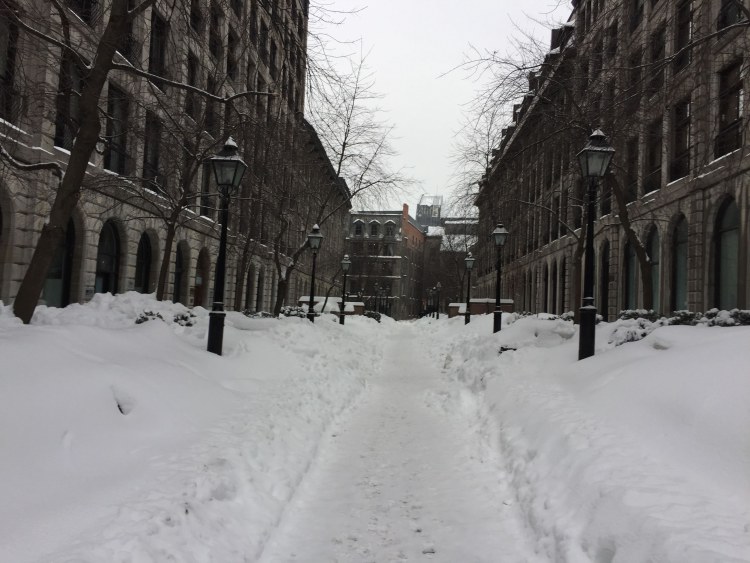 We wanted snow and we got it! We headed up to Canada this February for everyone to get their winter fill. A blizzard hit the city the day before our arrival blanketing the whole city in fresh snow. It was perfect for our Littles who wanted nothing more than to play in the snow. Luckily, Montreal offers plenty to do in the winter and is easy to get around.

We arrived by VIA Rail (read my post about riding the train between Ottawa and Montreal). We hauled our things through the snow, used the Metro and the underground tunnels to get to the Springhill Suites. I would recommend a taxi or an Uber – but my husband can be cheap sometimes. The Springhill Suites was perfectly located in the Old Town. We had easy access to public transportation and everything we wanted to do.

The public transportation in Montreal is easy to use, when you are not lugging your bags around behind you. The buses require that you have the correct change in coins. They were utterly unwilling to help us out, but we got lucky when the bus’ coin collection system accepted some U.S. coins.

The public transport system mostly went right where we wanted it to go. There is also a system of underground tunnels that link buildings and Metro stops. These are not well marked but Google Maps knows about them and thus we found ourselves traveling in them more than once.

Once we arrived in Montreal we headed to the Biosphere. This environmental museum is packed full of hands-on activities for the kids.

It is jokingly referred to as the Canadian Epcot.

There is a weird little illusion that happens as you walk toward the building. You all of a sudden find yourself within the geodesic dome. I think I expected it to have doors or something, so it was super strange to look up and find myself inside the dome without having “entered.” Also, the dome isn’t covered by glass so I expected it to be warmer inside, but you have to enter the buildings inside the dome to seek refuge from the cold.

All the exhibitions inside are in both French and English. The boys loved getting to explore and touch everything.

Each room has a different theme around environmentalism. These exhibits are on par with similar finds in Europe. The goal is to teach kids about our role in global climate change and highlight simple ways to help fight the problem.

An immersive show is included in your admission and is not to be missed. The shows alternate in English and in French on the hour. There are no seats inside the round theater and you will get a little wet.

It was Valentine’s Day, so we opted to avoid any crowds and hit the nearest 5 Guys Burgers and Fries (which you will find all over the city) with the boys. Jeff and I years ago recognized that we couldn’t always celebrate holidays and our anniversary in the traditional way. That said, a Valentine’s Day in Montreal at a 5 Guys with our three Littles is pretty memorable. Our 3 Guys were all thrilled and exhausted by the time we got home.

Montreal has such great places to eat, but with the kids it can be so difficult to really enjoy a meal. We were happy that everyone else was happy.

The next morning we walked around the city enjoying a bit of sunshine until things started to open and turn grey again.

Our first stop was the Redpath Museum at McGill University. The Redpath Museum is free (accepts donations) and open to the public. It is a natural history museum that had a bit of just about everything our kids love.

The Big little explored the rocks and gems collection, which was quite extensive for such a little museum.

The Redpath Museum also has some amazing shells and the largest seahorse collection in the world.

They had several touch items out in the animal section of the museum.

I love old museums where things are laid out in wooden cases that use the architecture of the building. The Redpath Museum felt like a smaller version of the Teylers Museum in Haarlem, the Netherlands. (Read about our trip to the Teylers Museum here.)

The Montreal Museum of Fine Arts is just a short walk away so that was our next stop. The museum spans across several buildings and actually passes under the road. Your ticket is good for two consecutive days. If you are traveling with kids you can use the ticket to come back while the kids are napping or take advantage of the museum’s evening hours.

The Little Little was a bit of a pill during our visit, but the Big and Middle enjoyed the variety of art. Modern art is always so approachable that it is usually a hit with our boys.

We were there for the end of the Alexander Calder exhibition.

The bright colors and movement really captured the kids’ attention.

The large rotating couch was also a huge win! ha!

Lunch was a huge win at Brigade Pizzeria Napolitaine, which is a make your own pizza place. We split three pizzas and some salad. It has a casual atmosphere perfect for families.

Jeff was adamant (really really adamant as he might want to work there some day) that we not miss the tiny ICAO museum. This is the organization that deals with all the international bits and pieces of aviation – like airport codes. The museum is small but interesting. It is free.

They have so many airplane models that our kids were thrilled.

They also feature some really interesting charts based on all the data they collect. Here is one that shows where the ocean is too deep for an airplane’s black box to survive. Jeff would prefer me to say “Cockpit Voice Recorder” and “Flight Data Recorder” vice black box, haha.

We worked our way back to our hotel by walking through the city a bit more. Our hotel was just a few blocks from Montreal’s Original Chinatown. (Chinatown West is the new trendy Chinatown.) We picked up some dumplings and soup from The Noodle Factory, based on some great Foursquare reviews and were not disappointed.

The next morning we headed to the Jean-Talon Market to put together our own kid-friendly food tour. We have been on so many food tours around Europe that we thought we could do a fair job hosting our own, just lacking some historical and anecdotal discussion.

This apple salesman so loved his work that he told our boys all about the huge number of apple varieties available in Quebec. He even let us buy just one apple of each type for a snack to kick off our food tour.

We stopped by all the vendors, asked about their products and bought a bite to share!

There are plenty of tables to grab a seat at to enjoy your snacks.

Even though we had made our own maple candy, we had to get one from the market as well! It is more fun to make them yourselves but they are just as tasty in the market. To make maple candy, you just heat up maple syrup to near boiling then pour it in a thick line on top of packed snow. Place a popsicle stick at one end. Wait one minute, then roll the stick across the tacky syrup.

You know we can’t pass up a cheese counter without getting a bit to taste! We also highly recommend getting one of the little containers of milk to share – it is local and so yummy!

You also must stop at one of the maple stands. You can taste all the prodcuts before you buy. We picked up some maple butter and some dark maple syrup to bring back with us.

Heading out of the market we popped into Juliette & Chocolate for some to go cups of hot chocolate. These were completely reminiscent of hot chocolate in France, which is to say it tastes like they have given you a cup of melted chocolate. We took these to go on our walk.

It was snowy but not too cold so we walked a bit through the neighborhood, on our way to St. Viateur Bagel. This walk will take you past so many great pieces of street art and interesting shops.

We expected the bagel place to have a place to sit. In fact, it is just a little shop where they are making a ton of bagels! We got one each and some cream cheese to go and took the bus back to our hotel to enjoy them. You do not want to miss one of these lovely oven fired bagels. The boys loved watching the guys making them.

No food tour would be complete without a quick stop at Tim Hortons. You can grab a double-double and a doughnut and be on the way!

When it was time to head back to the airport we opted to take a cab. We had car seats with us and it is a fixed $40 CAN to get from city center to the airport. The public bus that goes there would have cost us nearly as much ($10 each, some kids free). This was direct and did not require us to hike through the city in the snow with our things again.

If you are headed back to the United States you will process through customs before going to your gate at Montreal’s Trudeau airport. There are a few little shops once you get through customs and a small play area targeted at younger kids. Plan to arrive early enough to head through customs, but not too early as the airport doesn’t offer much to do.

Montreal is an amazing city. We would love to come back in summer but enjoyed all the winter fun it offered us.