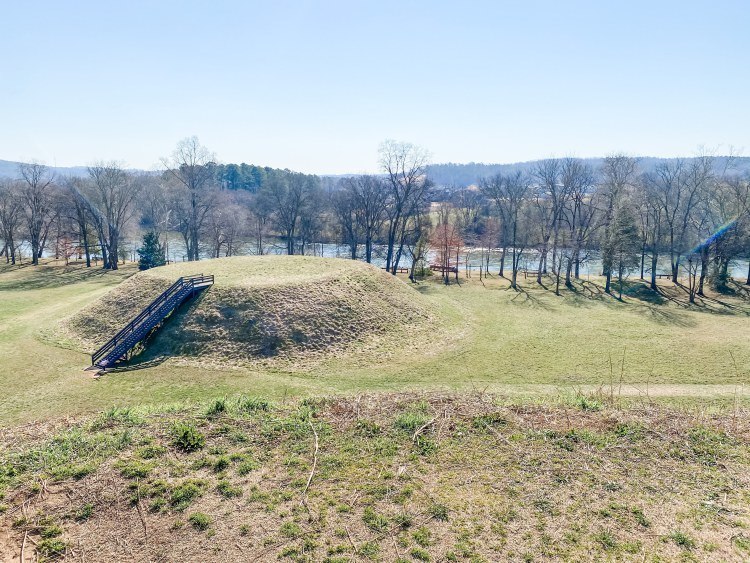 The Etowah Indian Mounds State Historic Site in Cartersville Georgia is an easy half-day trip from Atlanta, GA. It is on the ancestral lands of the Mississippian peoples, whose dependents eventually became known as the Muskogee (Creek) Tribe. We combined it with a trip to Red Top Mountain State Park, for an all-day adventure just outside of the city.

There is a small admission fee charged at the site (check the webpage for current pricing). Admission includes the small museum and access to the grounds. To make the most of your visit with kids get a Georgia Jr. Ranger packet at the entrance and complete the Geocaching activity in the museum. I’d also recommend packing a lunch and enjoying a picnic on the grounds.

Georgia State Parks have special geocaches you can participate in inside the park. In addition to regular geocaching prizes, you also look for code letters, collect enough of them and you can earn a special prize from the GA State Parks. (More information on these special Georgia geocaches can be found here.) We used the app from geocaching.com to complete the scavenger hunt inside the museum, which gives you the code to open the large geocache that is located behind the desk at the museum.

Do the geocache at the beginning of your visit. It engages your kids in the museum and made sure we learned the most important information for the rest of our visit.

Once you have completed the geocache pick up your Jr. Ranger packet. The kids worked on these while we watched the short introduction video and then we headed out to see the mounds.

Three large mounds remain on the site. They believe there would have been more when the city was fully occupied. Only one shows evidence of being a burial mound.

One of the activities in the Jr. Ranger packet encouraged one child to go up on top of the mound and speak to the rest of the group down bellow. The largest mound would have been used in this way to amplify the voice of the leader when speaking to the crowd. We gave this a try. We were able to hear the Middle Little incredibly clearly from below.

The top of the tallest mound provides a lovely view of the grounds and surrounding area. The view of the river is just lovely. There are a few benches on the top, so we spent a bit of time doing our packets up here. We also caught a glimpse of a groundhog running on top of one of the smaller mounds.

Once we saw the river from the top of the mounds the kids couldn’t wait to check it out. They loved running up and down the steps of the mounds to try to spot more groundhogs or see where the river goes.

Down by the river there were some displays about fishing techniques and the uses of the native grasses by the Mississippian people. There are also lots of beautiful benches and trees to run around and explore.

Once the boys had finished their packets we headed back into the lobby to get sworn in as GA Jr. Rangers. One of my favorite parts is that the park rangers have the kids fill in the blanks to write their own pledge and then say it with the ranger.

I highly encourage a visit out to the Etowah Indian Mounds to learn a bit more about the land and cultures that were here before the State of Georgia.