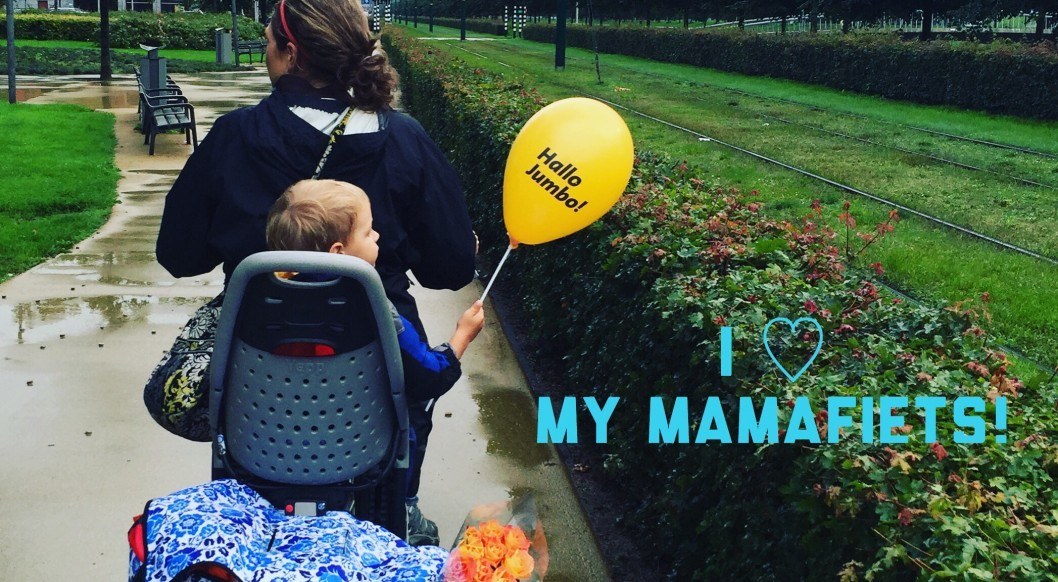 My Mamafiets! A Bike Love Story.

If you follow me on Facebook or Instagram you know I love my bike. It is currently the most Dutch thing about me. In Dutch it’s called a Mamafiets, a bike for moms. The “new to me” mamafiets, complete with two bike seats was a gift from Jeff for our seventh anniversary. He got himself a bike as well. We arrived in Delft by train just the day before and Jeff knew we needed bikes to get settled. He has a whole theory about setting up initial operations in a new location. Jeff says you first need access to money (bank account), communication (WIFI and cell phones) and transportation (bikes, public transport, cars). If you can land in a new country and get these items mastered quickly, you’ll be off to a good start. My first ride was a bit rough. My muscles had to remember what to do. I had the additional weight of both kids on the bike. Before the end of the day though I was loving the freedom of riding the bike where we needed to go. That first day I learned to use the multiple locks. I learned that my bike always stops with a spoke in the way of the wheel lock. Always!

In that first week we attempted to install the bike trailer hitch on my bike, but it caused the rear wheel to tighten so much I could only ride in first gear. That same day , while riding, a piece of the bike fell off, some sort of wheel splash guard. Not having any idea where it came from, I made H hold it our whole ride home. Jeff fixed the bike once we got home.

I rode another week to and from town before I realized I was going to need a way to carry things with me in addition to the kids. Jeff installed one of his panniers as a stop-gap solution. That worked great until it detached while I was riding through the woods. Our bakery bread tumbled across the bike path. Faithfully, H held the pannier and the bread the rest of the way home. I got an extender for my bike rack and ordered proper Dutch panniers online. They fit the rack and are waterproof. I’ve been able to fill them with flowers, groceries and even our milk jugs from the farm.

The bridges are getting a bit easier to ride over. I’ve successfully loaded the littles on and off the bike just feet from an open canal. We’ve ridden in the rain and the wind. We’ve been in bike traffic jams. I’ve had to walk the bike over a bridge I just didn’t have enough steam to make it over. I’ve even tipped over when we attempted to go up a steep hill at too slow a speed. We know who is in charge of this ride.

The kids love my bike too. They call it “our” bike. I guess that is true since they ride it as much as I do. Sometimes they are quiet while we ride. There is so much to see here. Other times they sing or scream over the road noise. H asks a line of questions about everything around us. O screams out in joy.  O rides up front and tries to ring my bell or change the gears. H rides in the back and is in charge of all the cargo. He lets me know if we’ve hit a bump or someone is “chasing” us.  They both take their duties seriously and that’s a good thing, because biking is a big part of our Dutch expat experience. You can check out a video of me on the mamafiets fully loaded with kids, groceries, flowers and a balloon on our YouTube Channel. Click the Link to check out some videos from our time here in the Netherlands.