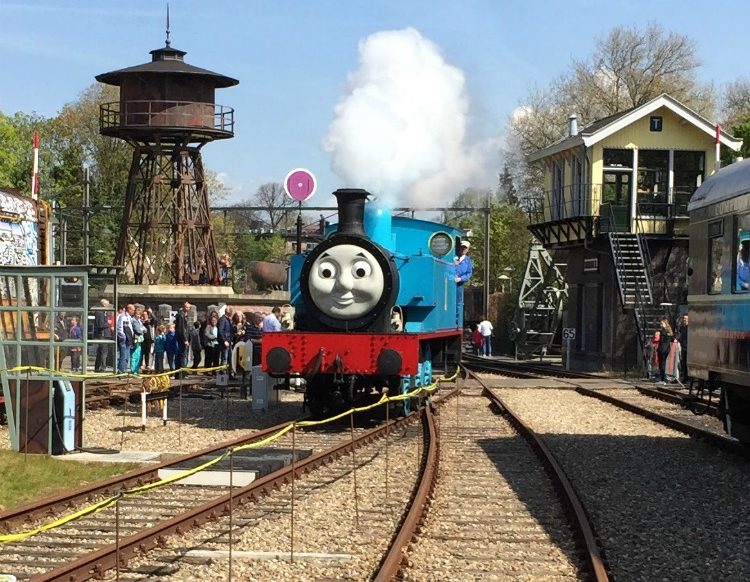 Day Out With Thomas in Utrecht

I’m convinced that everything The Railway Museum in Utrecht does is done well. We decided to attend Day Out with Thomas on the opening day since it was a weekday. Thomas weekend fell during May break though, so a weekday may not have provided much of an advantage. Lots of Dutch schools were already out on break. We arrived 10 min before opening and were one of the last cars to get into the parking lot. Although the parking lot was full the main hall was empty and we took some photos with trains straight away. (We think they put some faces onto the museum’s existing rolling stock, but this one sure looked like Emily.) The Thomas activities were well spread out around the museum. We headed right outside to meet Thomas. He “arrived” by backing up and pulling into the staton every 30 minutes and was available for pictures with “The Fat Controller” (Sir Topham Hat for the American viewers) in-between his trips. The kids loved watching him come around the corner. (Watch Thomas arrive here.) There were Thomas stories being read in one of the rooms behind the gift shop. We were there early enough that the ladies did a special reading for our kids, translating everything into English.

Upstairs there was a movie theater set up showing “Thomas and Friends” (in Dutch of course). There were bean bags for the kids to lay on and chairs for the adults. My kids made themselves right at home. There was a sing-a-long show in the main area that we watched once from up above and once while having lunch. The big highlights though for our kids were the two huge play areas of Thomas trains. Inside was every wooden train track piece in the Thomas collection and outside were the plastic trains. Just like at Chuggington Weekend, these areas are kids only. Parents have to sit outside the gates and watch the chaos. The kids took turns playing in both areas. You can see that we hit the wooden track (red carpet) early in our visit. The kids played here for an hour basically by themselves. We hit the plastic train play area (blue carpet) toward the end of our visit. It was much much busier, but you would be surprised how well behaved kids can be when adults are not allowed into the enclosure. The day was so beautiful we spent a bit of time playing on the playground. The boys love taking the boats over to the island with the lighthouse and H is even able to take them over on his own now. (Jeff went over in the other boat!)  Again, early in our visit it was not very crowded outside so we took advantage of the quiet. I’m sure by later in the day getting a boat to yourself would have been impossible. H also loves to run the pushcart on the tracks. You are able to pack a lunch and that is typically what we would have done, but this was activity number one on a long road trip and when we left the house our fridge was cleared out. The cafe at the museum always has good food. They also bring in a few extra vendors as well. I, of course, made a stop at the coffee cart as soon as we arrived. At 11:30 things started to get crazy crowded! With lots of activity areas though it never felt overcrowded. We left around 1pm though and the play areas were getting to the point that there were not enough trains to go around, which can be frustrating. So if you plan to go to Thomas try to get there early! Last year we did Day Out with Thomas in Colorado and found it to be a completely different experience. Thomas actually pulled a train you could ride on around the museum a few times but otherwise the activities were not as well organized. Specifically the play area was small and contained two train tables, leading to massive fights among the children. We enjoyed our Day Out with Thomas even more in the Netherlands.

Chuggington is scheduled to come to Utrecht in the fall. You can read about our 2015 Chuggington Weekend here.