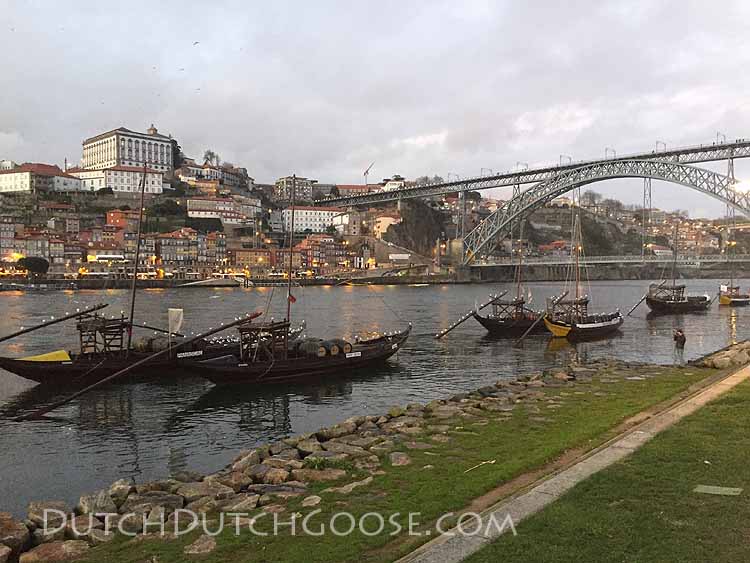 Porto was my favorite city in Portugal. The city is packed with things to see and do but had a relaxed atmosphere. We were able to walk everywhere and public transportation was easy to navigate when needed. We had the strangest hotel of the trip in Porto: Pao de Acucar Hotel. The hotel is actually located on the top three floors of an office complex. The lobby, which is full of vintage artifacts,  is tucked to the side when you enter the building. The hotel rooms were spacious as was the bathroom. We had a family room which included a double bed and a single bed. Our big complaint was a sign in the bathroom prohibiting us from doing laundry. The sign said “laundry services are provided” however the laundry service was akin to an upscale hotel with shirts costing €4 each. We had counted on doing a bunch of kids laundry in the sink and were thoroughly annoyed. The staff was nice though. They gave us directions to the car park with the best rates and made some recommendations for activities. Breakfast was provided at the hotel and was perfectly acceptable. The kids enjoyed the yogurt and pastry selection. Once we were settled in the hotel we decided to venture out and explore Porto. Our first stop was Livraria Lello, the Harry Potter library. (Read more about that here!) This is the last photo we took of our Little Little in this outfit. During this picture he had a diaper blow out, which sent us searching for a good place to change the baby and toss the outfit! We attempted to hail a cab to get to the other side of the river, however we were completely unsuccessful. Instead Jeff pulled out Google and found us a bus route that dropped us off right in front of Ramos Pinto. On the water front there is a playground (directly across from Ramos Pinto, South side of Duoro River). The kids were in serious need of some play time, so we let them run around here a bit before dragging them to a port tasting. Once our kids were sufficiently worn out we headed into Ramos Pinto. The English tours were all sold out for the day. The first person to buy tour tickets for a particular time slot gets to pick the language of the tour, and there were no more English tours headed out. That is probably for the best anyway. Instead we ordered two tasting flights and set the kids up on iPads. We got tasting cards for each Port and actually learned quite a bit just on our own. We probably should have split a tasting, but instead we leisurely enjoyed a tasting each! The boys really wanted to do the cable cars they had seen running overhead and we complied. Every other family was getting their own car but at the last moment we were joined by a guy in our car. I’m sure he regretted that decision! My kids asked lots of questions on the ride and enjoyed the views. When we purchased our tickets for the cable car we also received a free tasting voucher for another of the Port cellars. Once you unload on the top of the cable car track you are funneled over the top of the bridge. We just decided to walk home and catch a dinner place on our way. Our hotel was situated within a block of a ton of good restaurants, but we ended up at Tasco. The food was outstanding. We were seated at a table in the back with plenty of room for the kids to get their iPads out so we were able to actually enjoy our meal. Portions were small, so order more than you think you need. The next morning we got into the car and took a half-day excursion out of the city. When we got back we were ready for some city time. We parked the car and walked Porto’s streets for a bit and headed in the general direction of the river. The museum part has tons of things for the kids to touch and do. My kids are super into pirates and pirate ships so the boat displays were right up their alley. After you wind your way through the museum you board a small boat for a 20 minute boat ride through Portugal’s exploration history. You plug headphones into the boat for narration so English is available. The kids did not want headphones so Jeff and I ended up repeating most of the story to the kids. They snap a few pictures while you are in there that you have the option to purchase. I took a shot of ours, that makes us look like we’ve been caught on some sort of closed circuit security camera. Needless to say we did not purchase this lovely memory. When you disembark the boat you are kicked out into the gift shop. We wanted to ride the Porto Historic Tram, but never really figured out where it boarded and where it dropped off. Instead we followed its tracks back along the river. We hopped on the water taxi and took a short ride over the river. (Note, the taxi comes when it sees people standing on the pier. Do not be like us and sort of sit on the wall for a while and wonder when it’s coming back.) Also don’t try to take the water taxi late at night. It stops running around dusk, depending on the season. Once on the other side of the river we put those free coupons to work! We walked up off the main road to Quevedo Port Wine. Their tasting is far less fancy than our tasting at Ramos Pinto, but we enjoyed the atmosphere. They even brought out snacks for our kids when we started paying for tastings. The walk back into town over the bridge was stunning. We were in that magical hour where the light is just perfect. All these birds had landed on the water and were sitting on the old boats. This time we walked along the bottom of the bridge. It was growing dark as we crossed and we got to see Porto light up for the evening. We were hungry and all the restaurants on the water were opening up so we popped into the first one with a good looking menu. All the restaurants are pretty similar and touristy, but we had great food and sat right in a window area overlooking the water. The next morning we were up and out for a day of driving down the coast. Porto is certainly worth a visit and there was plenty for the family to do. Most tourists visiting Porto will do a day or multi-day tour along the Duoro River to visit vineyards. That wasn’t in the cards for us on this trip with kids. However, Porto had more than enough to impress us.