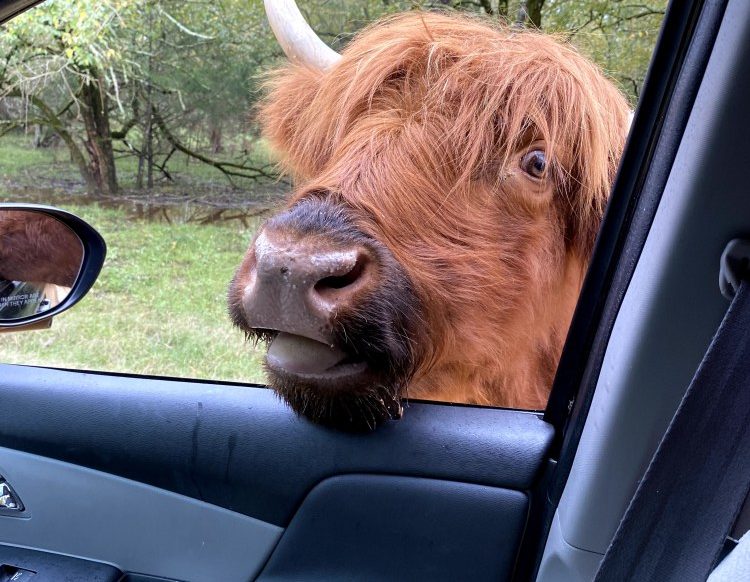 I’m on the fence about the Alabama Safari Park, not because we didn’t have a good time, but because I’m not sure how I feel about all these animals begging for food from cars. However, we went, so I want to tell you about it.

It is not our first visit to a drive-through zoo. In Scotland we visited one full of carnivores and crazy monkeys, which you can read about here. The Alabama Safari Park is much tamer. You’re mainly meeting the grazers of the animal kingdom, all living together on some old farmland.

As far as social distancing and zoos go the Alabama Safari Park is the perfect option. You never have to leave your car and you’re at least a car’s length away from all other people.

As you drive up to the zoo you pay at a pay station. The price is per person, not per car. You can drive through as many times as you want that day.

You will stop again at another window to pick up buckets of food (optional, fee). We bought three buckets of food and asked for some extra empty buckets. We then portioned out the food for each animal for the kids because these animals want to eat all the food they can get their hands (mouths) on. (We were some of the first people into the park, so the animals were hungry and waiting for us.) You can drive through without feeding the animals but that’s far less adventurous.

The kids were incredibly spooked. Ha! The Middle Little ended up standing in the back of the van so he could watch the animals from the rear window, without them being able to reach him.

The Big Little was happy to feed some of the smaller animals. We put him up front so he could reach all the way out of the window. The Little Little didn’t really want to feed any animals but was happy to stare them down.

Once the larger animals started sticking their heads in the car, and they really do come all the way into the car the Big Little bailed into the backseat with his brothers. It’s not really an activity for the faint of heart or for anyone who doesn’t want animal slobber on their clothes.

Driving is a bit complicated, so we did drive through twice so each adult could have a chance to check out the animals. (Plus we had some extra food as we were too cautious on our first go-around. The second round was a feeding frenzy.)

Then they come right over to the car for the food. Often they would sort of circle the vehicle to figure out who was going to feed them. We even had a few work together to keep us surrounded. They are unpersuaded by moving your vehicle, they just walk alongside you.

A word about the camels. They are behind a separate fence because they are mean. The lady selling the food warned us about two things – that the camels want to steal your buckets and a black alpaca named Millificent. She wasn’t wrong. These guys grabbed the whole bucket from Jeff’s hands and just took it. I don’t even think they wanted the food, they just wanted to take the bucket. Luckily, using our empty bucket method we didn’t lose much feed, just the bucket.

When you have had enough drive-through fun, there is an option to park and feed the giraffes and budgies and walk through the kangaroo enclosure.

We’ve fed giraffes many times at the Cheyenne Mountain Zoo in Colorado Springs, so we only opted for budgie food. We were disappointed to find that the budgies had a ton of food in their enclosure. The sticks had the seeds hot glued on making it super hard for the birds to get the seed off.

There is certainly a lack of oversight at this zoo. I sort of walked away feeling really sad for the animals. On the plus side though, you have a really healthy appreciation for how large they are.

I’m also still in total awe of the zebras – they were so incredibly cool!

Do plan to detail your car after a trip here. There was spilled food and animal drool all over the car. I couldn’t stop thinking about what animal had left the mess. This is a great activity for a rental car.