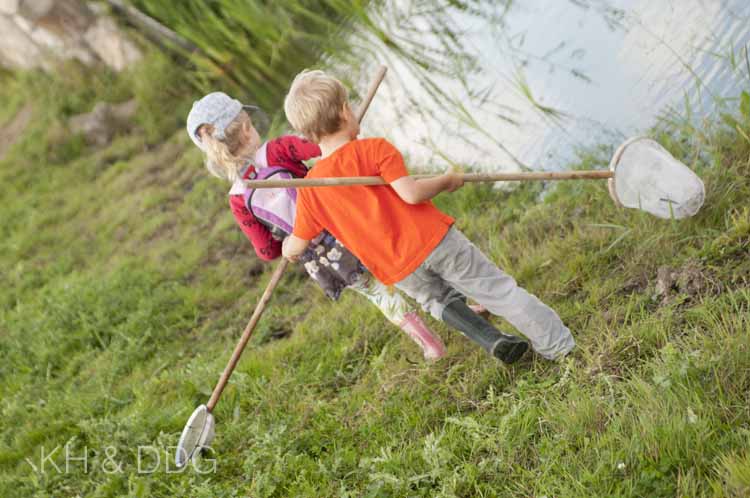 Despite the weather we know fall has officially arrived in Delft when its time for our favorite event, Biesland Dagen. This farm festival was one of the first events we attended when we moved here in 2015. (Read about our experience last year.)

What a difference a year makes! This year the weather was perfect. Both the boys were at ages to really enjoy all the fun so we attended both days and we had so many friends to share our time with. Saturday the festivities did not start until noon. We had a large group that biked/walked over together from our house after enjoying a fun and chaotic breakfast. There was plenty of bike parking set up everywhere. Saturday we parked the bikes at the entrance to Hoeve Biesland, while Sunday we chose to start on the other side of the festival, parking in the field adjacent to Cafe du Midi. The kids really wanted to go “fishing.” In the small canal adjacent to the farm they were all set up to let the kids explore. There are so many little snails, bugs and amphibians that can be found just by skimming your net in the water. The kids literally never tired of this activity. They would walk up and down the canal looking for the perfect spot to dip their net. I even got in on the action helping on the banks of the canal to identify our catch. They had volunteers and cards available to help with identification. (This activity was only available on Saturday.) The farm opened up part of the barn for some hay play! The kids climbed up the haystacks and slid down. There were ropes to climb and swing on. Even the little ones (like O) got in on the action. The farm also had a large setup of food vendors. Saturday we ate at Cafe du Midi and Sunday we sampled the food vendors. The pulled pork sandwiches were my favorite while the kids loved their pancakes. The hayride fills up quickly so we loaded up all the kids and some of the adults walked to the other side of the farm in trail of the tractor. On our walk I grabbed a coffee from one of the many vendors and enjoyed a walk through Hoeve Biesland’s garden. It was fun to see what they are growing, and will soon appear in the farm store. We also checked out the many vendors set up at the entrance to the farm. My favorite olive oil vendor was there, so I bought a few bottles to tide me over till the next farm event. When we met back up with the group the kids were busy playing croquet, but instead of mallets they had wooden shoes on sticks! This quickly devolved into the kids running through the large croquet obstacles!

We ended Saturday with some canal jumping fun! Jeff has been wanting to try this since we moved here so he was thrilled to get the chance. Once he had it mastered we literally could not stop him from jumping over and over. Sunday the weather was not quite as nice with rain threatening most of the day. We arrived early to the far side of the festival to pick up where we left off, which ended up being mostly animal fun. Our first stop was the bunny barn where there were baby rabbits the kids could hold. Little O spent nearly an hour holding the baby bunnies. He would snuggle each of them! When the ponies showed up we were first in line! O was a bit nervous but was all smiles during the ride. H was a total natural and needed no encouragement. I think he may be ready for a larger horse ride! There were also chickens you could hold. These ladies were a bit too wild for the kids, but Jeff was able to hold them so the kids could pet them. Again, O just wanted to love on them. A nature arts and crafts project was also available in the children’s area. The paper had a sticky center (double-sided tape) and the kids picked plants, rocks and sand to cover the sticky part. I loved that both kids were able to do this simple project with such different results. The children’s area also included a variety of traditional games with a Holland twist. This toss the beanbag into the shoe was one of our favorites. There was also a station to practice your cow milking. The boys actually got quite good at it.

Once we met up with some more friends we hopped on the tractor back toward the farm. There was a variety of produce for sale on the farm, and we made sure to get a little bit of everything since it all looked so delicious. The gourds were H’s absolute favorite. He loves fall! We let him pick out one for each person in the family, including a little one for the new baby. While we were shopping the little boys found some more animals to love! haha. They loved watching the chickens in the coop. Instead of taking the tractor back from the farm we decided to embark on the adventure course across the cow pasture, which included many methods of crossing the canals that keep the cows in place. This little bridge also had a swing you could try, but we decided that was not a good idea for the little ones. We did mistakenly let the kids board these foam “boats” with the dads and attempt to go across the canal. The big kids did ok, you can see them disembarking the raft in the background. Poor Jeff and O though were really unstable. Jeff was able to get O to the shore and sort of toss him to us before his boat blew further down the canal. The kids basically thought this was the best thing ever though!

We were sad to end another day at the farm, but we were all quite exhausted from all the fun. This is certainly an event we hope to attend again next year! My friend Karen is an incredibly talented photographer and took photos of the whole group on Saturday. Many of those photos are featured here. If you want to see more of her incredible work you should follow her on Instagram.

If you’re in the area this is a great event you shouldn’t miss.  Follow Biesland Dagen on Facebook so you’re the first to know about next year’s dates.